The upcoming release of the Linux distribution elementary OS 6 is going to be a big one, and with a huge focus on usability, it's getting another big feature. On top of system wide Flatpak support, and proper dark style system support, the elementary team have announced multi-touch gestures in elementary OS. As always, it really sounds like a huge amount of effort is being put into to making elementary look great.

Multitouch gestures is a feature that is often not particularly great on Linux, but elementary OS 6 will have much expanded support for it. It won't be perfect and so more complex gestures won't be available until a much later release. Complex gestures are planned though. The elementary team are working with developer José Expósito, the creator of Touchégg, which is a Linux multi-touch gesture recognizer. In elementary 6, they will be using the Touchégg Daemon to communicate with their own window manager. 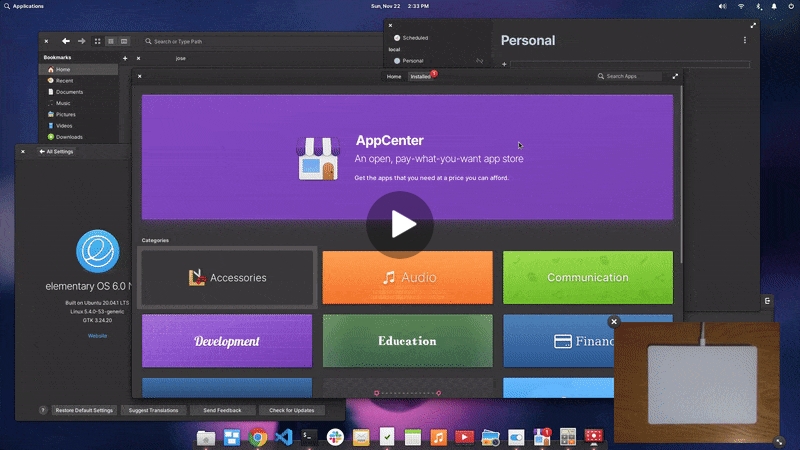 Currently they're aiming for a multitasking view gesture and one for switching workspaces directly. Each of which they say will use "1:1 responsive, finger-tracking gestures that can be peeked or canceled at any time". Seems like it will be configurable too as they're adding bits into the System Settings so you can pick the gestures you like or turn them off.

On top of that they're also hooking up Handy, a library developed for Purism in order to make these gestures work across different applications on the elementary OS 6 desktop rather than emulating keyboard shortcuts. They say it's a lot more work but will provide a "vastly superior experience".

The amount of effort the elementary team put into the finer things is impressive as always.

See their full post on it here. Check out elementary OS here.

Article taken from GamingOnLinux.com.
Tags: Distro News, elementary OS, Upcoming
10 Likes, Who?
We do often include affiliate links to earn us some pennies. We are currently affiliated with GOG, Humble Store and Paradox Interactive. See more here.
About the author - Liam Dawe

I am the owner of GamingOnLinux. After discovering Linux back in the days of Mandrake in 2003, I constantly came back to check on the progress of Linux until Ubuntu appeared on the scene and it helped me to really love it. You can reach me easily by emailing GamingOnLinux directly.
See more from me
Some you may have missed, popular articles from the last month:
5 comments
Nick_Avem 2 Dec, 2020
View PC info
Wow, that looks sexy! Another great DE with multi touch is GNOME + Wayland.
0 Likes

StenPett 2 Dec, 2020
View PC info
Elementary 6 will go on my laptop once it's released! It's the best looking OS out there by a long shot, and it'll be interesting to see how it has progressed since I tried it last, back in early '19.
0 Likes
Purple Library Guy 2 Dec, 2020
"Egad, Holmes, my multi-touch gestures are working without a hitch! What is this operating system?"
"Elementary, my dear Watson!"
3 Likes, Who?

View PC info
I hope this release that they add proper drawing tablet support since the last time I tried elementry os they had a program in beta but all it could really do was detected the tablet so I had to configure it in terminal which is not user friendly.
0 Likes

Absolutely. I'm using Manjaro Gnome with Wayland as my laptop daily driver at work and those gestures are terrific. As great as KDE is (and I use it on my desktop), I couldn't go back to it on my laptop. The Gnome Wayland gestures are that good, and they already are more complex and configurable than it sounds like Elementary is doing above.

Now all we need are smoother and more performant Gnome Wayland animations to go with those gestures...


Last edited by iiari on 4 December 2020 at 6:08 am UTC
0 Likes
While you're here, please consider supporting GamingOnLinux on: