The best Linux distros for gaming in 2021

For newer Linux users or people looking to switch, it can be a minefield to try and find accurate and up to date info on what Linux distro to game with. Here to help. What is the best Linux distribution for gaming? It's actually not a tough question.

With how far Linux has come in only the last 2 years, you can play a seriously large amount of games now. Sadly, there's some (quite a lot actually) places out there that seem to slap a new date on old crusty articles and give really bad Linux gaming advice. Most of the people writing these types of articles elsewhere clearly don't use Linux - I do, and I have done for around 15 years now.

Let's start off with what not to do shall we? First off, don't bother with SteamOS from Valve. Currently, it's out of date and has been for some time now. It hasn't been properly updated since 2019! Valve are not working on it but they might return one day. Anyone suggesting it likely has no idea what they're talking about and any website listing it is junk.

Next: Ubuntu GamePack or any "specialized" Linux gaming distribution. You can throw almost all of those types in the trash. They really don't do anything normal Linux distributions don't do already and they can often introduce their own special bugs. I consider them like the old discs you would find in the bargain bin in a local PC store. You really don't need them, don't waste your precious time.

The answer is actually really simple, it's not a long list and you have two really easy choices: Ubuntu or Pop!_OS. With their LTS versions (Long Term Support), you can use them as a safe bet for years. 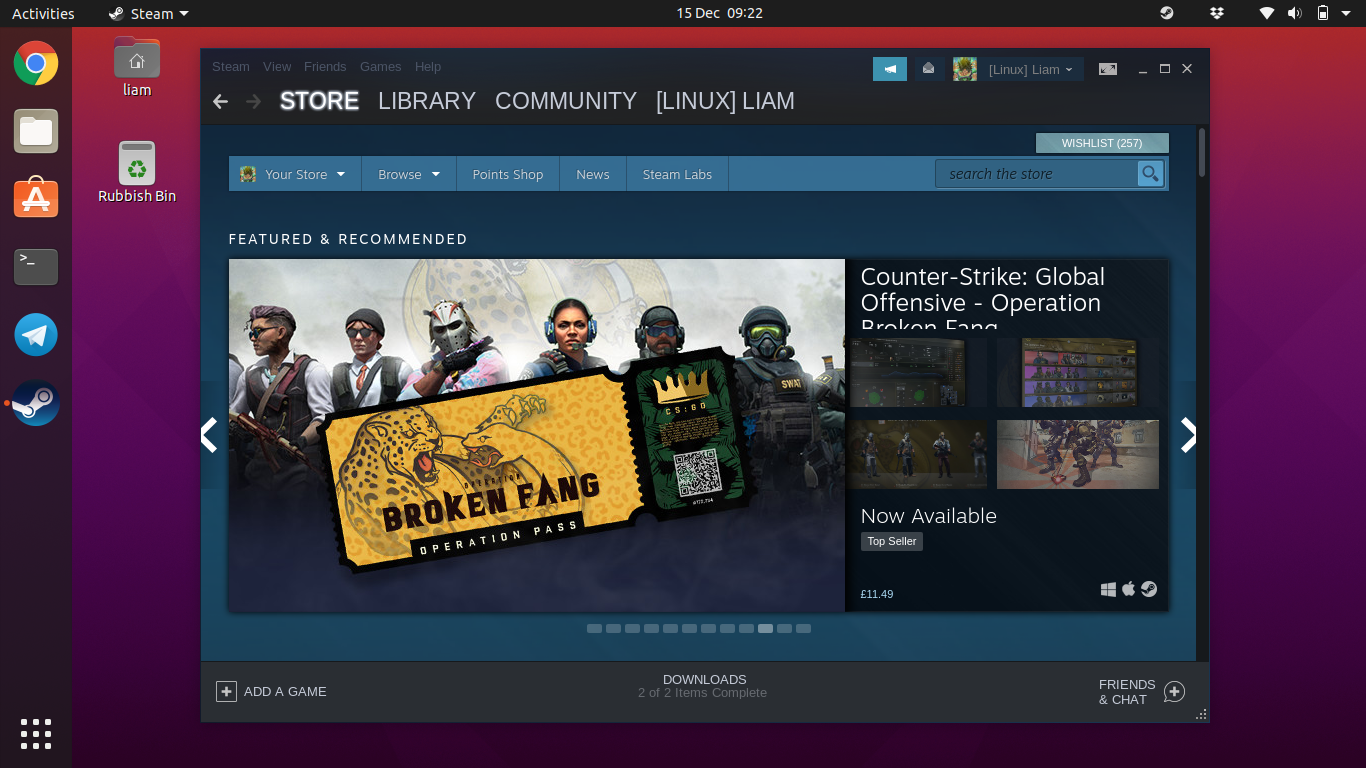 Why those? Well, Ubuntu is almost always the most widely used Linux distribution by normal desktop users. On Steam, it has always been on top as the most used distribution by gamers - there's an obvious reason for that too — it works. It's what I always recommend to newer users because it's like a warm cuddly Linux blanket. It's easy to find answers for, and it's not complicated to use. As for Pop!_OS, it's based on Ubuntu and since System76 sell desktop Linux hardware with it you can be sure it's also well tested.

If you do want a specialized distribution, perhaps for a console like experience that SteamOS was supposed to offer then take a look at ChimeraOS. It offers up a good big-screen experience for Steam.

Apart from that, everything you need can be easily installed directly on Ubuntu. Steam for the biggest library of Linux compatible games and for the Steam Play Proton compatibility layer for playing Windows games on Linux, Minigalaxy for GOG games, RetroArch for emulation, itch.io has their own client too for lots of indie gems and the Lutris game manager for everything else. It's really easy to get going too, on Ubuntu you just need to open up Ubuntu Software and search for Steam and it does it for you.

Don't make it complicated for yourself. I say all this as an Arch Linux user, which is a bit of a long-running joke about you always knowing who an Arch user is as they will tell you - and oops, I just fell into it. I'm saying it for good reason though! I have been through Arch Linux, Manjaro, Fedora and more and I still consider Ubuntu to be the number 1 Linux distribution for getting going quickly especially if you're not too comfortable yet.

Keep in mind that just as macOS and Windows do have plenty of issues, so does Linux. Don't expect perfection, be prepared to learn a bit and do things differently. If you need help, we have plenty of resources available for you. We have: a Forum, a Discord, IRC, Matrix, Telegram. You will find answers across there, with the Forum being the best way because search engines pick up answers from forums and do not from social chats like Discord.

Lastly - have fun and keep on gaming on Linux.

We do often include affiliate links to earn us some pennies. We are currently affiliated with GOG and Humble Store. See more here.
About the author - Liam Dawe
I am the owner of GamingOnLinux. After discovering Linux back in the days of Mandrake in 2003, I constantly came back to check on the progress of Linux until Ubuntu appeared on the scene and it helped me to really love it. You can reach me easily by emailing GamingOnLinux directly.
See more from me
Some you may have missed, popular articles from the last month:
The comments on this article are closed.
125 comments
Page: «2/13»

View PC info
For me, the best distro is the distro that:
- first point and the most important in my eyes: it is a distribution that is forgotten, the fewest possible bugs, stable, secured, pleasant to use and on which I am productive.
- regularly maintained
- follow the standard so that when you install an application or game, its behavior is the same as that of another Linux distribution

This is the opposite I'm recommending everybody in the Steam forums (for any distribution). Because the distribution makers have the same package and more knowledge of their distribution than the user or even Valve. Is this claim based on anything?

In Mageia (mageia.org) installing Steam via the distribution repository starts a script that fetches the latest Steam client from Valve and installs it. Works flawlessly for me since Steam came out for Linux. Doing it this way ensures that all the necessary dependencies are installed prior to installing the Steam client, I guess.
3 Likes, Who?

View PC info
I'd recommend Mint over Ubuntu as I've seen fewer problems with it and new users take to it like a duck to water. That said, I've never looked at Pop because it came out after I was thoroughly disillusioned by the deb package format.
8 Likes, Who?
Odisej 15 Dec, 2020

Quoting: OdisejMy experience with Ubuntu 10.04 was not great. Steam was not working out of the box and such.

True, true. Corrected, thanks. Decades just fly by too fast. :)
2 Likes, Who?

Quoting: FauconNoirWhy everyone is talking about Pop!_OS ? What is so cool about it compared to others like Ubuntu or Manjaro for example ?

Ubuntu took / is taking a strange direction again (snap packages) which is bothering to say the least. It relies on proprietary server, is pretty much canonical locked in and is technically not that good. It is - like often with canonical - a rushed solution trying to reinvent what was already ongoing (flatpak, called xdg app at that time) but cutting every possible corners to go faster. Result is bloated install size, unclear sandboxing capacities, very slow first (but not always only the first) startup times, and overall opacity on what you install on your computer since it comes from a locked in source.
A good example is that sppotify packages, where upstream only updated it like once or twice this year which is reflected in the flatpak, but snap had multiple version for god knows what reasons (most likely only marketing purposes).
Also since snaps are basically full blown containers, not only do they tend to be more bloated, but as most users point out, the window styles and co do not integrate with host at all, which gives a sense of total lack of polish to the experience.
And as a final nail to the coffin, while it is supposed to be universal, it only really works/is adopted on ubuntu ... Whereas flatpak works everywhere, including ubuntu.

So yeah, Pop OS took what is good (PPA etc), and threw away what is bad (snap, in favor of flatpak) hence the recommendation.

As for comparison to Manjaro, that's another story. You lose the PPA (but gain AUR) so it really is a question of preferences. Also Manjaro used to be less stable, although it seems to have gotten better. I would say it has matured a lot from my last tries. But now, would I recommend it over Pop OS for beginners? good question. Probably not yet, as I'm not sure there is as much resources available (Pop profits from all ubuntu too).
For more advances users, I do think I would recommend Manjaro for all its possibilities and bleeding edge sw. Also for being unpatched and thus allowing you to run custom kernels (scheduler/event driven patches) depending on your needs.

Another source https://www.urbandictionary.com/define.php?term=naff and so on. Pretty common where I am from, I forget that English slang can be an acquired taste. Basically, naff = a bit rubbish.

Every time I have tried Ubuntu in the last 3 years I have had lots of problems.

I run Manjaro in my main gaming pc and it's been running great for 2 years, always updated. I did have a kinda serious issue but it was only once, shit happens. 99% of the time everything is a click away, no effort. My Win10 gives me way more headaches so there's that.

Still I don't recommend Manjaro. The more I know about them the less I like using this OS. I'm planning on moving to Arch soon but well, you never get around to do it.

I know nothing about Pop!_OS so I can't say anything about it. I did run Linux Mint for a while with no issues, I only left because they dropped KDE.
7 Likes, Who?

I used always the distro package and never have any problem!
One problem if you use non distro package, ist that, you'r game dir will be different and something may not working whell, like UI or in game graphics.
1 Likes, Who?
«2/13»
While you're here, please consider supporting GamingOnLinux on: