The day has finally come for Intel, as they've now formally announced the first dedicated Xe GPU with the Intel Iris Xe "DG1". It's a huge thing for Intel, and it's taken them a long time to get here.

Sadly though, this first push is not for people building their own systems. Instead, they've teamed up with ASUS and Colorful to offer entry-level GPUs in their pre-built systems. Starting off at the low end makes a lot of sense though, so they can keep pushing and tweaking as needed before trying to capture a bigger slice of the market. 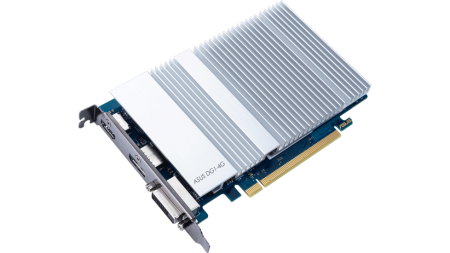 It actually appears to be based on the same parts as the Intel Iris Xe MAX, with Intel saying they "saw the opportunity to better serve the high-volume, value-desktop market with improved graphics, display and media acceleration capabilities" and this is the result of that.

An important announcement though, and the beginnings of more competition for both NVIDIA and AMD which the market really does need. Once we hear news on the Intel Xe HPG (the gaming GPUs), we will let you know, they've not given any fresh timeline HPG yet.

See more on it here.

Need a job? Intel are currently hiring for a Linux 3D Graphics developer! You would be responsible for "developing support for new features and enabling new platforms for 3D drivers on Linux, including having best in class support for OpenGL and Vulkan on our GPUs" and this includes working with Mesa. It's in Poland and seems like they're not accepting remote positions for it.

Article taken from GamingOnLinux.com.
Tags: Hardware, Intel, Jobs, New Release
22 Likes, Who?
We do often include affiliate links to earn us some pennies. We are currently affiliated with GOG and Humble Store. See more here.
About the author - Liam Dawe

View PC info
More options are great, but somehow I feel this will be used to tackle AMD, and NVIDIA will remain unchallenged.
5 Likes, Who?

View PC info
what's the performance of this? I expect to be better than a 1030 by it's size I guess since a 1030 is low profile. Performance of 1040 would be great (it doesn't exist yet)

View PC info
Interesting beginnings. It is just the beginning and we have no idea of the performances yet.
0 Likes

thewho 27 Jan
View PC info
Off-Topic: Having some Intel-Lenovo-Laptops (X450 X250) Where i get multiple display-freezes while surfing in the Internet. Disabling GPU-Acceleration in Chromium helped a bit.

Found multiple similar issues from other people where they mention the "bad Intel" drivers.
I always thought the Intel OpenSource drivers were of very good quality. Did i miss anything? Or it's only with old chipsets?
0 Likes

grigi 27 Jan
View PC info
assuming its the same arch as what's in tiger lake, we know it will perform pretty much exactly that fast.
less cu's more clockspeed and bandwidth.

View PC info
One of this with 30W TDP for a small server on a CPU from AMD without GPU, to use with Jellyfin for Hardware decoding and Nextcloud for Image Recognition would really hit the spot for self-hosted hobbyists.
1 Likes, Who?

View PC info
I'm really looking forward to these Intel desktop GPUs because Intel GPUs usually work with FLOSS distros such as Trisquel. These may not be super gaming cards but as far as what GPUs are available for that niche they kick the crap out of the Intel UHD GPUs and a GTX 780 Ti using Nouveau so it's a step in the right direction.
1 Likes, Who?

View PC info
Updated article with a note on a Linux job currently going with Intel.
1 Likes, Who?

Quoting: LinasMore options are great, but somehow I feel this will be used to tackle AMD, and NVIDIA will remain unchallenged.

Both will remain unchallenged for a while to be honest, Ironically its AMD's IP that they are using.
0 Likes

View PC info
Colorful said they are not working on a Xe GPU right now. People just assumed that as the coolerdesign is identical besides the color to an existing colorful cooler.
1 Likes, Who?
1/2»
While you're here, please consider supporting GamingOnLinux on: