Valve launch a Beta for Remote Play Together - Invite Anyone, no Steam account needed

Now this is the kind of thing that makes me a fan of Valve as a company, as they continue to build up interesting features that are genuinely cool. Introducing a Beta for Remote Play Together - Invite Anyone.

Remote Play Together is the system on Steam that allows you to host a game on your local PC and invite others to join you, and they don't even need to own the game. It's a way to turn local co-op / multiplayer games into an online supported title and play with others. Super useful, as there's some awesome titles out that that don't natively support online play. Remote Play Together - Invite Anyone is an extension of this, allowing you to host a game, copy a link from your friends list and send it to anyone you know to play with you and they don't need a Steam account.

Quite a huge deal this, enabling even more people to play games with you easily.

The invites work through the Steam Link app, which has one big caveat at the moment: Valve doesn't currently support a normal Linux desktop with it. Steam Link with Invite Anyone links is supported by Valve across Windows, iOS, Android, or a Raspberry Pi. We have emailed Valve to see if the Steam Link app will be brought over to Linux proper, will update if / when they reply on that. Update 25/02/21 17:15 - Valve has confirmed to us that Steam Link app is coming to Linux proper. Valve press told us over email "it is in the works" but they "don’t have a target release date to share just yet".

Just load a game, make sure you're set to online and then copy the link and send it to someone: 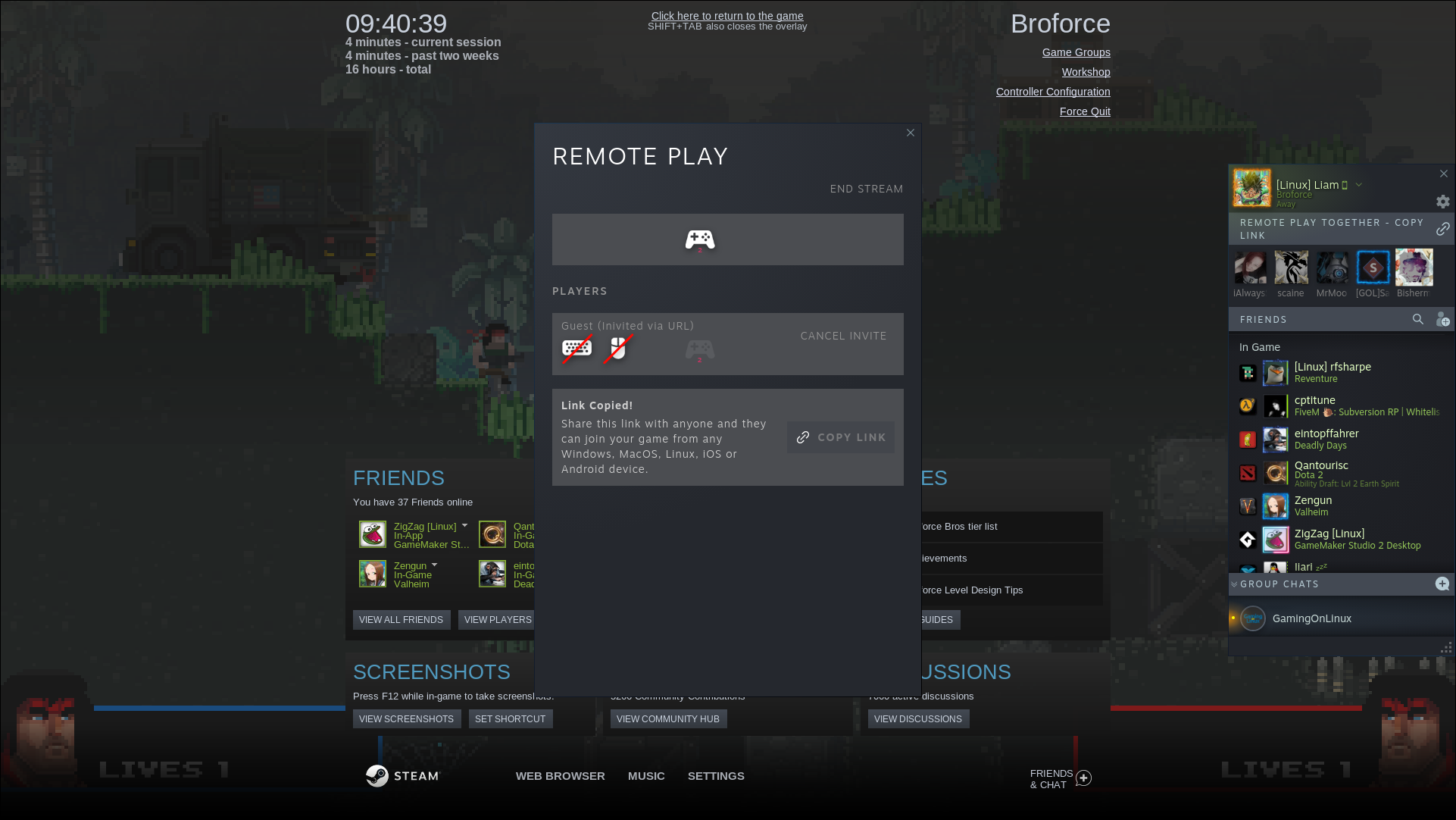 Once they have your link, it only takes a few seconds for everything to load in. It works surprisingly well too, although that will depend on how the game handles input and your networking. Some games aren't very good with it, some are perfection and feel awesome.

If their device doesn't have the Steam Link installed, they will end up seeing something like this inviting them to go and download it:

Testing over here was done by copying the link from our main Linux desktop, and then joining via the link on a cheap Android phone and — yep, it works alright:

To try the system you need to have your Steam Client opted into the Steam Beta. Full details in this post.

We do often include affiliate links to earn us some pennies. We are currently affiliated with GOG and Humble Store. See more here.
About the author - Liam Dawe
I am the owner of GamingOnLinux. After discovering Linux back in the days of Mandrake in 2003, I constantly came back to check on the progress of Linux until Ubuntu appeared on the scene and it helped me to really love it. You can reach me easily by emailing GamingOnLinux directly.
See more from me
Some you may have missed, popular articles from the last month:
The comments on this article are closed.
18 comments
Page: «2/2

Quoting: Liam DaweUpdate 25/02/21 17:15 - Valve has confirmed that Steam Link app is coming to Linux proper. Valve press told us "it is in the works" but no "target release date to share just yet".

I am hoping whatever is being developed sorts out the issues blocking it running on Pi4s with LibreElEC. Would love to have a combined media and game system.
0 Likes
Purple Library Guy 25 Feb, 2021
I was thinking "No Linux? That's terrible, c'mon Valve get on it!" but then looking at the article it seems like it works on Linux as long as you have the Steam client. Suddenly the size of deal shrank way down.
I mean, this wouldn't stop most Linux gamers from using it, since most Linux gamers already have the Steam client anyway. There are some who don't because they object to Steam's DRM, but surely that objection would extend to this service. So, if you'd use this you already can because you have the Steam client, and if you don't have the Steam client you wouldn't use this.
Still be good for them to get it handled, but feels way less urgent than I first thought.
0 Likes
Linuxwarper 25 Feb, 2021

Quoting: jrtI think optional Game streaming can be a good thing (for example to bridge the time with GPU shortages)

Game streaming as a option is undoubtedly a great thing! Noone can dispute that. With streaming you can buy a slim and cheap laptop and still be able to play major games. The issue with streaming is actors trying to monopolize it and tell you how and where to stream your games. Not unlike what Microsoft is doing with local releases. I hope Valve's streaming becomes better and better because I sure want them to succeed knowing their streaming option is one that gives you the most flexibility as of right now.

View PC info
This kind of stuff is the reason why Steam is still the undisputed king of PC gaming and the rivals aren't even in the same league.

Valve will remain the king of it's domain as long as it can keep up such fantastic and useful innovations that genuinely make gaming on PC better.

As for Linux support, I think we have no reason to doubt that Valve is indeed working on that and the only reason why it isn't available at launch is probably because it simply wasn't ready in time. No sweat, I have no doubt it will arrive in good time.
3 Likes, Who?
LegendOfMiracles 26 Feb, 2021
Stupid Idea: Couldn't we port the rpi app to docker, because docker has excellent arm support on x86.
0 Likes
Mal 26 Feb, 2021

Quoting: jrtI think optional Game streaming can be a good thing (for example to bridge the time with GPU shortages)

Game streaming as a option is undoubtedly a great thing! Noone can dispute that. With streaming you can buy a slim and cheap laptop and still be able to play major games. The issue with streaming is actors trying to monopolize it and tell you how and where to stream your games. Not unlike what Microsoft is doing with local releases. I hope Valve's streaming becomes better and better because I sure want them to succeed knowing their streaming option is one that gives you the most flexibility as of right now.

Valve is in a unique position, if it wants, to give us a streaming service where we still retain a reasonable control of our game licenses. I.e. Buy Steam game, play it on your rig and/or on steam streaming.
Instead any other streaming solution a la Google or Amazon will invariably tie your game license to their own streaming service. The day you stop paying subscription you lose everything. It's the infamous video streaming model brought to the gaming world.
0 Likes

View PC info
If any gaming service goes to a monthly rate then they better be giving us free games to play, like we get free movies to watch with Netflix and Amazon and they rotate through with new stuff all the time. That is the only possible way I would pay monthly.
0 Likes
«2/2
While you're here, please consider supporting GamingOnLinux on: