Need a casual game to get you through the day, or perhaps to mess with on another screen? Note: developer provided a key to us.

Koi Farm released recently and it's quite a little gem. It's a small game though, all about raising Koi with an "infinite number" of patterns you can create by cross-breeding all the different colours and you end up with lots of different mutations as you go along. You can pick them up, drop them between a big display pool and a smaller breeding pool and eventually let them go to swim on with their lives. On top of that, you can also turn them into special cards to stick in your book and progress through it. 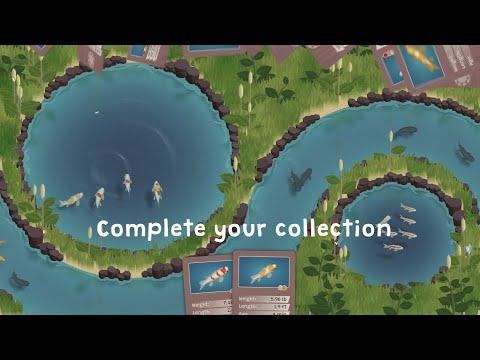 It works well, looks nice and enables you to just chill out so it hits the mark nicely. Starting off with nothing, you quite quickly end up with a ton of fish of all sorts of wild varieties. If you love the simplicity of idle games, or you just love collecting things - this is probably the ideal casual game for you.

Quite a beautiful idea that I hope to see expand. As it is, it's a really nice chilled-out experience but it gave me a real needy feeling of wanting the same idea but in a much bigger setting with more to do. According to the developer, they do plan to open source it eventually too so perhaps people will join in when that happens.

View PC info
Solike. I bought a property many years ago. It was huge, and had aviaries and koi ponds in the back yard. It was cheap because it was a dodgy area.

Anyway, the koi ponds were empty, except for one lone solitary fish. Wife and I named him Napoleon and decided to set him free among his own people. The only place we knew of that had koi was the public park in the city which was 2 hours drive away.

So we scooped Napoleon into a pot and drove him all the way there. The moment after I dropped him into the water, a security guard was like, "Hey! What are you doing!!!??" So I just pretended to take some litter out of the water. He did not ask about the pot.

It was hilarious, but um, I guess you had to have been there.

Koi story over, thanks bye.
3 Likes, Who?

There's something really fishy about that story.
1 Likes, Who?

There's something really fishy about that story.

I left out some details. I was being koi.
1 Likes, Who?
While you're here, please consider supporting GamingOnLinux on: