V3DV Vulkan driver for the Raspberry Pi 4 keeps on improving

Soon, the Raspberry Pi 4 will become even better with the constant improvements being made to the V3DV Vulkan driver.

Writing in a blog post to give us an update on the progress, developer Iago Toral of the Free Software Consultancy company Igalia talked about moving from older games to modern games for their testing. A lot of the testing before was on the Quake trilogy but now they're checking against Unreal Engine 4 samples like the shooter demo.

Initially on High settings at only a 480p resolution they were only about to hit 8-15FPS so clearly room for improvements. One part of the problem was shaders being more expensive on modern games. With the work being done Toral mentioned it benefits OpenGL as well as Vulkan since they share the compiler stack which is where the optimizations were focused. The end result of the compiler work is quite a big performance increase: 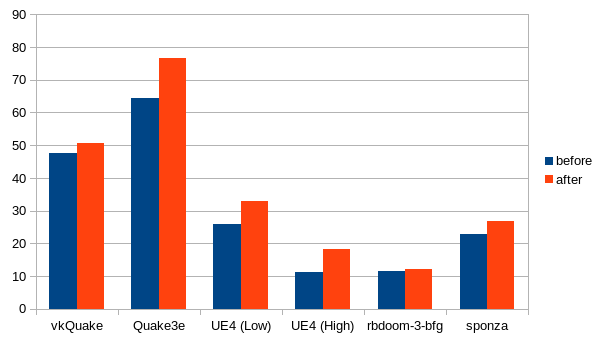 Gaming on the RPi4 is about to get a whole lot more interesting.

Plenty more is still to be done as the work was focused on compiler optimizations but work is also ongoing to improve other parts of the Vulkan driver. One part that may be worked on in future is a shader cache like other drivers have, since modern games often build up shaders as they go which causes stuttering but then it's smooth on future runs. For the RPi4 though, such a feature needs more thought perhaps than just doing it, since drive space can be a bigger issue.

QuoteFor the RPi4 though, such a feature needs more thought perhaps than just doing it, since drive space can be a bigger issue.

Mesa has recently introduced a single-file shader cache option, which can help decrease file sizes (especially if a fast compression algorithm is used as well). Perhaps they could look into doing something like that.


Last edited by Calinou on 18 March 2021 at 6:24 pm UTC
0 Likes
While you're here, please consider supporting GamingOnLinux on: