The text-based Pro Wrestling Sim will be coming to Linux

Pro Wrestling Sim is an Early Access text-based pro-wrestling booking simulator and the developer has confirmed they will officially bring it to Linux later.

You've played text adventures, games where you swipe left and right on cards and all sorts in between but what about a booking simulator? In the the game Pro Wrestling Sim you control a wrestling promotion, decide your roster, and create storylines, feuds and matches where the winners and losers are in your hands. 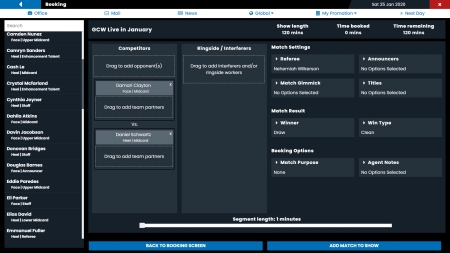 On the subject of Linux support, the developer confirmed on a Steam forum post that they didn't want to do it yet while it's in Early Access "but it will come" - you can't get much clearer than that. Good news too, since early user reviews are giving it a rather positive look.

View PC info
I've bought it already and tested it through Proton. The whole thing is based on the Electron framework, so porting to Linux should pretty much be a no-brainer.
0 Likes
While you're here, please consider supporting GamingOnLinux on: