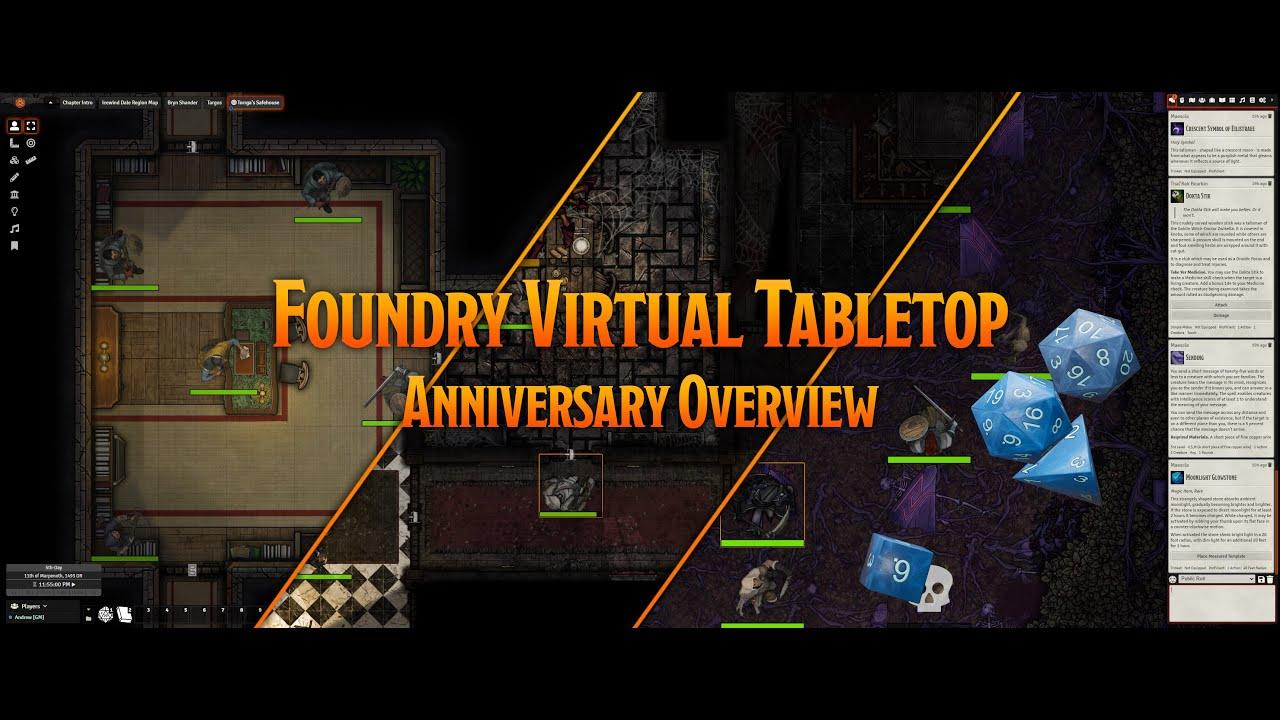 property 3 Jun, 2021
View PC info
I've been using FoundryVTT for a year now and its just great. With Foundry and Owlbear Rodeo around there is just no reason to use Roll20 anymore.

However, if you are using a lot of modules you should be using 0.7.10 (the previous stable release) for the time being until every developer has had the time to update.
0 Likes

View PC info
Yeah, I too still need to wait for module authors (and the Pathfinder 1e system module) to adapt to the new stable release.

I've been using Foundry for, yeah, also a year now, for two of my three groups. I'm still on roll20 on the third, and I really start to get annoyed by roll20 now :P. I'm so much happier with Foundry, it works really well.

One thing I'm really looking forward to with the new version is better playlist handling. At least I *think* that made it in this release, I saw it being shown in a dev twitch stream. Because right now, creating a new playlist is pretty terrible: it's multiple clicks to add each track. With the change, I should be able to just import a whole directory into a playlist, I hope.

There's a few glitches I should probably report, though. I haven't yet figured out how and why, but sometimes, some of my players can see behind the fog. As in, suddenly, a room they shouldn't see, far from where they are, is revealed, as if previously explored. I too can then see it when I click their token to look at their view.

Another thing that came up is that suddenly, dice rolling is really laggy for one player. They perform an action that does a roll, then they wait for a minute or more for the "dice so nice" 3d dice to show up, then another minute for the roll card to show in the chat window. That one only happens on Firefox with them and is gone with Chrome. (But other players, and I too, use Firefox without any problem.)
0 Likes

Quoting: DrMcCoyYeah, I too still need to wait for module authors (and the Pathfinder 1e system module) to adapt to the new stable release.

Ahoy! As one of the developers on the Pathfinder 1e system, I can say that, unless you're using the Unchained Action Economy optional rule, it's working pretty well with the new version of Foundry.

The bug for the Unchained Action Economy has been fixed by now on the master branch, but it still needs to be released.

That said, I won't deny I'm a bit of a scatterbrain. I happen to have been the first to create a PF1 system for Foundry, but I'll admit that I'm probably not the best person for the job.
2 Likes, Who?

Quoting: FurysparkAhoy! As one of the developers on the Pathfinder 1e system

Quoting: FurysparkI can say that, unless you're using the Unchained Action Economy optional rule, it's working pretty well with the new version of Foundry.

Ah, okay, I'm also behind in checking everything, then :)

But I'm also still waiting on a few other modules, so I'm not necessarily in a rush to update. Btw, do you happen to know what happened to the Bullseye module? It's gone from the modules list and even the repository has been deleted completely.

It basically gave me a list of which tokens my players targeted, so I could have it right there in one view without having to hunt for those bobbles on the tokens.

Quoting: FurysparkThat said, I won't deny I'm a bit of a scatterbrain. I happen to have been the first to create a PF1 system for Foundry, but I'll admit that I'm probably not the best person for the job.

Eh, I for one am pretty happy in general with the Pathfinder 1e system in Foundry. There's a few things I don't like, but that's personal preference for the most part.
1 Likes, Who?
shawnsterp 3 Jun, 2021
Does everyone in the party need to buy the software, or just the dm (the one hosting)?

EDIT: Nevermind, they answer this at the end of the video. Just one person in the party needs the software. Sounds like I should get this....

Quoting: DrMcCoyI'm still on roll20 on the third, and I really start to get annoyed by roll20 now :P. I'm so much happier with Foundry, it works really well.

I'm curious, why is the 3rd group still on roll20? Is it just the typical reluctance to change? I am on roll20 right now, and I hate it lol.
0 Likes

The first two groups have some overlap in players and we split the price of Foundry. It's also running one of my player's servers. While the third group is a complete distinct group of people and they don't really know the people from the other groups.

If I ask, the people from the first two groups would probably be okay spinning up a new instance, or I could just put it on my own netcup server too. Heck, I do have another Foundry licence due to supporting the Patreon too. It's mostly just that I lack time and energy (either social or technical) for that.

Also, I'm running a long-ish campaign with the third group, and I've already set up a lot of things in Roll20 I'd have to migrate. The player characters too, and they need to migrate their macros as well, so that's a bit of a roadblock as well. (And yeah, of course the longer it runs, the more stuff there is to migrate, I'm aware.)

None of these things are all that "dire" or complicated, but so far just staying is the path of least resistance. It's also not like Roll20 is bad-bad, it's just that it's less comfortable and lacks some features I'm missing.
2 Likes, Who?

Quoting: DrMcCoyBtw, do you happen to know what happened to the Bullseye module? It's gone from the modules list and even the repository has been deleted completely.

I can't say I've ever used that module, but from the description I just saw of it, it sounds like you might be looking for the module Smart Target as a possible replacement.

That said, I don't really use Foundry's targeting mechanics myself that often, so I don't have much experience with modules altering them or making use of them.
0 Likes

View PC info
The last group I used to play with was in Roll20 and I didn't like it at all. Would love to try other VTTs but my take on 5e is usually casual, so it's usually difficult to find parties. Ok, let's face it, my abilities to even search for parties is crap lol
0 Likes
1/2»
While you're here, please consider supporting GamingOnLinux on: