I'm now a true convert after using a Vertical Mouse

After using traditional PC mouse for most of my computing life, I decided to finally see what all the fuss was about with a Vertical Mouse and I'm sold.

I've been through a lot of mice over the years from cheap stuff with no branding, to the "gamer" stuff full of RGB lighting and more. Not only that, I've used Trackball mice before and found them interesting to try but thoroughly weird and just too bizarre to keep going with. After growing up with the likes of the Amiga, I've pretty much seen it all when it comes to inputs like this.

Why the change? Well, a little known fact is that I have a permanent injury in my main hand (skateboarding hurts, kids). Often it causes issues and longer periods of using a traditional mouse really quite badly brings out the pain. After researching for some time and gathering some opinions, I went for a Vertical Mouse to see if it would make a difference — and I'm a little bit blown away.

The model I went for to test the waters was the CSL TM137U from CSL-Computer (Amazon), which only cost £13.99 so it felt like a reasonably entry point to try one out. 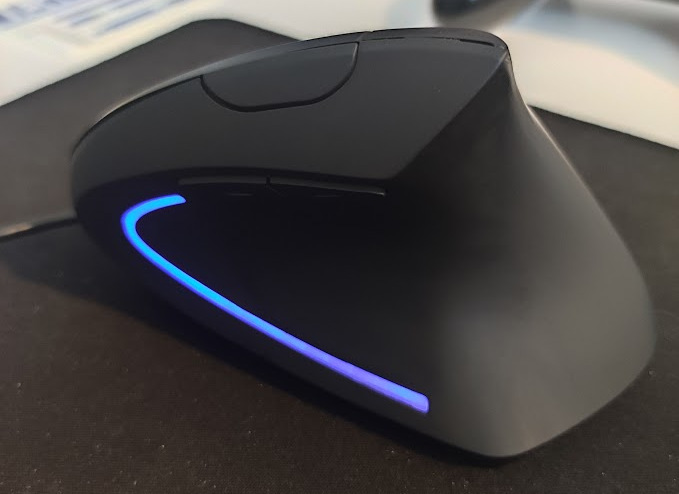 As it turns out, there's a lot of variants of this design and model, with Anker being one of the most well-known and both the Anker version and the CSL were highly rated, so I thought I couldn't really go wrong with it. As it turns out, it seems CSL simply have an unbranded version (sold out) of what Anker sell so they're pretty much the same. CSL was just the cheaper option at the time.

The benefits of using a Vertical Mouse are surprising. Instead of flattening your arm which twists your muscles around (causing some strain), it gives you a nice handshake-style grip that just feels so much more natural and ends up reducing the strain often felt using a traditional mouse. You don't feel the need to clinch your fingers up on the main buttons because there's no need with how your hand rests on it too. I don't want to jinx anything but honestly, it's completely stopped any hand and wrist pain I was having - it's absolutely marvellous for that.

So it sorted out my main issue but is the mouse overall any good? After using it now for a few weeks I have a few thoughts on it. Overall, it is a genuinely good mouse. However, there's a few points for me that go against it:

Minor gripes aside, overall it's a good choice to start with if you're looking into picking one up. With a single-click button to switch it between 1000-1600 dpi it works well there for different uses. Two extra buttons by your thumb are ideally placed too, makes switching back and forth in your browser easy and using them in games is great too. On top of all that, it looks pretty nice too.

I've enjoyed using it so much that my Razer DeathAdder Chroma is going off to the retirement home. I shall continue using this, at least until a find a slightly smaller version.

We do often include affiliate links to earn us some pennies. We are currently affiliated with GOG and Humble Store. See more here.
About the author - Liam Dawe
I am the owner of GamingOnLinux. After discovering Linux back in the days of Mandrake in 2003, I constantly came back to check on the progress of Linux until Ubuntu appeared on the scene and it helped me to really love it. You can reach me easily by emailing GamingOnLinux directly.
See more from me
Some you may have missed, popular articles from the last month:
36 comments
Page: «2/4»

View PC info
I used that Anker for a while, and it was pretty comfy and nice. Although, mainly due to gaming, I ended up with a logitech MX Master 3 a few months after that, and never went back.
0 Likes

View PC info
My GF is using a vertical mouse as well as her hand strains very easily (and always did). Really helped her with that.

I don't really have that problem, so I just don't feel the need to try it out.
Who knows, though, like most other people, I don't get younger.
1 Likes, Who?

View PC info
I bought an Evoluent vertical mouse a few years ago and gave up on it after a while. The size made it inconvenient and was slightly too big for my hand, the middle click was uncomfortable for similar reasons to Liam’s, and I never could get the same precision as on a traditional mouse. It was like it threw my x/y axes off-kilter, plus I had hard time setting the right movement speed. I pulled it out to give it another shot a couple months ago since my hands were doing poorly, and within an hour I felt them get even worse, so it’s dead to me now.

Maybe another model would serve me better, but I’m not the kind of person to keep buying tech and throwing it away until I find the right one. Currently I alternate between a standard mouse and a graphics tablet, since holding a pen/stylus also changes the arm rotation. I’d be curious to try a trackball someday, since I find using my laptop’s trackpad reasonably comfortable.
0 Likes
Purple Library Guy 4 Aug, 2021

Quoting: ZlopezI recently got myself Logitech MX Vertical, because wireless mouse is better fit for my ergonomic solution and it's a really good mouse.

Lefties need to remember that vertical mice are definitely not interchangeable between hands. And of course we lefties are an afterthought, if a thought at all. So for instance, that website lets you add one of those to your cart--simple, easy, no fuss. And no left-handed option. Left-handed ones of those may exist, but they're not making it obvious.

I went for a Wacom tablet as mouse replacement several years ago also due taking off some strain off my hand. Works cool once you get used to it, also for lefties :).
Obviously it is not suited for gaming with the exception of the likes of Civ or point & click things (absolute positioning!), but therefore I’ve settled with a controller (or wheel).

(Tbf, I hope at some point that tablets with a 21 by 9 aspect ratio become available, haven’t seen any yet)
0 Likes

Quoting: Purple Library GuyAnd of course we lefties are an afterthought, if a thought at all.

Well, to be fair. Left handed people are sinister...

View PC info
Using the CSL wireless version for years now, love it just 2 complains:
The coating will slowly flake off after 2 years or so, I need more thumb buttons for gaming...

Edit, actually a 3rd one:
1 of my 3 mice so far had scrolling problems after ~1 year, sometimes up registers as down for just 1 tick and vice versa which makes for jerky scrolling. Cleaning could mitigate it but not fully remove it.

View PC info
If there was one at the quality of my G604 mouse I'd be interested. But it looks like price would be quite a bit higher.
0 Likes
«2/4»
While you're here, please consider supporting GamingOnLinux on: