When I was growing up, one of my first exposures to Linux was my father’s stack of old Linux Journal magazines. Printed in several of these was one of many advertisements by the Linux server company Penguin Computing, this one depicting Linux mascot Tux brandishing a rocket launcher in the iconic Q3DM7 map included in the demo version of Quake III Arena. This image became so emblematic of Linux as a gaming platform that it still gets widely circulated to this day.

When I switched to using Linux full time in the spring of 2007 one of my first accomplishments was getting that same demo to install. I remember being frustrated at not having it work on first launch, until I discovered I had to copy my system's libGL.so.1 file to the install directory, one last caveat brought on by the need to support both 3dfx as well as more generic OpenGL accelerator hardware. From that moment on, my Linux box became a gaming machine.

It was not until later that I would discover the full effect Quake III Arena had on the Linux ecosystem by downloading and playing the numerous derivative games created from the 2005 source code release available in almost all Linux software repositories. Even with all of those other options it was the original game I always found myself coming back to, with my main listed frag count now exceeding 21,000 frags as of the time of this writing.

The bedrock of almost all the LAN parties played in my household, Quake III Arena also became a trusty reliable for when I felt the urge for a casual bot match, with my favourite maps being Q3DM7, Q3DM9, Q3DM13, Q3DM14, and Q3DM17 in order of first appearance. Whenever I felt the need for a fresh Linux installation, which was often before I settled on Arch Linux in 2013, Quake III Arena always became the first game I would reinstall.

This had as much to do with the game's technical achievements as my fondness for the gunplay. Throughout all of the upheavals I went through in following the developing free graphics stack, Quake III Arena became just as important to me as glxgears in demonstrating that 3D acceleration was in fact working, with the game engine's OpenGL implementation still being one of the slickest and most performant ever produced. 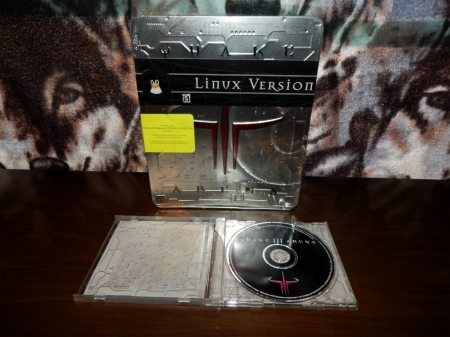 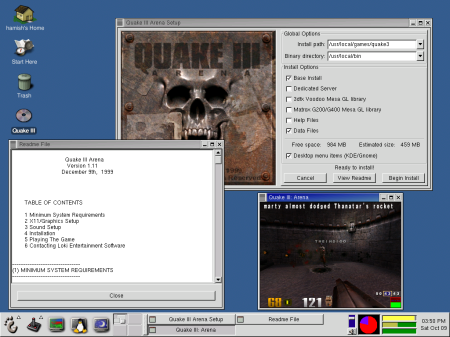 This held true for Dianoga as much as any other Linux system I have used. Linux actually outperforms Windows 98 when the timedemo is ran using Normal quality settings, scoring 36 FPS to 32 FPS on Windows 98. On the Fastest setting Linux manages 41 FPS to 35 FPS, but Linux does fall behind Windows when set to High Quality, with it getting 18 FPS to 23 FPS. In general Windows performs better at 32 bit colour depth, while Linux takes the lead at 16 bit colours.

Unlike the original Linux ports of Quake and Quake II with all their idiosyncrasies, the retail Linux release of Quake III Arena really does hold up when compared to the Windows version, and even stands tall against a lot of modern source ports. This largely has to do with the adoption of the Simple DirectMedia Layer as opposed to using SVGALib or straight X11, alongside conveniences such as the inclusion of the Loki Setup installer on the CD-ROM.

It was also the first and to date last retail Linux game that id Software would officially support themselves, with them taking over from Loki Software after the latter's closure in 2002 by hiring Timothée Besset to provide technical support; he would go on to port Return to Castle Wolfenstein, Wolfenstein: Enemy Territory, Doom 3, Quake 4, and Enemy Territory: Quake Wars to Linux in an unofficial capacity similar to Quake and Quake II.

Indeed, in order to keep the timedemo data consistent across platforms, I found that I had to patch Quake III Arena on both Windows and Linux to the final 1.32c release. This was a straightforward process using the linuxq3apoint-1.32.x86.run installer provided by Besset, which can also add support for the Team Arena expansion pack on Linux. From there I just had to override a few of the game binaries with those provided in the quake3-1.32c-linux.zip archive.

Having gone through all three of the Quake games which would be reasonable to to run on the hardware, the question became what I should choose to play next. After exhausting the bulk of id Software's output, I still had a number of games from a variety of developers to choose from. The only thing I knew for certain was, no matter what the next game would prove to be, it was not going to be yet another first person shooter.

Carrying on in Part 8: Shovelware with a Penguin

Hamish Paul Wilson is a free software developer, game critic, amateur writer, and farm labourer living in rural Alberta, Canada. He is an advocate of both DRM free Linux gaming and the free software movement alongside his other causes, and more information on him can be found at his icculus.org homepage where he lists everything he is currently involved in: http://icculus.org/~hamish
See more from me
Some you may have missed, popular articles from the last month:
17 comments
Page: 1/2»

The Penguin Computing advert turned into a wallpaper is available from here:
https://eng.hebus.com/image-80984.html

And my raw Quake III Arena timedemo data can be found here:
http://icculus.org/~hamish/dianoga/quake3-timedemos.txt

View PC info
This brings back some memories

Used to have some epic times in at lan parties with mates.
3 Likes, Who?
gbudny 11 Oct, 2021
Wow! I wasn't aware that you wrote articles about it, which is fun.

A Few weeks ago, I bought the old computer to run mohaa, and of course, I didn't check that computer had the SATA hard drive.

It was terrible! I decided to buy the next old computer, and take some things from the first one like Geforce FX 5500. However, I asked the owner if he can check that this computer could run Mepis from 2003. It's so crazy how many good memories can bring the buggy version of Medal of Honor Beta 3 for Linux.

I remember that there was this moment when I couldn't use Linux 2.4 on Debian etch, and I was forced to move to Linux higher than 2.6.8. Unfortunately, the single-player mode of mohaa for Linux doesn't work properly on the modern Linux distributions.

Quoting: pete910This brings back some memories

Used to have some epic times in at lan parties with mates.

Ah, those were the days when the UT games actually came with linux support (even if you had to download the installer afterward). That all changed with UT3, which got delayed and delayed and finally Icculus said it wasn't going to happen because of middle-ware. Sad days. So Epic HAD a history of supporting Linux, they just bailed on it, and even though other games could have been released on it, they have not been...

I've been hankering for finding Heavy Metal F.A.K.K. 2 for Linux, but haven't managed to locate it. I do have Heavy Gear 2 and some of the other Loki releases. Also have most (all?) of the LGP releases.
0 Likes

Quoting: pete910This brings back some memories

Used to have some epic times in at lan parties with mates.

Ah, those were the days when the UT games actually came with linux support (even if you had to download the installer afterward). That all changed with UT3, which got delayed and delayed and finally Icculus said it wasn't going to happen because of middle-ware. Sad days. So Epic HAD a history of supporting Linux, they just bailed on it, and even though other games could have been released on it, they have not been...

I've been hankering for finding Heavy Metal F.A.K.K. 2 for Linux, but haven't managed to locate it. I do have Heavy Gear 2 and some of the other Loki releases. Also have most (all?) of the LGP releases.

Indeed, I remember looking all over for the UT2004 linux installer only to find it on the disc

I had LGP's port of x3:reunion back in the day, Damn I put some hours into that. IIRC they had demos you could try of there various games.
0 Likes
gbudny 11 Oct, 2021
Soldier of Fortune for Linux is an awesome game, and I was so desperate that I also bought Soldier of Fortune 2 for Mac. I know it is embarrassing. However, it was a very different game than the first part, and I didn't know about it.

Cold war for Linux is still my favorite game, and I always keep it on my hard drive.

UT99 was about one of the first games I had on Linux running with Glide on a Voodoo Banshee and later on a Voodoo 3.

Quake 3 ran much better for me back then on Linux than Windows, maybe due to the miniGL implementation Windows used for 3dfx cards and the overall good support for OpenGL through Mesa. I was there when even though 3dfx had gone, support for its hardware was strong (albeit only one VSA-100 was usable on those cards), performance was rather good, as well (for the time, until the GeForce 3 brute forced its way to the top).

nVidia had a rough time back then with its detonator drivers, which could literally explode and leave you with a softlocked system (basically only the mouse cursor worked, all else was frozen, even networking), and it was like that for some years (actually, the last time I got that softlock should have been somewhere in 2010-ish with my then trusty 9800GT). Man! Those were fun times!
1 Likes, Who?
gbudny 12 Oct, 2021
In 2015, I thought that LGP will come back because Frank Earl showed up on the phoronix forum:

Anyone know how LGP’s DRMed games fare now? I have a few of those, including X3, but haven’t tried installing any recently.

The DRM itself was pretty permissive and innovative, but of course it needs a server to be running.

View PC info
Funny how LGP is dominating the conversation when it is not even mentioned in the article...

I do not actually have a wealth of LGP games on hand to try; since they never had the same retail presence that Loki did their games do not really show up on the second hand market, regardless of the DRM situation.
0 Likes
1/2»
While you're here, please consider supporting GamingOnLinux on: