The Epic Games Store comes to the game manager Lutris, giving you an even better place to deal with your game library split across many different stores. On top of that it also supports Steam for Windows as a game source, for those titles you can't get working directly through Proton.

Now this means that Lutris can help you manage Epic Games Store, GOG, Humble Store, Steam (Linux/Windows), DOSBox, Emulators and more. Even more helpful is that Lutris games can be launched from Steam, you can disable 3rd party services you don't want, there's support now for DXVK-NVAPI and DLSS and VKD3D is now an option by itself. 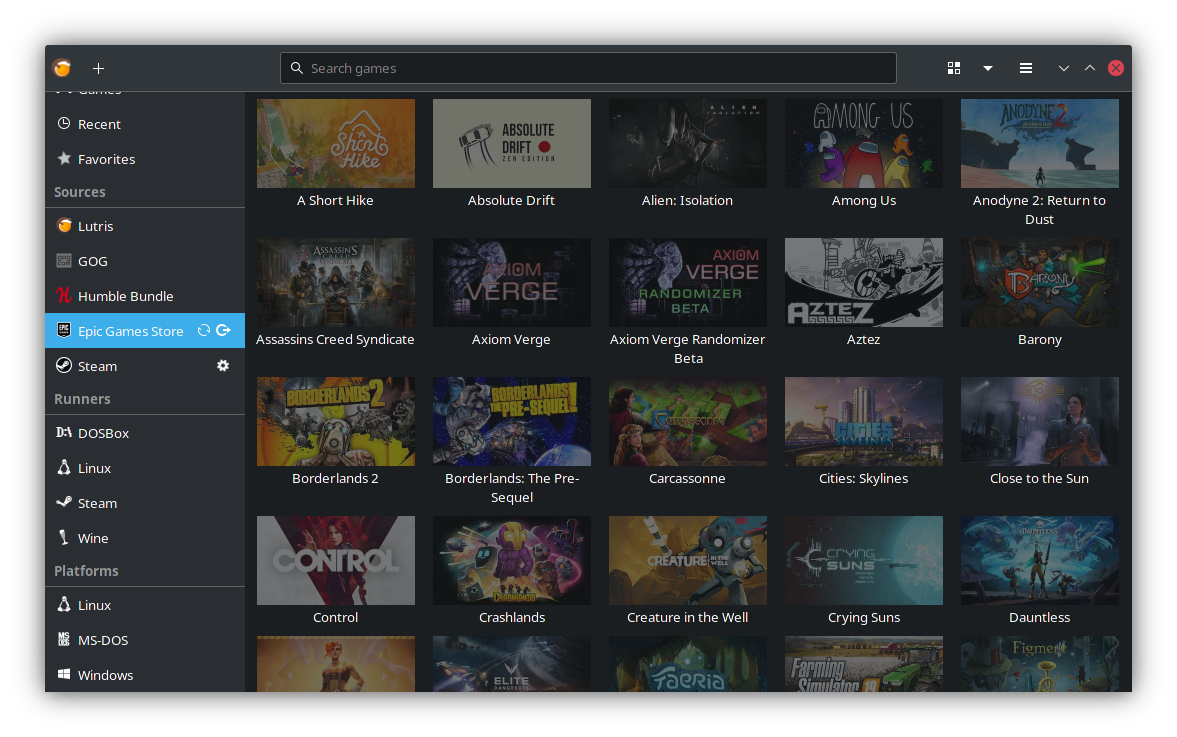 Even more came with this release like the ability to use AMD FidelityFX Super Resolution (FSR) with compatible versions of Wine, gamescope is an option, Esync was enabled by default, Dolphin was added as a game source, installers for GOG were improved, an improved monitor for your Steam games and much more.

Sounds like this is one of the biggest releases of the open source app yet.

Not having to jump between multiple launchers will be extra helpful on the Steam Deck!
1 Likes, Who?

View PC info
It’s a little disappointing to me that the method they used to implement this wasn’t a project like Legendary, but you have to download the proprietary launcher, run it through their custom patched Wine, etc. I’m not complaining as long as it works.
6 Likes, Who?

View PC info
Wait, is there now an easy "Add to Steam" option, or does one still need to go through the process of manually adding a non-Steam app from within Steam?

Quote1. Make sure you're in Steam Desktop mode (not Big Picture Mode)
2. Select Games -> Add a non-Steam game to my Library
3. Click Browse, filter by file type of All Files, and the find the executable of lutris
4. Right click on the new "lutris" shortcut and select Properties
5. Rename the title to the name of the game you would like to add. For example: SuperTux
6. Set the launch options to lutris:rungame/supertux, where supertux is the slug of the game, found in the URL of the game on the Lutris website
7. Add an icon from either Steam Banners or TheGamesDB

A pity. This can be a one-click thing.

View PC info
The only thing missing is proper Itch integration
4 Likes, Who?

View PC info
hmmm it looks like something funny is going on with the installer under Linux Mint.. I just tried to update to this version and it crashed

Quoting: Pendragonhmmm it looks like something funny is going on with the installer under Linux Mint.. I just tried to update to this version and it crashed

Note that this is only a problem if you're still on Mint 19. I'd expect that most Mint users have upgraded to Mint 20 at this point, seeing as it's been out since July 2020. Unless they can't due to the dropped 32bit release I guess.

Quoting: dxmnIt’s a little disappointing to me that the method they used to implement this wasn’t a project like Legendary, but you have to download the proprietary launcher, run it through their custom patched Wine, etc. I’m not complaining as long as it works.

Perhaps the legendary team need to reach out given lutris has been around for about ten years
1 Likes, Who?

View PC info
So can we expect to play Genshin Impact or we still have to wait for a simple click to support proton/wine ?
0 Likes

Quoting: nenoroSo can we expect to play Genshin Impact or we still have to wait for a simple click to support proton/wine ?

No. The developer will need to get their anti-cheat working with Proton.
0 Likes

I started playing with GameHub a little, and that supports pulling in your games from Steam, GOG, Humble, and itch.io. One annoyance is that it could use some better caching; it seems to always start with "no games" and then pull them all in. It's pretty quick, but when you have a large Steam library, it does take a minute.

It also looks like it's supposed to list games in the Humble Trove, but it shows as empty for me (with an active Humble Choice subscription). Of course, there's not too much interesting in there these days...