SteamOS for the Steam Deck gets slimmed down to 10GB

One thing that is a little concerning is how much storage the bottom edition of the Valve Steam Deck will have without plugging in a microSD card, seems we now have a better idea. Thanks to a developer posting on the MetaCouncil forum, there were shots shared from behind the scenes where Valve has been posting changelogs for those with Steam Deck devkits.

Considering the low-end Steam Deck is only 64GB, it's not exactly a lot of room, although we know games will load quickly from an expansion card it's still useful to know what you've got to work with. The post shows that Valve has put SteamOS on quite the diet sitting now at 10GB. 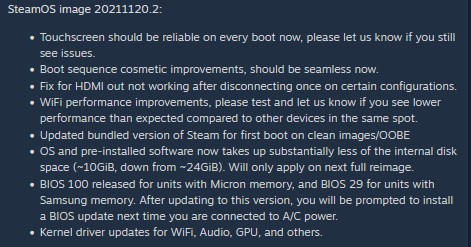 10GB still sounds pretty big, although that does mean the low-end Steam Deck should have around 50GB. Not much of course, especially considering the colossal size of some newer games but sure is better than the original 24GB. When you think that Windows 10 needs a minimum 20GB and Windows 11 needs 64GB - it's yet another reasons for people to stick with SteamOS out of the box.

Not only that, it appears that some Steam Deck hardware has a different brand of memory between Micron and Samsung, which might just be the difference between the original devkit hardware and the newer Design Validation units.

I am the owner of GamingOnLinux. After discovering Linux back in the days of Mandrake in 2003, I constantly came back to check on the progress of Linux until Ubuntu appeared on the scene and it helped me to really love it. You can reach me easily by emailing GamingOnLinux directly.
See more from me
Some you may have missed, popular articles from the last month:
39 comments
Page: «4/4

Quoting: HoolyI think so too, they are probably using an A/B-model, which means that you have two installations of the OS at every time
[...]
Or they use btrfs-subvolumes and allocate storage dynamically.

Not exactly, they run on ostree, like Fedora Silverblue. It's a bit like a git repo, or guix/nix. It has deduplication, rollback, versioning, atomic updates. That's really promising tech, I'd have picked the same.

Let's try to come up with a basic estimate

Total: 4.2 GiB. I'm falling short, but there could be more pre-installed software like Discord, plus probably a boot partition (might be a btrfs subvolume, not sure which FS they use), and possibly a "system restore" partition that might double the size, although I would personally make that a webinstall at about 150MiB.

Where did you get a base install size of 100MiB? Granted, I am on Ubuntu but

That's Ubuntu, but I seriously doubt that Arch can do with a mere fraction of these binary sizes.

They know device, so they can use more aggressive approach for steam deck images.
Can be mesa compiled only with limited GPUs support? Lot of code is common, but they know GPU which they want support, so they don't need support for older architectures then RDNA 2.
Other point is, do they need LLVM, or they just can use ACO for everything which is needed to do on device?
1 Likes, Who?

Quoting: TermyDoes anyone know what the hell they are including to make it that big? Even with several proton-versions preinstalled it shouldn't get up to 10GB, let alone 24.
Or are they maybe going in the silverblue-direction and include a bunch of redundant libraries?

It's a regular Linux distro that can function like a regular desktop OS, so expect there to be drivers for all sorts of peripherals, entire library sets for GTK and Qt, the entire KDE desktop, as well as other OS tools like editors, store clients, media players, etc.
1 Likes, Who?

I have a drive with a freshly installed Windows 10, and by freshly I mean rally freshly installed with absolutely nothing added (I know this because I simply couldn't get Wifi or Ethernet to work so wasn't able to install anything, not even the drivers). It's currently sitting at 48.1 GB used! So, Windows 11 taking 64GB wouldn't be too far off from Windows 10. I'm not sure what the article means by saying Windows 10 needs a "minimum of 20GB"; maybe there are ways to minimize the installation to bring it down from ~48 to 20?
2 Likes, Who?

I have a drive with a freshly installed Windows 10, and by freshly I mean rally freshly installed with absolutely nothing added (I know this because I simply couldn't get Wifi or Ethernet to work so wasn't able to install anything, not even the drivers). It's currently sitting at 48.1 GB used! So, Windows 11 taking 64GB wouldn't be too far off from Windows 10. I'm not sure what the article means by saying Windows 10 needs a "minimum of 20GB"; maybe there are ways to minimize the installation to bring it down from ~48 to 20?

Or the 20GB was the initial size upon release of Win10 and it's this big because of updates?
Windows is weird in that regard.
0 Likes

dvd 21 Dec, 2021
View PC info
Oh god the windows vm i'm forced to install will take almost half of my hard drive space soon. It's funny how windows is roughly the same size as my full kde installation yet it has no useful programs installed by default.

Quoting: Solitarythe question is what/why was it 24GB big before and how they managed to save 14GB.

A bit late to the party, but obviously it's because they removed emacs (:
3 Likes, Who?

Quoting: LinasWhile 20G minimum for an installed Windows 10 system may be somewhat true-ish, in practical terms is complete nonsense. I had updates fail on Windows 10 because I only had 40G of free space. The thing needed at least 60G to successfully complete!

I am sure there will be people who will figure out how to cram Windows into Steam Deck, but that's not going to be standard practice, that I am sure of.

Haha, I had bought some dual-boot tablet with windows and Android on it. Sure enough, you cannot update Windows without more storage.
0 Likes

Quoting: Solitarythe question is what/why was it 24GB big before and how they managed to save 14GB.

A bit late to the party, but obviously it's because they removed emacs (:

How dare they remove emacs! How are we supposed to edit files?

Ha, you now that think about it.. being good at emacs vs vi.. is kind of like the equivalent of one using sorcery for magic vs divinity based magic. They can get the same results, but people will look at you like you are mad if you try to suggest the other one..
3 Likes, Who?
« 1«4/4
While you're here, please consider supporting GamingOnLinux on: