A whole bunch of games just got Steam Deck Verified

Seems Valve has now properly started verifying games ahead of the Steam Deck launch, with a bunch of titles now verified ready to play so let's take a look. The list can be seen on SteamDB.

The list is expanding, and we expect obviously a great many more to be noted as verified before the Steam Deck begins launching by the end of February.

It's a mixture of native Linux games and Windows builds relying on Steam Play Proton. Not being on the list doesn't mean they won't run, as Valve does have very specific criteria that games need to hit to be officially verified. It might be a case of text being too small on the screen stopping them, which no doubt mods will come out to help with that on some games that no longer see developer support.

There's a few games that are already placed into the "Playable" category like War Thunder which has too small text and the launcher being a nuisance, RimWorld needing a manual invoking of the on-screen keyboard for some text input, The Witcher 3: Wild Hunt having too small text and so on.

Want to check out the newer Steam store Tablet Mode? It will actually show the Deck Verified symbols and on store pages there's a whole new Steam Deck compatibility section that you can bring up like so: 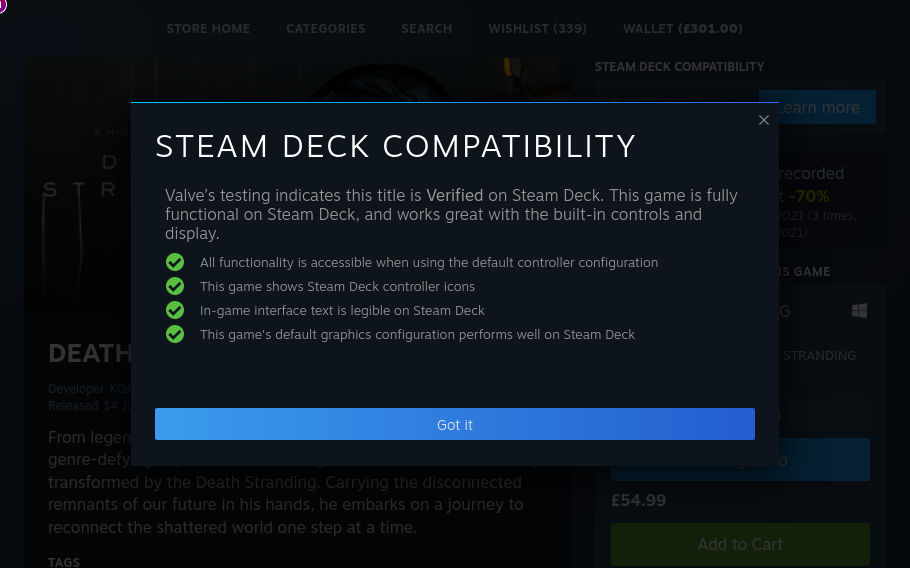 To do so it's easy enough in Firefox. Simply open a tab with the Steam store and hit CTRL+SHIFT+M. From there you need to add a new device by selecting the dropdown list that will usually say "Responsive" by default. From there hit "Edit list" and set a name of "Steam Deck" (or anything really), set user agent string to "Valve Steam Gamepad" and a resolution of "910 x 568". Then select it after saving, and refresh and you will get the Tablet Mode.

In other news, Valve developer Pierre-Loup Griffais confirmed on Twitter that shipping fees are included in Steam Deck purchases which will hopefully settle a few minds about it.

We do often include affiliate links to earn us some pennies. We are currently affiliated with GOG and Humble Store. See more here.
About the author - Liam Dawe
I am the owner of GamingOnLinux. After discovering Linux back in the days of Mandrake in 2003, I constantly came back to check on the progress of Linux until Ubuntu appeared on the scene and it helped me to really love it. You can reach me easily by emailing GamingOnLinux directly.
See more from me
Some you may have missed, popular articles from the last month:
43 comments
Page: «3/5»

Here:
https://steamdb.info/app/234140/info/
at the bottom of the table there is a "Steam Deck Compatibility" row with this info:

and a link pointing to the page:
https://steamdb.info/patchnotes/1398848/
containing other links.
This may point to what version was verified but I do not know how to track the parent repository/branch/build, can someone help?

That just points to the build of the public branch, but doesn't specify whether it is the Linux or Windows version.
0 Likes

Quoting: rustybroomhandleAw Witcher 3, so close. You can do it buddy! Kidding, it's nice that Valve are applying some standards. 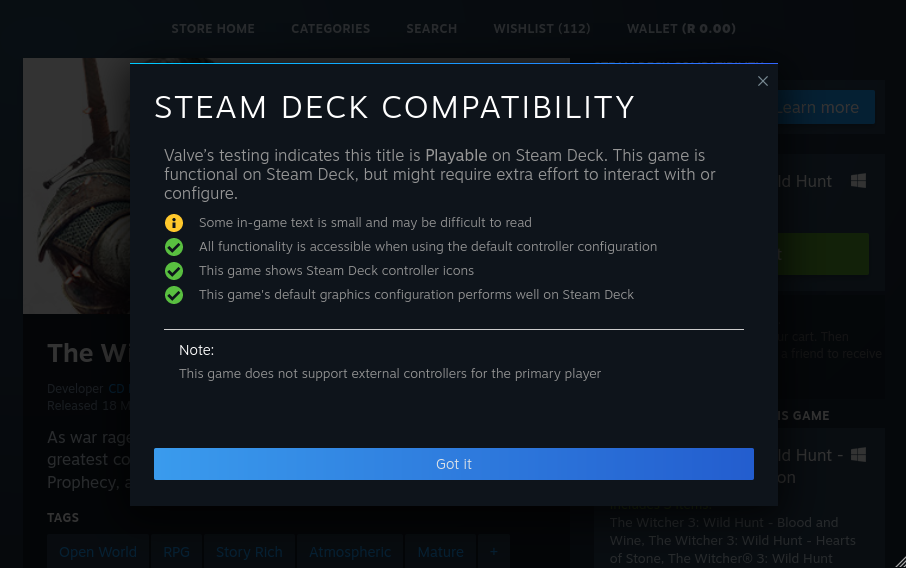 Total War: Warhammer II getting verified is amazing for a device with such a small screen, no mouse, and a total (heh) CPU hog.

Games really should support bigger font sizes anyway, even for desktop or TV use, purely from an accessibility standpoint.

Quoting: XpanderUI scaling should be standard for all games imo. So people can adjust accordingly for their screens and needs.

Well, it's never that simple and most devs never really expected such small screen and obviously didn't even have one to test for it. But once Steam Deck gets around lot of these playable games will bump up once they fix it, when the devs sees that is the only issue thats stopping him from getting that green rating.

I have been checking few games from that list, Dishonored does not appear to be rated yet. Not sure why it is on the list.

Never expected for such small screens, but its not a new issue. Its been an issue for ages. Playing games from your Couch from TV vs playing from your monitor which is much closer to you and all the different screen sizes and resolutions. UI Scale is a must. Some games ofc have nice scaling options. Most older MMORPGs have which is nice etc but so many triple A's are missing that feature.
1 Likes, Who?

einherjar 20 Jan
Most important will be, that the devs are committed to the Deck and do testing before updates are released.

I doubt that this can all be handled by Valve, once there are a few hundred titles.
2 Likes, Who?

Frawo 20 Jan
View PC info
I wonder why Ghostrunner and Hades are not in the verified list, as Valve has already shown them as verified here.

Edit: Both games are on the verified list now.

Quoting: rustybroomhandleAw Witcher 3, so close. You can do it buddy! Kidding, it's nice that Valve are applying some standards.

I think it's a great way to motivate the devs to push a small update and get that green tick. We'll see how effective it is, though.
1 Likes, Who?
someg33zer 20 Jan

Quoteon store pages there's a whole new Steam Deck compatibility section that you can bring up like so:

How? You've shown what the browser looks like once you've brought it up, not how to bring it up! How do you see the Steam Deck compatibility section?
0 Likes

View PC info
Interesting to see Circuit Superstars in that list. I've got my eyes on that, but ProtonDB shows mixed results, so I did not dare buy it so far. Guess I can reconsider during the next sale :-).
1 Likes, Who?

Quoteon store pages there's a whole new Steam Deck compatibility section that you can bring up like so:

How? You've shown what the browser looks like once you've brought it up, not how to bring it up! How do you see the Steam Deck compatibility section?

Did you read the rest of the article below the image?

View PC info
Obviously it doesn't ultimately matter what games Valve chooses to mark verified first, but it's an interesting mix, not entirely consisting of popular AAA games. Really happy to see Noita on there, and Webbed is an interesting choice seeing as it's a relatively small game that only released last year. (It's a fantastic game, don't get me wrong, just interesting to see it in this first batch.)
1 Likes, Who?
« 1«3/5»
While you're here, please consider supporting GamingOnLinux on: