It seems there continues to be no stopping Steam's growth, with it only just recently hitting a brand new all-time high for concurrent users online.

The new high recorded by SteamDB on January 2 was 27,942,036 so it's getting real close to hitting another massive milestone. A number we expect to be beaten again later this year, especially with the Steam Deck beginning to roll out during February and continuing throughout the year. When the new high was hit, Steam saw 8,219,950 gamers actually playing something. 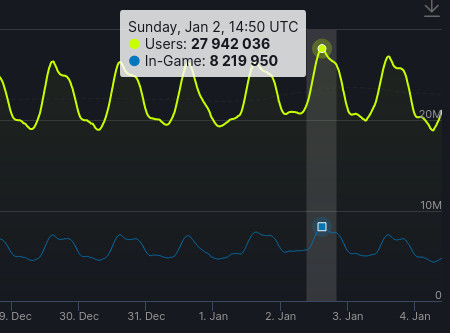 The top most played games on Steam doesn't really change much and certainly wasn't different during this time, with the usual suspects there including:

View PC info
So that'd mean (roughly) we were over 200k penguins online at the same time ? 😳

Quoting: a0kamiSo that'd mean (roughly) we were over 200k penguins online at the same time ? 😳


I'd make it nearly 300k.
2 Likes, Who?
While you're here, please consider supporting GamingOnLinux on: