As if I could get any more excited? Selaco just looks simply incredible in the footage we've seen previously, this new GZDoom-powered FPS is going to kick-ass.

One of the big features is the FEAR-inspired AI system, where the enemies actually work together properly to take you down. They're aware of each other, use different tactics depending on the situation and so on. It does sound exciting and the latest video shows it off a little more. Oh, you also get to flip things for cover which is clearly awesome. 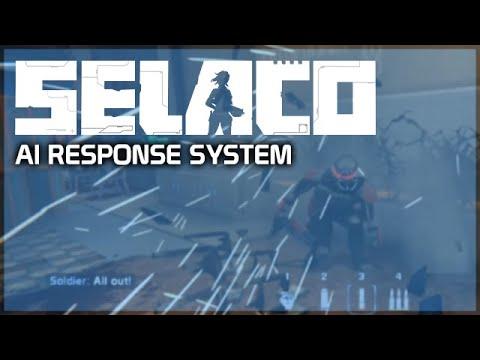 Selaco is a story-driven experience, and we don't say that lightly. A dedicated writer has been brought on board to assist with creating an engaging and believable sci-fi story and world.

Turn the entire world into confetti with the destructive power of your weapons. Every single bullet will react properly with any materials or objects you hit. Our artists have created many different variations for each (voxel)object to ensure that the aftermath of each encounter is palpable. That once lavish office space now nothing but a pile of rubble with broken paintings, smashed tables, screen, chairs, smoke, and chunks of debris.

With our FEAR influence, writing proper AI was a goal from the get go. The enemy is fully aware of each other's presence and work together to take you down. They will keep their distance if you apply constant pressure on them, will rush you if you hide or run out of bullets, toss grenades if you use the same cover for too long, and much more. Hundreds of custom lines have been written and acted out, providing hints to the player about their current plans and tactics.

Selaco is accompanied by a full length original soundtrack composed by an experienced musician who has worked on many games in the past.

To help immerse players in the story and atmosphere of Selaco, professional voice actors have been brought on board. Dawn will be voiced by the incredibly talented Melissa Medina, with other casting choices revealed at a later date.

It's quite some time away from release yet but don't let that stop you heading over to Steam and hitting that wishlist button.

You can also support the developer on Patreon.

View PC info
I was hesitant to wishlist this because the release if estimated to be over 200 years away and I might not make that. But it's looking so damn good!
6 Likes, Who?

View PC info
In 2255 we'll still be waiting for Half-Life 3, but at least we'll have Selaco.

View PC info
I'm generally not huge on shooters but this just keeps looking better and better. I've had it wishlisted from a while back and I want to hit the button harder with every update. Can't wait for release, even if I do have to figure out the whole immortality bit to enjoy it.
1 Likes, Who?

View PC info
Does anyone remember the AI in the F.E.A.R. game? Was one of the best ever: this gave me the same vibes.
3 Likes, Who?

View PC info
it's insane how good this looks
1 Likes, Who?