Two goodies for fans of the open source Heroic Games Launcher today. Those sticking with the stable release get some fixes, and those who want some fun can try out a huge new Beta.

For the v2.3.9 stable release the developers added in some fixes for GOG games that use DOSBox and ScummVM, further increasing the compatibility as Heroic will properly handle the configuration files for them now. Always great to see!

Heroic v2.4.0 Beta is where the fun begins. This is a huge change to how the app looks and works. The biggest changes include a new collapsible sidebar that stays open so you get access to many quick-functions like accessing your library, store pages, settings, the wine manager, download list and download status and more. It's actually really useful and makes Heroic feel a lot better. 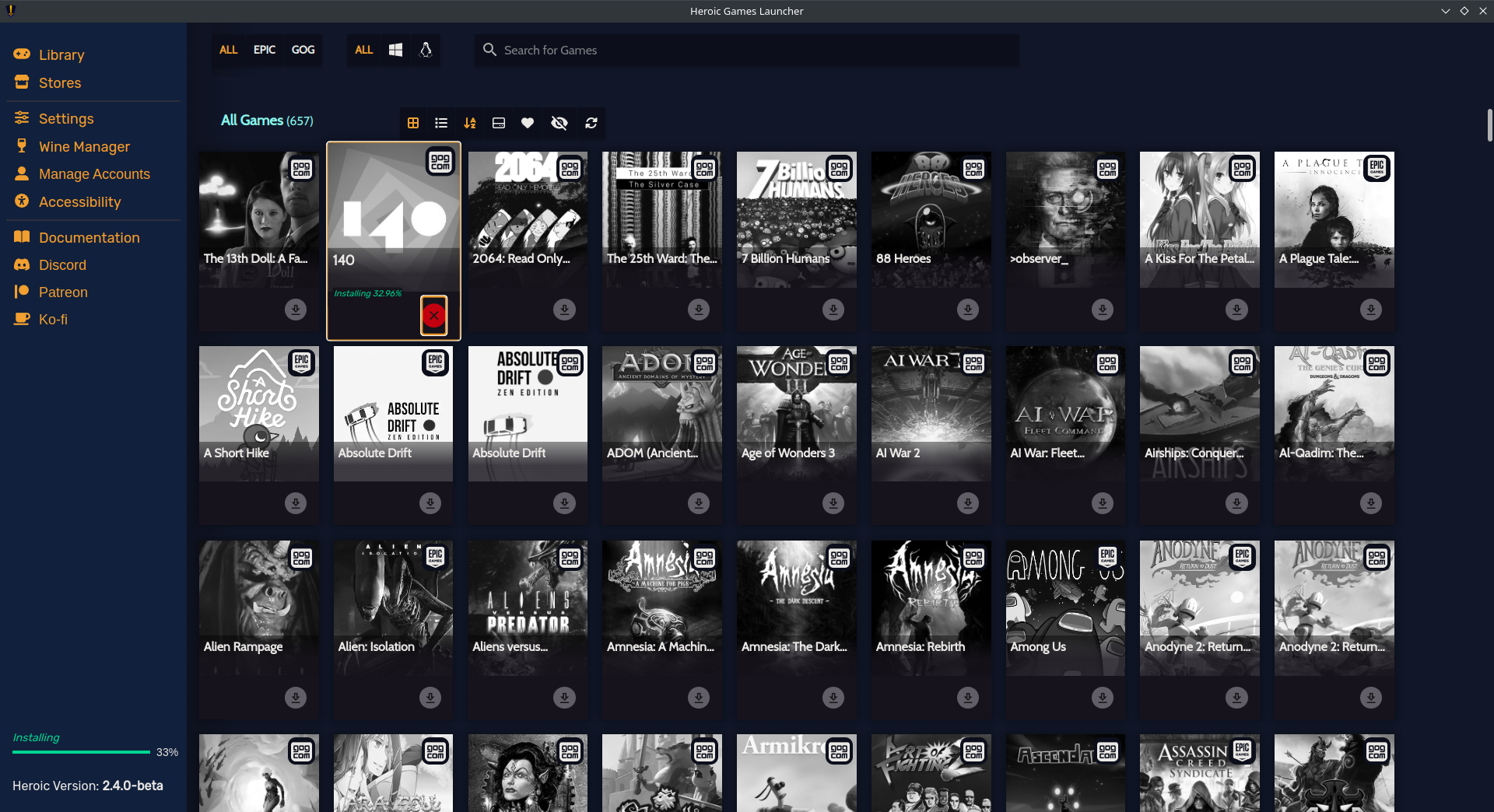 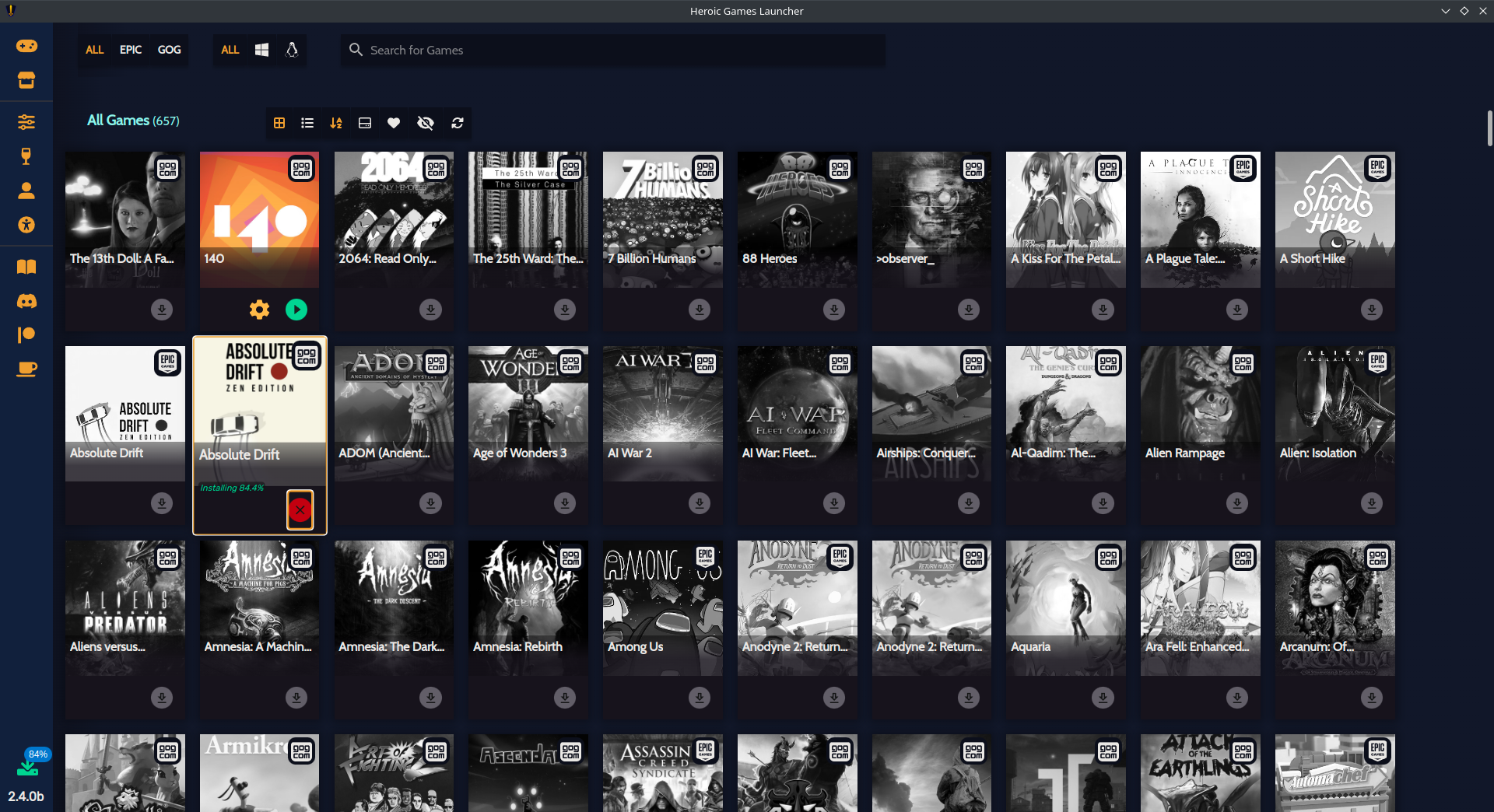 You will also notice that the library is now unified into one list, although you can filter it per-store. Game cards will also now always show the game title and buttons for play, settings and updating.

Plenty of other changes like an option to change the game language if supported, a fix for GOG games using DOSBox and ScummVM (just like the stable release) and much more.

You can still swap it to a list if you prefer it: 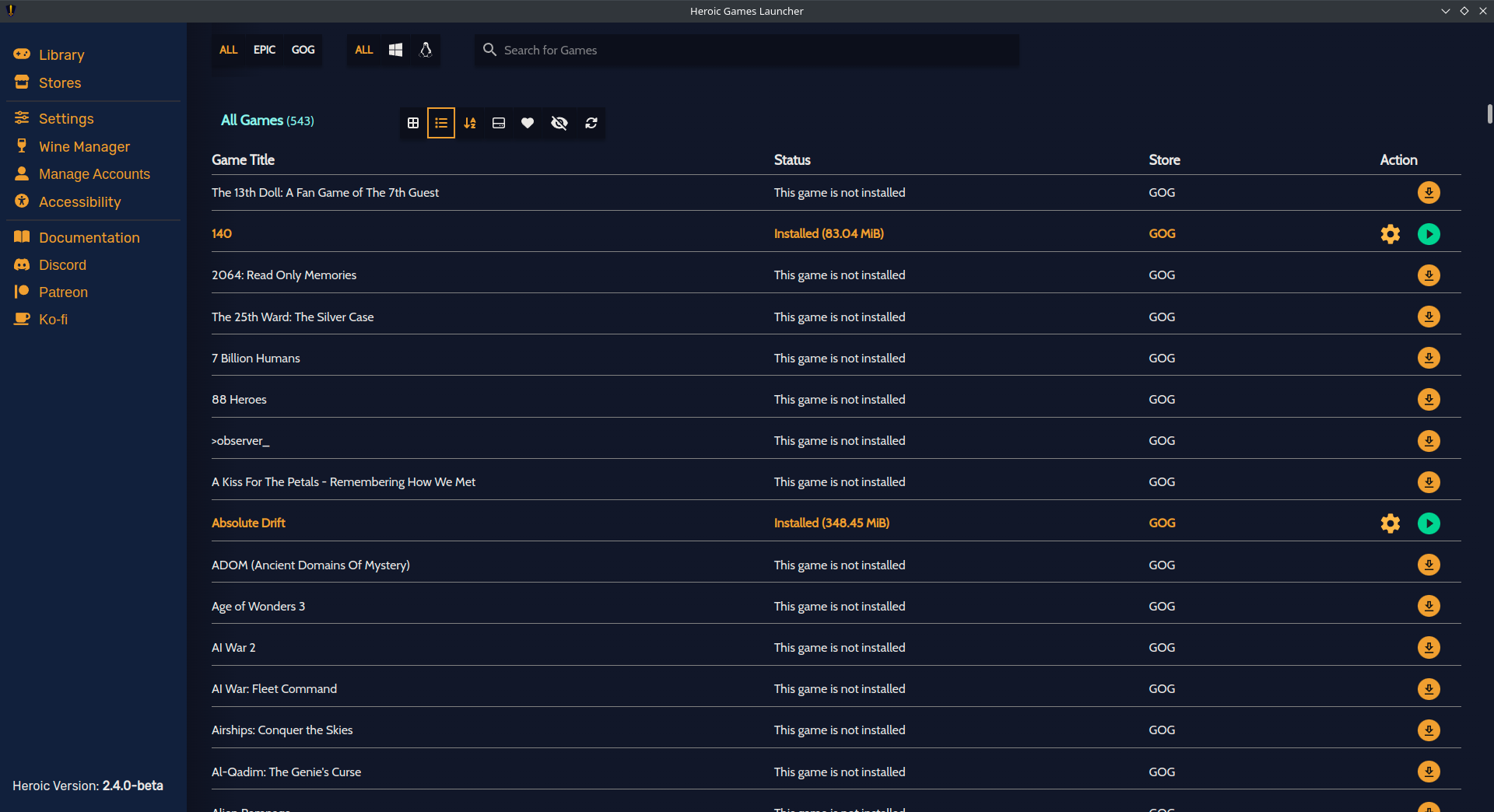 What do you think to the changes?

I think Ubi or Origin would make more sense as they cooperate with Epic already.
1 Likes, Who?

I think Ubi or Origin would make more sense as they cooperate with Epic already.

He probably suggested it because there's a working open-source client (nile) compatible with Amazon Games Store already, so Heroic just needs to add support for it.
2 Likes, Who?

I think Ubi or Origin would make more sense as they cooperate with Epic already.

He probably suggested it because there's a working open-source client (nile) compatible with Amazon Games Store already, so Heroic just needs to add support for it.

Exactly. Plus, AGS doesn't have any GUI support yet.
2 Likes, Who?

Phlebiac 16 Jun
View PC info
It just keeps getting better! I was trying to figure out if I had any overlap in my libraries (i.e. the same game in both EGS and GOG), but was confounded by the counts: All Games (572), Epic Games (293), GOG (278). Somehow the total is more than the sum of the individual counts?

Crazy that EGS has given away so many games - I have never given them any money. Anyway, I was curious if, in the case of overlap, a game would be listed with dual store badges, or would get an entry for each store.
0 Likes

I assume nile is this one:
https://github.com/imLinguin/nile

Which means that "Amazon Games Store" is this:
https://gaming.amazon.com/intro

I guess "Prime Gaming" is what became of the Twitch store when Amazon bought them. I did claim some of the free "Twitch Prime" games back before I canceled my Amazon Prime account, but never tried to use the required client to download them; I'm guessing you need to have an active membership to get anything you claimed previously.
1 Likes, Who?

Quoting: PhlebiacCrazy that EGS has given away so many games - I have never given them any money. Anyway, I was curious if, in the case of overlap, a game would be listed with dual store badges, or would get an entry for each store.

It gets an entry for each store - makes sense, I guess, since you may want different settings for some reason.

Btw, anyone also having the bug that the wine version selection does not show entrys in the general and game specific settings ind the last 3 or so versions, or is there something wrong on my end?
1 Likes, Who?

View PC info
I don't like the fact that the install buttons are all shown and highlighted at once, for every game tile. They should be IMO highlighted only when you hover on them. It feels very aggressive on the eyes and and sort of disruptive when you browse the library.
Always showing the name of the game is a good move, but the rest of the buttons should remain hidden unless hover on them. 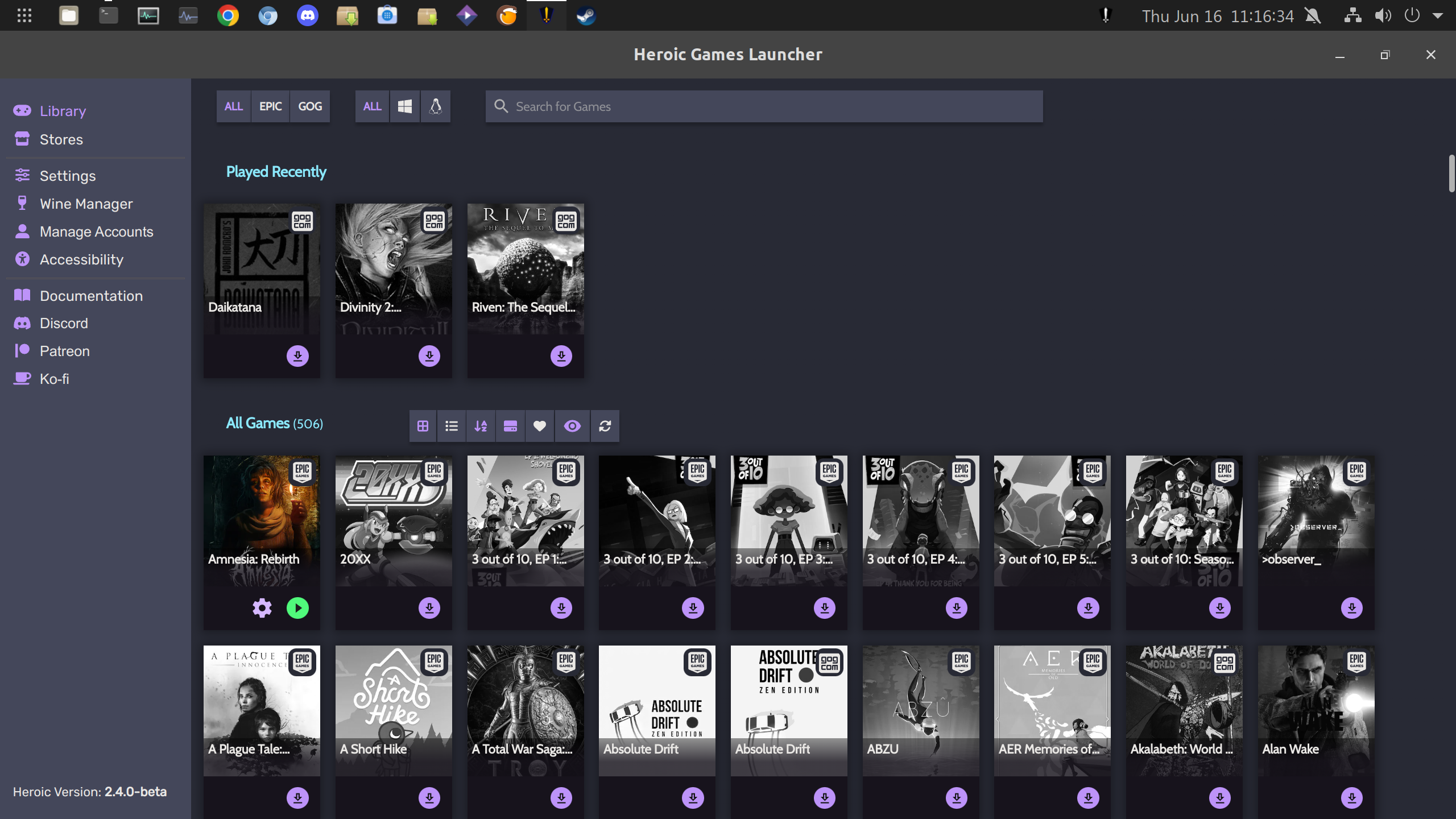 tpau 16 Jun
View PC info
it is a design beta to collect feedback ;)

I agree it is a bit aggressive in the current iteration.
If i just scroll through the list i prefer to see the cover art in full.
You don't necessarily have to show the full text with the games name. It is often part of the artwork too.
If you need the text, put it at the bottom at least.

QuoteHeroic v2.4.0 Beta is where the fun begins. 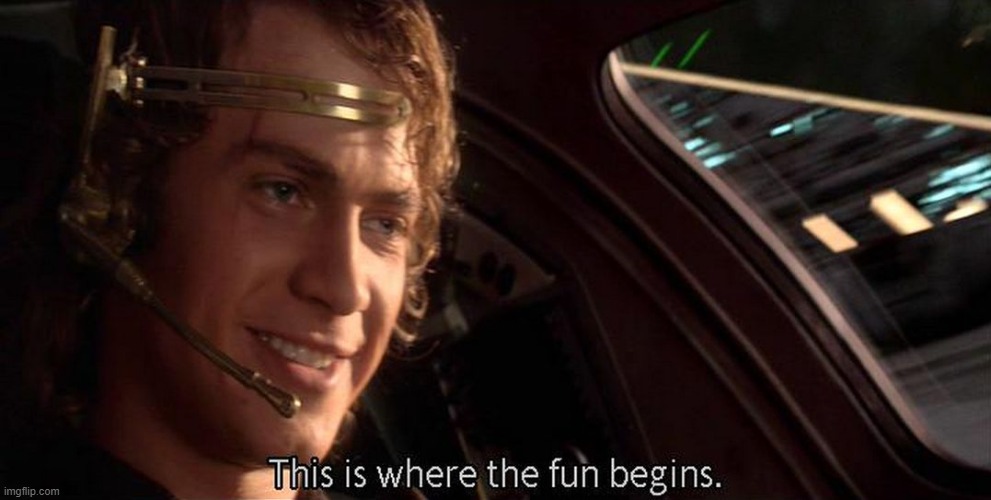 I just had to do it