Fight against socks and sandals, grey suits and more in Fashion Police Squad

What do people have against socks and sandals exactly? Fashion Police Squad is a funny new first-person shooter from Mopeful Games and No More Robots and might be one of my favourite games this year. Note: key provided by the publisher.

Runs perfectly on Steam Deck and desktop Linux with Proton 7 out of the box.

Some first-person shooters have you fight against demons, or just various types of people with guns. Fashion Police Squad is different. Instead, you're cleaning up the streets full of dull people in suits or people committing fashion crimes that just look too cool.

This is a comedy shooter that does not take itself - or anything - seriously. You can quite literally slap fashion sense into people with a glowing glove. It's absolutely hilarious and one of the few games to make me properly chuckle out loud to myself while playing it. 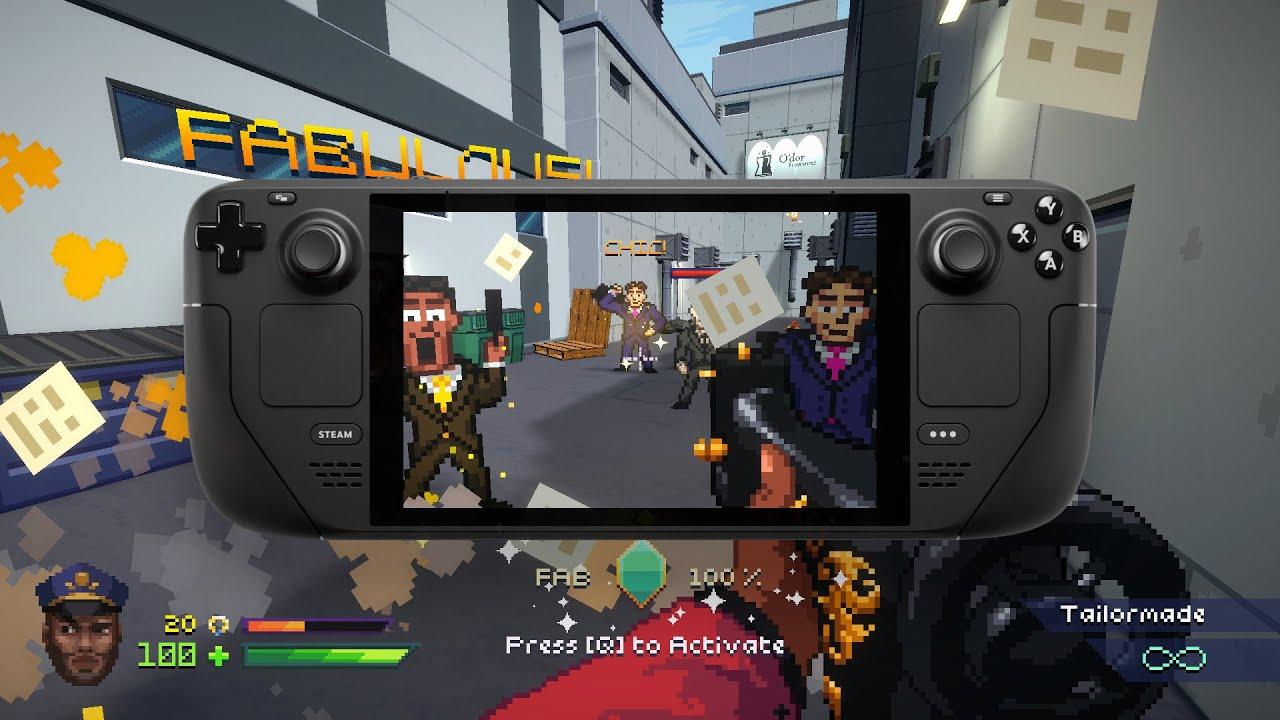 While it is a shooter and you are firing weapons at people, it's also not violent because your guns don't exactly fire bullets. You're giving people what they need — a fancy new look, or sorting out whatever fashion crimes come your way. Different types of enemies require a different approach and it's just brilliant. Find someone in a suit that doesn't fit? Pull out a different gun to blast their clothes full of pins and needles and sort them out. You also get to whip things with a belt too and it's hilarious.

The weapons themselves don't have a lot of feedback like other shooters but that's not the point. Here the feedback is you solving the fashion crisis unfolding in front of you, and the hearing glorious silly voice lines and seeing the magical transformations after you fix people up.

This is a serious surprise hit, and now happily one of my favourite experiences of 2022. Don't miss out on it.

View PC info
As an aussies whos idea of "good clothes" are Tracky Dacks and Flannels without holes in them........ This game scares me......
2 Likes, Who?

What about thongs?
2 Likes, Who?

View PC info
This looks hilarious! I hope it has Gopniks in Adidas track suits!
0 Likes

[email protected] 9 Sep
View PC info
Is this kind of thing that I miss in big studio (AAA) games. Things are so generic that is difficult to be surprised by a new game from big companies. And when you find a game from them that resemble anything innovative, you can feel the wasted potential, because it is obvious that the creators original vision was castrated to "appeal to a bigger audience".
3 Likes, Who?

View PC info
My grandpa wore socks with sandals. If I ever do, it will be to honor his legacy. Fashion police be darned. ;)
3 Likes, Who?

View PC info
Was that an admission to wearing sandals and socks?
2 Likes, Who?

I always wear steel toed work boots....... Need some protection from all the deadly animals here.......
2 Likes, Who?

I always wear steel toed work boots....... Need some protection from all the deadly animals here.......

I've only just learned the other day that you Aussies call flip-flops like that unironically and took the opportunity.
2 Likes, Who?
Purple Library Guy 9 Sep
Whether the actual game is fun or not, it's certainly prompting some amusing comments.
2 Likes, Who?
1/2»
While you're here, please consider supporting GamingOnLinux on: