Well here's a game I didn't expect to like or actually be any good. It's Disney Dreamlight Valley from Gameloft, a game that's a mixture of Harvest Moon and Stardew Valley but for Disney fans.

Gameloft aren’t a particularly well-liked developer, especially on Steam where their previous releases were free to play with lots of micro-transactions. At least in this case though, they seem to be doing much better than usual. It's also currently a paid game but once it leaves Early Access it will be free to play.

So far it runs well on Steam Deck and Linux with Proton Experimental, although I found that the default Proton 7 now and then decided to crash, like during / after cut-scenes which has been smooth sailing with Experimental. I've been playing it with the screen locked to 45Hz from the performance menu with Graphics set to Medium, Shadows on Low and Distance Quality on Low which has given a mostly smooth experience. With that, you get between 2-3 hours, and when performance does dip down because we’re locking the screen to 45 you won’t feel it so much or even notice many of the smaller dips like you would if you were sat on 60Hz.

Here's some gameplay on Steam Deck and me talking about it: 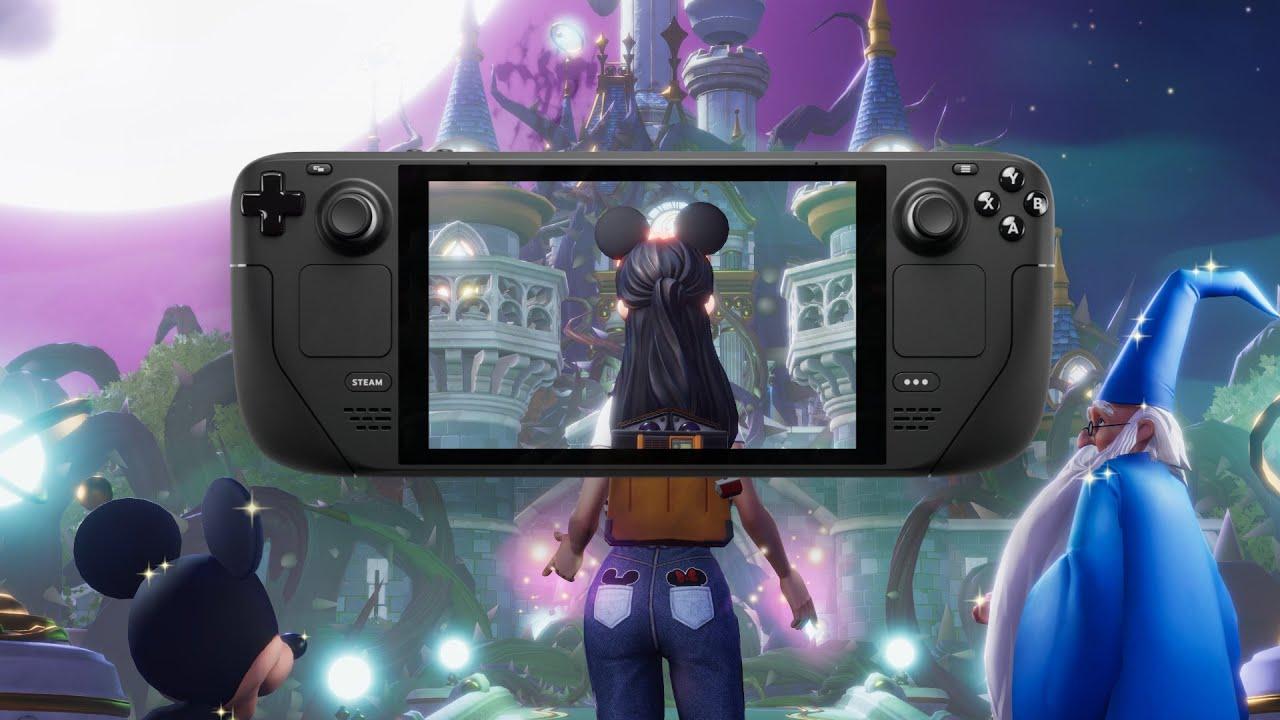 On my Fedora Linux desktop, it has also been running very nicely on Ultra details which is not unexpected considering I'm running an NVIDIA 2080 Ti and an AMD Ryzen 5800x. Nice to see it running well across the board though!

A game I didn't expect to like but I definitely do. Originally a game I planned to have with music in the background, or some YouTube videos playing but honestly, it's started sucking away my actual proper attention because I want to keep going in and doing more quests. The game quite nicely mixes together a little adventuring, questing, exploration and tending to your little garden.

Gameloft mentioned that the full version will have a completed main storyline but they're not announcing a whole lot about it yet other than it having "memorable characters from Mickey & Friends, Disney’s The Lion King, The Little Mermaid, and Moana, Disney and Pixar’s Toy Story, WALL•E, and more". There's already plenty of Disney characters to meet too so Disney fans can have plenty of fun and you can even take a snap of your character with them and share it across social networks.

QuoteIt's also currently a paid game but once it leaves Early Access it will be free to play.

Huh, that's an unusual model. I guess it's the on the principle of "make sure you get only the really dedicated people to help beta test in Early Access".
1 Likes, Who?

QuoteIt's also currently a paid game but once it leaves Early Access it will be free to play.

Huh, that's an unusual model. I guess it's the on the principle of "make sure you get only the really dedicated people to help beta test in Early Access".

It's a good way to sell "founder's passes" and "ultimate editions" and build hype/get good reviews before full release. Then the microtransactions will get applied in earnest, once the sunk cost really sets in.

They've laid the groundwork for it, with their in-game currency, although I'm surprised it's only one so far. Maybe they'll add "dream gems" or something later. If you see something like that, you'll know what's up.
2 Likes, Who?
Jackson 13 Sep
Been playing it since release on Arch, and it works so damn well. Smooth as it gets, really happy with this game. I wasn't sure about paying Gameloft (with their history), but they actually killed it on this one, I have faith that Disney won't let their IP go down with microtransactions.
2 Likes, Who?
TheRiddick 13 Sep

View PC info
Meh, not enough blood and guts for my liking. Not even blood and bone, how these plants meant to grow up strong to fight off the hordes of mutant plants? I just don't get it.
1 Likes, Who?

Quoting: JacksonI have faith that Disney won't let their IP go down with microtransactions.

That's a bet I won't take. Disney is in the business to make as much money as possible, and the "pay to win" market has proven to be highly profitable.
1 Likes, Who?

Quoting: JacksonI have faith that Disney won't let their IP go down with microtransactions.

That's a bet I won't take. Disney is in the business to make as much money as possible, and the "pay to win" market has proven to be highly profitable.

I've heard people say "but they're only going to sell cosmetics" and I'm like my dude, the game is cosmetics. That's the whole point.

But there's no way they'll leave it at that once it's in full release and they've got a fat stack of reviews saying there aren't bad mtx.
0 Likes
randyl 14 Sep

View PC info
I really like this game. Didn't think I would but it's a very casual building decorating sim with cooking, fishing, and resource harvesting. The main thing to do is build reputation with Disney NPCs, run their quests, and decorate the zones and houses. It has a lot of the same play loops that Animal Crossing or Stardew Valley has, but a bit more casual.

The basic version comes with PC GamePass so that's how I got to try it out. I'll probably buy a nicer package a little later one when I'm sure I'll keep playing it. The game is heavily built on cosmetics, but in addition to the outfits you can unlock you can also design clothing based on motifs you unlock through game play. Game Loft has said they will keep their microtransactions to cosmetics which is fine I suppose. There are a lot of progression perks they could sell too which I hope they do not, but since it's largely single player (with a future multiplayer aspect in the works) I guess it doesn't matter.

The founders packs come with some exclusive cosmetic swag and then a ton of what will be their game cash. There is an event system styled on the battle pass concept. No rewards in this event are locked behind a premium status.
0 Likes
While you're here, please consider supporting GamingOnLinux on: