Here's an update I missed recently somehow. Bottles, the application you can use for managing various Windows games and apps installed with Wine had a fresh update with a fancy new Library Mode. Where do these developers find the time to constantly improve Bottles? Amazing.

This new Library Mode was previously an experimental feature that's been promoted to stable for everyone. What is it? In short: it allows you to view all the games and apps installed across different Bottles (Bottles is the name of the app, and the name of the spaces you install things into).

Here's how it looks: 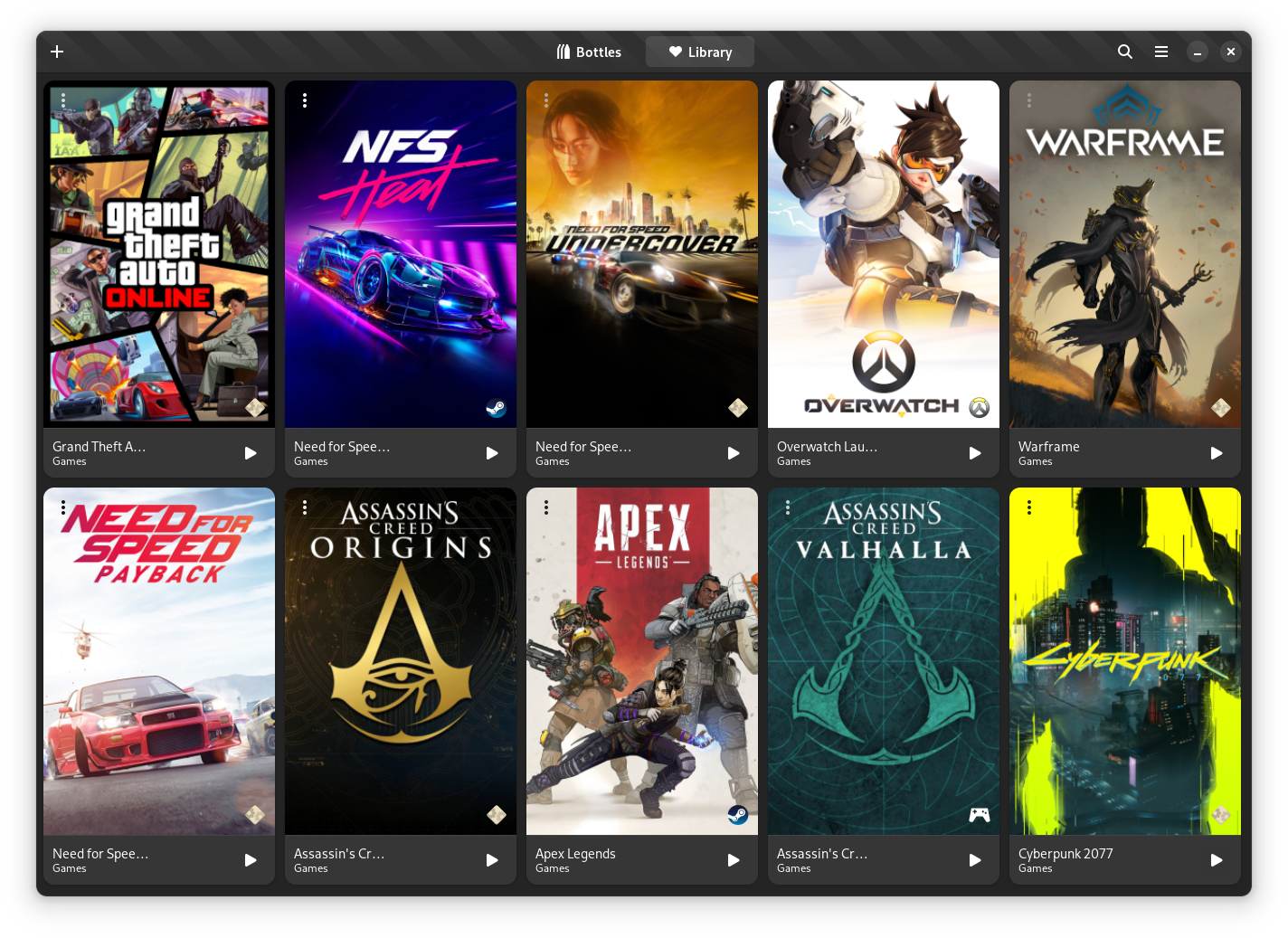 So no more swapping between various Bottles to find where everything is, as it's all available in one fancy place. Nice.

The 2022.8.28 also solves numerous bugs, moves around some legacy options and upgrades a couple of the Wine versions used they call "Runners" like Soda, Caffe and Vaniglia with plenty of improvements based on newer versions of Vanilla Wine and Valve Proton.

View PC info
I'll try to use it again for Playstation Plus. At the moment I'm using Lutris for it.
0 Likes

View PC info
Should I use it for games instead of lutris?
0 Likes

Depends on your usecase.
Bottles is simpler to use and provides sandboxing for the wine prefixes, in Lutris you can dive deeper into the settings and more easily adjust every aspect.
4 Likes, Who?

I personally use Lutris because that's what I've been using before Bottles was a thing, and I like setting up my Wine prefixes from scratch and adjust all the dials and knobs manually. On the other hand, Bottles makes managing your, well, bottles easier. It also looks more all-encompassing, focusing on simplifying the installation and running of both games and applications.

There's also Lutris Wine and Bottles Wine; I think the Bottles devs call it Caffe? I don't know what patches they have in it, but might be worth looking into and deciding if that's the Wine you want to use.

So at the end of the day I suppose it boils down to which of the two UIs you like more. I tried Bottles and went right back to Lutris because it works better for me visually, and for how I manage my prefixes.

Edit: I might be wrong here, but I'm guesing Bottles also tries to make general-purpose Wine prefixes instead of separate prefixes for every application, by having a "Gaming" and "Software" prefix, plus whatever else prefixes you might wanna make. Also there's a Flatpak, if you're into that. Which is definitely a great concept that will be useful to many people, I'll add! But it's also another reason I use Lutris, I like having a prefix for every game I play, and I definitely don't want Flatpak or Snap on my system.

I'm very interested in Bottles, so I'll ask: Can't you have this by creating a bottle for every game?
0 Likes

View PC info
It looks good ! Maybe its just me, but i always got lost in the bottles UI and config options. Maybe a small video tutorial would make things easy.
0 Likes

View PC info
This caught my attention because i have never succeeded installing anything in Bottles. I hope this means it's more intuitive to also install games. I don't know if i'm dumb, but i cannot wrap my head around how to use Bottles

Quoting: FrawoCan't you have this by creating a bottle for every game?

Oh absolutely, nothing's stopping someone from doing this! I just found it a bit more straightforward with Lutris. So technically there's no correct choice between the two softwares in this regard, but there's a lot more options to get lost in within Bottles.
1 Likes, Who?

Quoting: benjamimgoisIt looks good ! Maybe its just me, but i always got lost in the bottles UI and config options. Maybe a small video tutorial would make things easy.

View PC info
There are some itch.io games I should give a spin. I hope they are covered. Beacon stands out.
0 Likes
1/2»
While you're here, please consider supporting GamingOnLinux on: