Testing the Gioteck WX-4 Wireless gamepad on Linux, pretty good for the price

Always on the look out for new hardware that's good and cheap, I recently came across the Gioteck WX-4 Wireless gamepad.

Messing around with wires with the Logitech F310 was becoming a bit of a hassle, so I was looking around for something new to replace it. The Logitech F310 is a great wired pad, although I personally find the triggers far too stiff so I've wanted a different secondary pad for some time.

I will admit being extremely sceptical on this one. Gioteck is a brand I had neither tested nor heard of before but the WX-4 Wireless supports Bluetooth and USB, with a built-in rechargeable battery (10-12 hours approx play time) and it's incredibly light when compared with the Steam Controller.

The most important thing though? It works almost perfectly on Linux.

When paired up with the Plugable USB-BT4LE Bluetooth adapter (not included), it was stupidly easy to pair with KDE. Plug in the adapter, hold down Y + Home to turn on the Gioteck WX-4 Wireless and get it to be findable. Open up the Bluetooth Device Wizard and there it is: 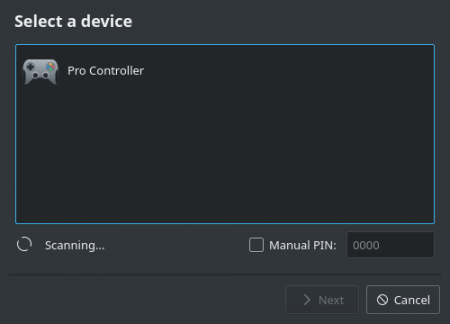 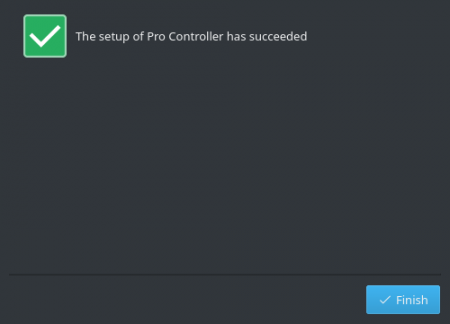 Since the Gioteck WX-4 Wireless can also acts as a Nintendo Switch gamepad, in Steam if you turn on configuration for Switch Pro you then get all the handy configuration options from Steam Input. 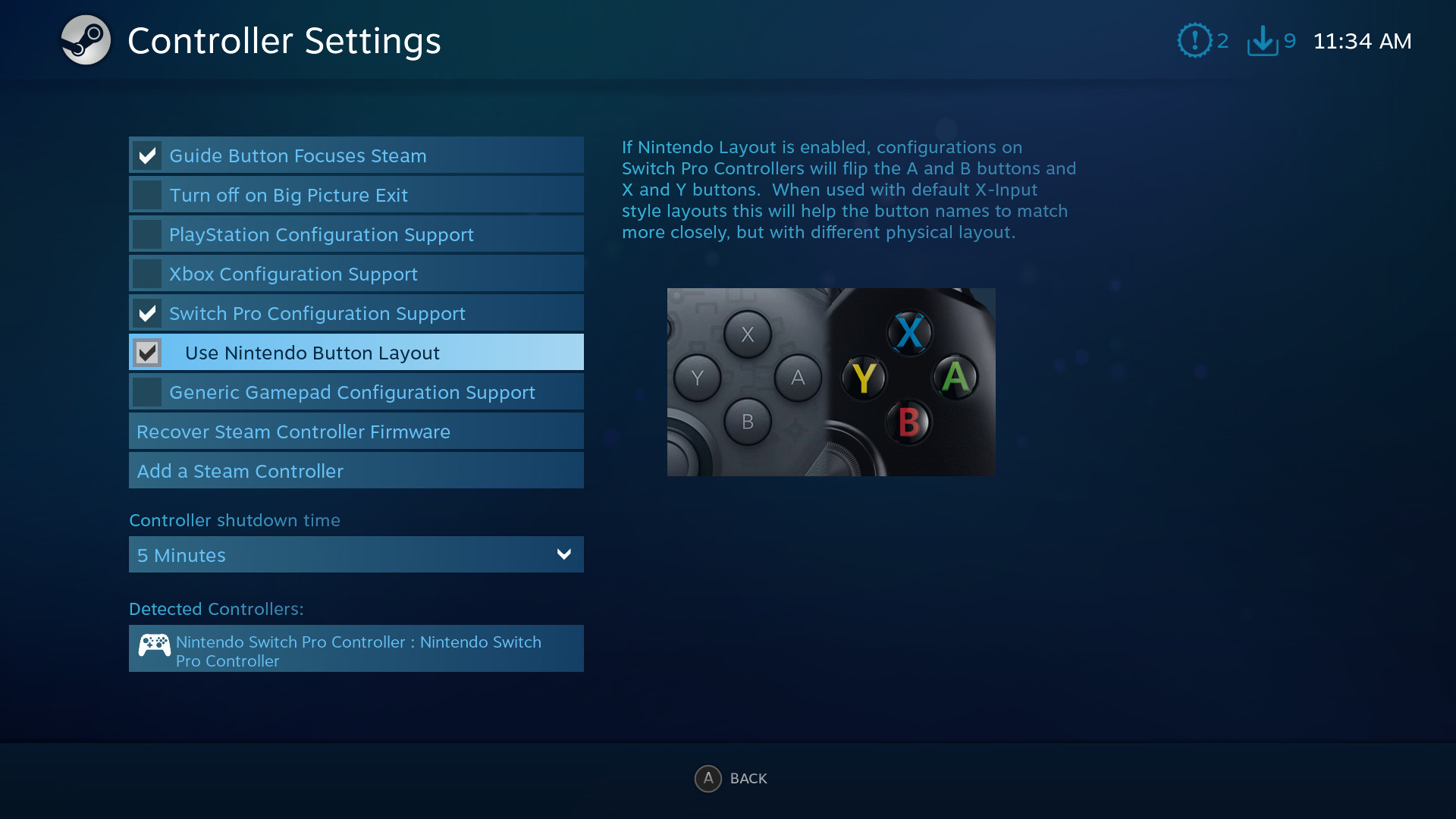 Tested across Rocket League, Blaze Rush, Baba Is You, Eagle Island, Hell is Other Demons and plenty more it seems to work great in Steam games. It's quite weird having the ABXY buttons switched around though, that alone will take quite some time getting used to.

So why did I say it works "almost" perfectly earlier? Well, Steam has Steam Input and that works directly with gamepads, Valve constantly add new supported hardware to it too and there's not a lot of messing around there.

However, outside of Steam is a different story as there's no driver for such a pad yet I am aware of, this little guide might help so keep that in mind. As of yet, I've not been able to get it working with GOG games. That will likely change in later Linux Kernel versions, since if you remember the Steam Controller wasn't directly supported with a driver until around three years after it released.

Apart from that the other most important thing is the price, it was £20 which I honestly find pretty ridiculous for such a good gamepad that's so far been beautiful to use. If you're in need of one for some Linux gaming fun, perhaps this may be it. With the caveats of using it outside of Steam.

See more about it on the official site. You can find it on GAME, shop4world and likely many other stores.

About the author - Liam Dawe
I am the owner of GamingOnLinux. After discovering Linux back in the days of Mandrake in 2003, I constantly came back to check on the progress of Linux until Ubuntu appeared on the scene and it helped me to really love it. You can reach me easily by emailing GamingOnLinux directly.
See more from me
Some you may have missed, popular articles from the last month:
The comments on this article are closed.
28 comments
Page: 1/3»

View PC info
I'm still using old Xbox360 controllers - these things were built like tanks. Honestly, at least one of them is now coming up about 8 years old and it's still in absolutely perfect condition!

Would definitely keep these in mind as a replacement, but I still have 2x PS3 controllers lying around too - I'd probably try them first before buying a new unit.
4 Likes, Who?

View PC info
I've been happy with the ergonomics of my F310, triggers and all, but the cable is a nuisance. The build quality isn't anything to write home about either. I'm on my second controller right now. I fixed the previous one multiple times, but this one started breaking apart in exactly the same way quite soon after purchase. The left thumbstick button (the one that triggers when you push down on the stick) is pretty much unusable already.

My next controller will probably be an F710 though. It's only about 15 € more than the F310 these days and I won't have to get used to a new layout. It comes with two AA batteries, but I've got AA rechargeables to replace them with. Battery life should be great according to reviews. The build quality should be better as well, but I guess I'll find out.
1 Likes, Who?

Quoting: scaineI'm still using old Xbox360 controllers - these things were built like tanks. Honestly, at least one of them is now coming up about 8 years old and it's still in absolutely perfect condition!

The only problem I have with mine is that the cable is a bit dodgy these days. Which gives me a strangely similar issue to Liam's here: it works great in Steam, but some (not all) non-Steam games won't reconnect when it glitches out, which can be a real pain. The unit itself is almost as good as new, though.

Mind you, if sc-controller's “mouse-like stick” emulation was as good as Steam's (I don't know why, but it just doesn't work as well), I'd happily go back to only using the 360 for driving games. The Steam controller doesn't feel as substantial, but it's good enough for most things.
0 Likes

View PC info
I like that you're sharing something with Linux gamers that isn't open-source nor particularly well supported on Linux itself but might just be interesting to us as gamers. I'll be interested how it works for you. (Me? I'm so addicted to the Steam controller, all other, more traditional controllers feel like they're made of clay. Lol!)
4 Likes, Who?

View PC info
Xbox One S + xpadneo all the way, even vibration and the vibration in the triggers work, It works perfectly even in games that are notorious for controller problems, It also supports multiple controllers, battery indicators. They are a bit expensive tho.
0 Likes

View PC info
20 BP for a wireless controller that also works on the Switch? Wow! I'll remember this article. I will have to take non-Steam games into account though.

View PC info
I'm currently stuck with a Dualshock 4 + SC-Controller via USB, kind of looking for a wireless alternative, hope the GOG games compatibility get better as that's what I only use.
1 Likes, Who?

View PC info
I have one good controller (that is Steam Controller I got as a gift from a good friend) and four 3rd party Xbox One Controllers from China that cost me less than 20£ total. Work equally beautiful without the unpopular layout.
0 Likes
Mal 27 Sep, 2019

Xbox one S with BT connection for me as well.

Although these Gioteck looks really nice, personally I don't like controllers with integrated lithium batteries. I prefer the good old AA powered ones. When they are out of juice, you just swap in your spare batteries and put the empty ones in the charger. Much better than waiting hours or using the cable.
4 Likes, Who?
Drakker 27 Sep, 2019

View PC info
How is the input delay? Does the latency cause any problem while playing?
1 Likes, Who?
1/3»
While you're here, please consider supporting GamingOnLinux on: