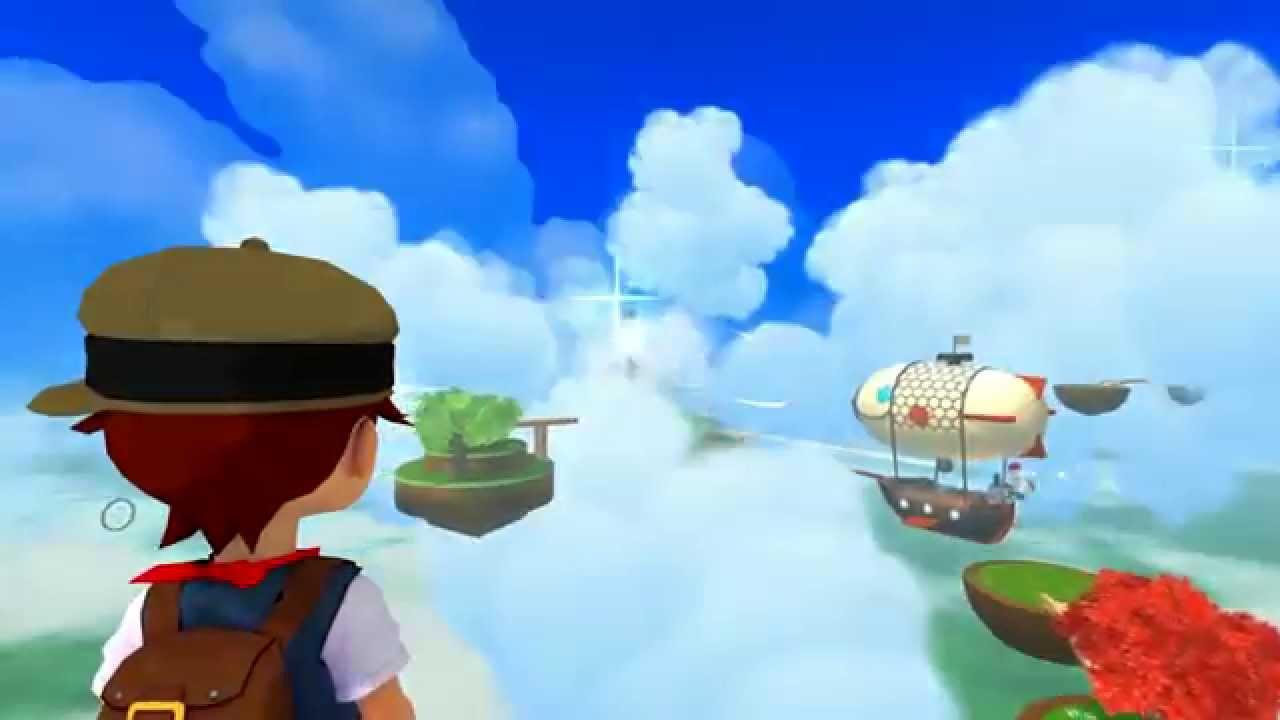 I've had my eye on Poi since it was on Kickstarter a few months ago, but since it was only planned for Windows and Wii U and was far from reaching its funding goal, I didn't nurture much hope that I'd be able to play it anytime soon; if ever. So I was delighted to see it announced for Linux this weekend, and immediately decided to get a copy and give it a try.

Poi is similar in design to collectathons like Super Mario 64. There is a hub world where you play a tutorial to learn the basics, buy equipment, and choose which worlds to play. The two currently available regular worlds each have several challenges based around exploration, platforming and collecting, and beating one sends you back to the hub. You can go back to the world as many times as you like to complete more challenges, find hidden items or improve your time. After completing your first challenge, you'll get access to challenge levels, where your primary goal is to reach the end as fast as possible and climb leaderboards. I've only played one of these levels, where I had to climb a set of rotating pillars to get to the top as fast as possible.

The main location of the hub is a flying ship with several islands floating around it. When you jump off the ship or an island, you plunge down through the skies and soar back up wearing a parachute you can use to get to islands, the challenge levels or collect floating coins and gems. Coins can be traded for items to use when playing a world, and the three that are currently available are a shovel to dig up collectible fossils, a telescope and a compass to help with finding things.

My first impression of Poi is that it gets the game feel of the classics right, and the worlds are interesting to explore and get around. I've spent about an hour in the first world and still have a few secondary objectives left, as well as most of the second world, so there's still a lot to do. If the game also gets some meaty updates during its time in Early Access, I think it will be a game well worth buying by the time it gets its proper release.

About the game (from Steam)
Poi is a 3D adventure platformer throwback to the 90s era of classic platforming games.

You'll explore large areas and smaller challenge levels in a search for explorer medallions. Getting those medallions won't be easy though, as you'll need to pull off classic 3D platforming feats in order to grab them. Run, jump, flip, bounce, balance, climb, slide, swim and more to collect them all for every level. Equip explorer tools and earn XP to level up in order to meet new characters and unlock additional worlds to explore.

Pick between a rambunctious runaway boy or girl character as you embark on a challenging journey to uncover the many secrets scattered across the world of Poi.

View PC info
It certainly does resemble Mario 64 quite a bit. Early access, though, so I'll file it in the check back on it when it's finished cabinet.
0 Likes

View PC info
Definitely going to keep an eye on this. I have to admit, I wrote it off until I checked out the trailer / article. I welcome the Nintendo-y vibe this gives off.

I also want to suggest they change the banner. The trailer screenshot looks WAY more representative of the game and is what caught my eye.

View PC info
It looks nice and cute. However i really don't like 3D platform games, i prefer by far 2D for this kind. Still nice to see more games coming to different OS.
0 Likes

View PC info
This might be fun, despite the online leaderboards nonsense. I hope you'll cover it again when it's out of EA.
0 Likes
Miqueye 13 Dec, 2015

cool, thanks for bringing this to my attention. it looks pretty epic!
I love to explore well crafted 3d worlds. hope the controls are tight.

Quoting: tuubiThis might be fun, despite the online leaderboards nonsense. I hope you'll cover it again when it's out of EA.

Unless something gets in the way, I will.

Quoting: Miqueyecool, thanks for bringing this to my attention. it looks pretty epic!
I love to explore well crafted 3d worlds. hope the controls are tight.

I find the controls to be very responsive and accurate. The only issue I've had with controls is that the camera snags on walls (and sometimes clips through the environment), causing awkward camera angles that sometimes make it difficult to get jumps right. It's something the developer is aware of though, and you can draw the camera in to your shoulder at the press of a button, so it hasn't been a big issue for me.
1 Likes, Who?

Quoting: fleskThe only issue I've had with controls is that the camera snags on walls (and sometimes clips through the environment), causing awkward camera angles that sometimes make it difficult to get jumps right. It's something the developer is aware of though, and you can draw the camera in to your shoulder at the press of a button, so it hasn't been a big issue for me.

Well, they want the feeling of 90's 3D platforms so much, so the camera problems are a feature, because this is how the old 3D games camera behaves :-)
0 Likes

View PC info
Anyone care to comment on the other two titles mentioned? FreezeME looks really nice from the trailer. Super Mario 64 was the first game I really wasted hours on. First kid in school to get 128 stars :)

Let us know what you think of it. (Not sure if I can resist the temptation myself for much longer.) We also have Yooka-Laylee, Lobodestroyo and Clive and Wrench to look forward to. The latter looks so much better than it used to now, after the developer got some help with textures for the characters.
0 Likes
1/2»
While you're here, please consider supporting GamingOnLinux on: