A look at 'Hybrid Wars', a top down action shooter from Extreme Developers and WG Labs 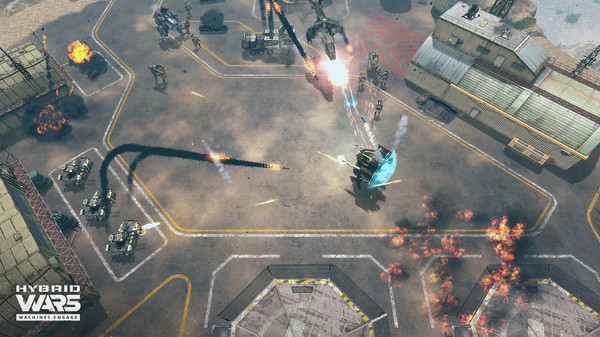 'Hybrid Wars' [Official Site] is a new top down action shooter that looked damn good from the trailer, so I managed to get a key to see if it's worth it for Linux gamers.

Graphically, Hybrid Wars is actually quite nice to look at. There's a nice variation in enemy units, your mech looks great and visually the explosions and effects look really great.

Graphics sure as hell don't make a game though, and it's another title where that's sadly very clear.

The real problem I have with this game is that the combat doesn't really feel great. Weapons don't feel like they have much power to them at all. Part of the problem is the sound design, the sound effects have little variation, low volume and they just don't sound very high quality. The explosions are the main annoyance, they nearly all sound exactly the same. Explosions have no meat to them, your big mech doesn't sound like it's firing off the massive weapon it's carrying and so on. The sounds are just lifeless.

It has some fun destruction though! Destroying power-lines, stomping on cars and things like that. That's probably one of the only satisfying things about this game, but even that feels like it just doesn't go far enough. The main building props cannot be destroyed, which is such a damn shame. Everything that looks like it would be so fun to level to the ground, generally can't be.

If you're after a top down shooter with great desctruction, Brigador is a vastly better experience. In fact, this game is essentially Brigador with more realism based graphics and a worse game overall.

You can't skip the intro scenes to each level either, which are quite slow the the camera scrolling around.

Issues:
- The games audio seems to get a bit corrupted if you alt+tab. You get an almost constant higher pitched whine and the speech is all muffled.

- To play online you need a Wargaming account, so you need to register. The problem is they only accept simplistic passwords, which annoy me. Signing up with them starts off their annoying email spam.

- It crashed to the desktop after only about 25 minutes play.

- The objective pointer seems to point the wrong way half the time.

- It seems no one plays it online, the online is essentially dead already.

To sum it up, it looks damn pretty, performs quite well when it's not crashing to the desktop, but as a top down action shooter it is a firmly mediocre title. It's a damn shame really, as it definitely looks the part, but it needs much better sound design and vastly better movement. Article taken from GamingOnLinux.com.
Tags: Action, Initial Thoughts, Steam
0 Likes
We do often include affiliate links to earn us some pennies. We are currently affiliated with GOG and Humble Store. See more here.
About the author - Liam Dawe

Waiter! Bring me my refund.
0 Likes
While you're here, please consider supporting GamingOnLinux on: