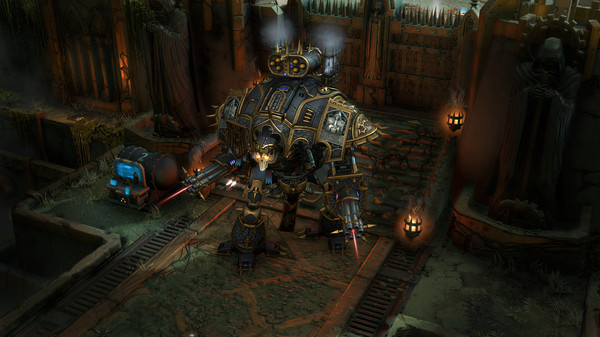 Take this with a big 'ol bag of salt, but it's possible Dawn of War III [Steam] might be coming to Linux. Thanks to a tip from a Twitter follower.

On SteamDB, Dawn of War III has two content depots named "feral_data_test" and "feral_mp_test". That's a pretty big indicator that something is happening, since Feral Interactive ported the previous Dawn of War II + the expansions to Linux it's also quite possible which gives this a fair bit of credit. Still, it is just speculation right now. Feral don't tend to talk about any of their work before release as well, so asking them would be pointless. Feral did do a teaser of a new port recently, so who knows, it could be.

It could also be nothing, since Feral do at times do Mac-only ports and ports in general don't always work out. The Batman game Feral was porting to Linux, for example, was cancelled. That doesn't happen just to Feral though, we are waiting on other ports that might never see the light of day like Homefront: The Revolution and Street Fighter V and plenty of others.

Personally, I find this extremely exciting as I'm a massive fan of strategy games and Dawn of War III does look very good.

Note: As always, I recommend not buying it until it's released (if it comes), buying it before release likely stops the porter getting paid. Article taken from GamingOnLinux.com.
Tags: Feral Interactive, Speculation, Steam
14 Likes , Who?
Share

View PC info
I hope this port happens.
4 Likes, Who?

View PC info
I hope it happens, I also hope the game gets fixed up by that time as many reviews indicate that DoW3 was a rush job. I mean, the game doesn't even have key rebinding. That's completely inexcusable in a RTS.

View PC info
instant buy from me as well if true.
I already have DoW2 from when I still dual-booted for gaming...
1 Likes, Who?

View PC info
Cool , would look forward to it.
Did drool over the steam page a bit.
If it does get ported will wait for release and see if it is good or if it is rushed and needs some patching to live up to expectations.
0 Likes

Quoting: gojulIf it gets released it will be an instant buy for me.

View PC info
I hope it comes to Linux, but this looks like the worst Dawn of War game ever so I won't let this atrocity touch my hard drive.
0 Likes

View PC info
So many RTS games for linux...
0 Likes

Quoting: zimplex1I hope it comes to Linux, but this looks like the worst Dawn of War game ever so I won't let this atrocity touch my hard drive.

if you are talking about those over negative comments/reviews on metacritc or steam, you have to keep in mind that this happen to DoW2 also because it was so different from DoW1 and CoH2 got A LOT of negative reviews in metacritic from russians

anyway most of the negative comments have been that its not the DoW1 or DoW 2 remake what they wanted...and/or because it has some MOBA, Starcraft and Warcraft 3 elements and that means it's exactly like those games gameplay style...with that logic DoW2 is way more MOBA than DoW3.

what DoW3 really is, it's a combination of the previous games and with some borrowed elements of other games to enhance experiense, some will like them or not...you can't please everyone.

another negative comment has been about the graphics that they are too "cartoony" and the animation aren't that great..
I personally don't really see this, okay maybe some areas of the maps...maybe little bit.
What Relic wanted to make DoW3 to look more closer to the table-top's figurines...thats why it's more colorful and that doesn't make it cartoony. DoW2 (and 1) was also "cartoony" just more darker...also if u check 40k art style there is some that are really colorful and some are darker, if you prefer the darker style that's fine, it doesn't make this any more wrong/bad.

anyway, is this game perfect? oh god NO but the core elements are good, the only problem I have with it is that there is only 3 factions and little bit to few MP maps and 1 game mode.

some of these things were postponed and will arrive later (unfortunately), but the biggest question is that how (and when) will these arrive....the good thing is that there is MOD support and there is already few maps made, and at least on CoH2 Relic did add the most popular ones to the game

so I would give this game a 7 or 8 in its current state...and as Relic has been working a lot with the community before to fix stuff in CoH2 I do think DoW3 has good future, plus the game seems to run way better than CoH2 or DoW2...thank god.