It seems the latest Battle Pass for Dota 2 is going to be a pretty interesting one, as it's bringing a new game mode which sounds a little like a squad-based Battle Royale. 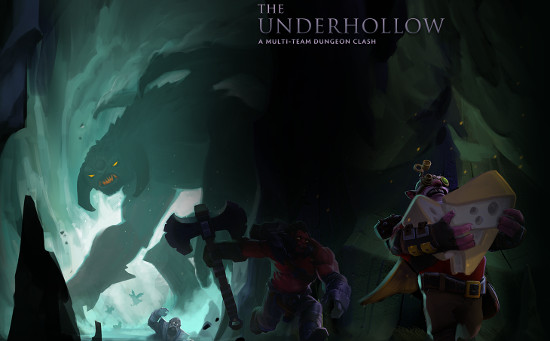 The new mode, named The Underhollow is "Coming Soon" and it will see groups of three battle through a labyrinth filled with monsters to find Roshan's rarest cheese. Sounds pretty amusing, but it ends with an all-out fight as you attempt to be the last team standing. It seems you will be forced into a specific area, with cave-ins happening (much like the circle of death in Battle Royale games).

The mode actually sounds like it could be a lot of fun, it's a shame it's time limited with the Battle Pass, sounds like something I would be happy to play regularly.

There's also a new Mutation Mode, an unranked mode filled with random modifiers from global Rupture events to the ability to resurrect your teammates. Each day will see a new set of modifiers to keep it fresh as well, so it's going to be pretty chaotic. You're also going to be able to spray stuff onto the map, new themed creeps, tip battle points to other players who're doing well, set your lane preference before matchmaking and so on.

You can find out more here.

Article taken from GamingOnLinux.com.
Tags: Battle Royale, MOBA
8 Likes, Who?
We do often include affiliate links to earn us some pennies. We are currently affiliated with GOG, Humble Store and Paradox Interactive. See more information here.
About the author - Liam Dawe

So, I thought with the subscription service I have signed in(Dota plus), I would have access to all battle pass stuff, but hey, you have to pay every month and also buy it. Isn't it nice?....

gustavoyaraujoSo, I thought with the subscription service I have signed in(Dota plus), I would have access to all battle pass stuff, but hey, you have to pay every month and also buy it. Isn't it nice?....

It was never mentioned that Battle Pass would be included. Especially since Dota Plus is cheaper, it would end up causing people to sub for a month to get it cheaper and then cancel it.
0 Likes

View PC info
I don't mind getting the Battle Pass even if I only play the temporary stuff once or not at all. I really like watching the International and don't mind chipping into the winnings pot. I watched several full games last year and most of them were really exciting.
0 Likes

gustavoyaraujoSo, I thought with the subscription service I have signed in(Dota plus), I would have access to all battle pass stuff, but hey, you have to pay every month and also buy it. Isn't it nice?....

It was never mentioned that Battle Pass would be included. Especially since Dota Plus is cheaper, it would end up causing people to sub for a month to get it cheaper and then cancel it.

There has been quite an uproar on the Dota 2 steam discussion boards about this. It is a simple misunderstanding, but it seems to be getting some players upset about it. Dota Plus includes free access to the similarly named weekly 'battle cup' - a weekend ranked tournament bracket.

Also, Liam... I'm not sure whether to love you or hate you right now. I decided to take another look at Dota 2 after you wrote the article on Dota Plus. Previously, I had played Dota 2 a few years ago for one game and decided I didn't like it and had no interest in the genre of MOBAs. I was curious, however, about the subscription service and the arguments of whether it was pay-to-win or not. So I decided to reinstall the game and investigate. I found that it is in fact not pay-to-win. There are plenty of community websites that will give you the same kind of advice that the subscription service does. It simply makes the information easier to get to by including it in the game's user interface. I also found that I don't actually dislike this game. I actually love it now and am almost completely addicted to it. So thank you, Liam, for introducing me to my new favorite multiplayer game. (It is so nice to only have to wait 5-10 minutes for a multiplayer game at 4am on a Tuesday morning). And damn you, for significantly increasing the difficulty of me having a productive day. (I'm kidding, of course

I was a bit of an addict at one point, but glad to know I helped you find a game you enjoy!
0 Likes