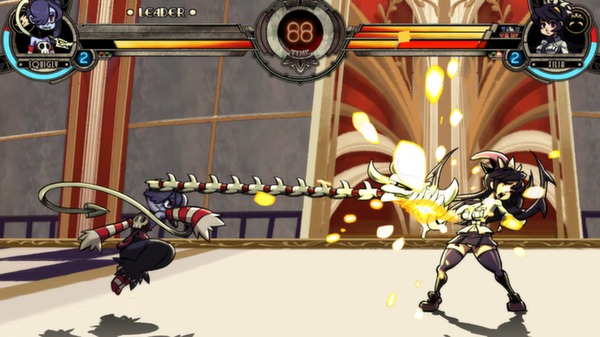 Skullgirls has been a sore spot for Linux gamers who backed it on Indiegogo due to the poor way it was presented, but that aside progress is progress.

In a big post on reddit, a developer from Lab Zero Games posted up information with screen-shots of the menu working.

Here's a quote from it:


QuoteOur first mistake was assuming that a person (albeit a competent and skilled one) volunteering to do it for free was concrete enough to declare that it was officially coming out.

Our second mistake was not making it explicitly clear when announcing that a Linux version was coming that it was being done by a volunteer.

Our third mistake was to add something that wasn't wasn't under our control (or fully funded, like the PC version(#)) to the backer rewards for our campaign.

Our fourth mistake was not making it explicitly clear on our campaign page that it was a volunteer effort.

These mistakes were entirely ours, and we own up to them.

It's really nice to see them own up to it all, and try to make good on it. I think we should give them a little bit of slack now.

This post does clear up all confusion surrounding it all, as the PC version was funded by someone else, and the Indiegogo was to fund the DLC with the inclusion of a Linux key at certain levels, but it was not to fund a Linux release.

Yes, it should have been A LOT clearer, but that can't be changed, so we should accept them trying to make good on it all.

See the screen-shots here on imgur.

What are your thoughts now?

Personal Thoughts
I am still shocked no one in their group/company didn't think about clarifying it at the time. I say it time, and time again, be open with your customers. I struggle every single day to figure out why developers don't just say what's going on from day one.

Also, considering the amount their Indiegogo was over-funded by, I am still surprised they can't afford to hire help for the Linux port. It wasn't far off a million, and many developers have made pretty good entire games for far less.

So, I am still a little miffed by it personally, but their attempts to fix it are great. If it does eventually come out (I feel it will) then we can put this all to rest, and play a decent fighting game. Article taken from GamingOnLinux.com.
Tags: Editorial
0 Likes
Share

We do often include affiliate links to earn us some pennies. We are currently affiliated with GOG and Humble Store. See more here.
About the author - Liam Dawe
I am the owner of GamingOnLinux. After discovering Linux back in the days of Mandrake in 2003, I constantly came back to check on the progress of Linux until Ubuntu appeared on the scene and it helped me to really love it. You can reach me easily by emailing GamingOnLinux directly.
See more from me
Some you may have missed, popular articles from the last month:
The comments on this article are closed.
6 comments
Ignis 6 Jan, 2015

I'll believe when I see it running in native 64-bit glory :} Linux could use some fighting games, that's for sure.
3 Likes, Who?

View PC info
I almost bought this when it first came out, on their promise alone. Fortunately, I've been holding off until an actual Linux version exists.

These kinds of things do make me wonder how many of these 'statistics' quoting low Linux use are counting Linux users who've bought before the Linux version came out (on the promise that it will be forthcoming) as confirmed Windows users.
0 Likes

How come I'd never heard this? I have (the original version of) Skullgirls on the Sony PlayStation 3 and it's fantastic!

Anyway, I totally just added this to my Steam "wish" list, for if this comes to Linux-based operating systems...
0 Likes

Quoting: IgnisI'll believe when I see it running in native 64-bit glory :} Linux could use some fighting games, that's for sure.

* I'm working on the clean-up, integration and implementation of what's needed on an x86_64 Funtoo
* The screenshots were taken on an x86_64 Ubuntu 14.04.1 LTS
* The newest video I posted was done on my Funtoo, too.