EVERSPACE is finally nearing a release on Linux, initial release will be under the radar 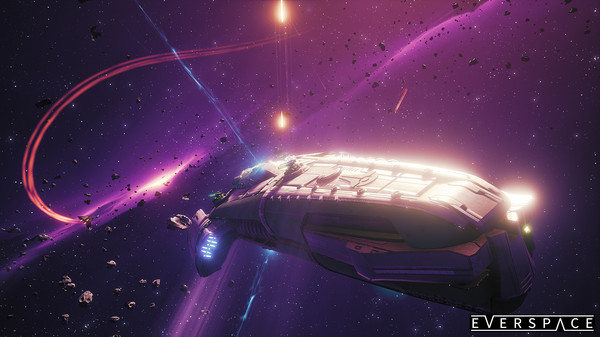 The Unreal Engine space shooter EVERSPACE [Steam] is finally nearing a Linux release, they've managed to overcome some problems and "soon" it will be released under the radar.

They've had driver problems, issues with Unreal Engine itself and so on, yet they've continued powering on. Just take a look at the good news:

Thanks a lot for all your kind words and your understanding!

And for a change I do have good news for you: We still have problems on AMD cards, but on NVIDIA the game is up and running again and amazingly enough it seems that on NVIDIA all graphical issues have been fixed! We playtested a bit earlier today and there were a few issues with the controls and controls customization and we could not switch languages (which should be an easy fix) but other than that it all looked very promising.

So the plan is to first release the build "under the radar" to players who already backed or bought the game. (Without Linux support showing up on steam). I can't give you an exact date, but I think it's going to happen soon. Yay!

I have to say I'm really impressed with these developers. They've communicated exceptionally well and kept at it when a lot of developers would have likely given up.

I think they really deserve our support.

Article taken from GamingOnLinux.com.
Tags: Action, Indie Game, Steam, Unreal Engine, Upcoming
28 Likes, Who?
We do often include affiliate links to earn us some pennies. We are currently affiliated with GOG, Humble Store and Paradox Interactive. See more here.
About the author - Liam Dawe

tuxintuxedo 25 Aug, 2017
View PC info
I am curious whether the AMD problems are driver related and in that case, which one (open-source/closed). Maybe knowing that and asking the community would speed things up.
1 Likes, Who?

View PC info
Once AMD works I am totally interested in this game.
2 Likes, Who?

View PC info
Very cool. Will be buying this and looking forward to playing it.
1 Likes, Who?

View PC info
Will there be VR support on the Linux version?
0 Likes

View PC info
Under the radar. Until Liam posts that it has released. :P
8 Likes, Who?

Quoting: EhvisUnder the radar. Until Liam posts that it has released. :P

It's a stealth article, doesn't show up in radar.
1 Likes, Who?

Quoting: EhvisUnder the radar. Until Liam posts that it has released. :P

It's a stealth article, doesn't show up in radar.

View PC info
Great! Did they file bugs to Mesa? I'd like to see what actually is wrong before buying it.

UPDATE: Weirdly, I can't find anything by searching Everspace on the Mesa bug tracker. So how do they expect these issues to be resolved, if they never even field any bugs?

Quoting: tuxintuxedoI am curious whether the AMD problems are driver related and in that case, which one (open-source/closed). Maybe knowing that and asking the community would speed things up.

I was wondering the same. I certainly hope that they are testing against the open one, as it's generally better and more compliant, in addition to the other benefits.

I am impressed with those guys, and I really hope the necessary UE changes went back in the mainline, (as it would mean more port, therefore more potential Linux gamers, and more potential buyers for their game, due to the filtering effect ;))
0 Likes

Quoting: MayeulCI was wondering the same. I certainly hope that they are testing against the open one, as it's generally better and more compliant, in addition to the other benefits.

See above. There are no bugs that mention Everspace filed for Mesa. I suspect users will have to do it for them. I wonder if they even contacted Mesa developers at all about it.

I'll try reaching out to the studio through Kickstarter, may be they'll clarify what's going on.