Fending off monsters in 'Colony Survival', some early thoughts

Colony Survival [Steam] is a new Early Access mix of a strategy game and a survival game with a voxel style, but is it any good? 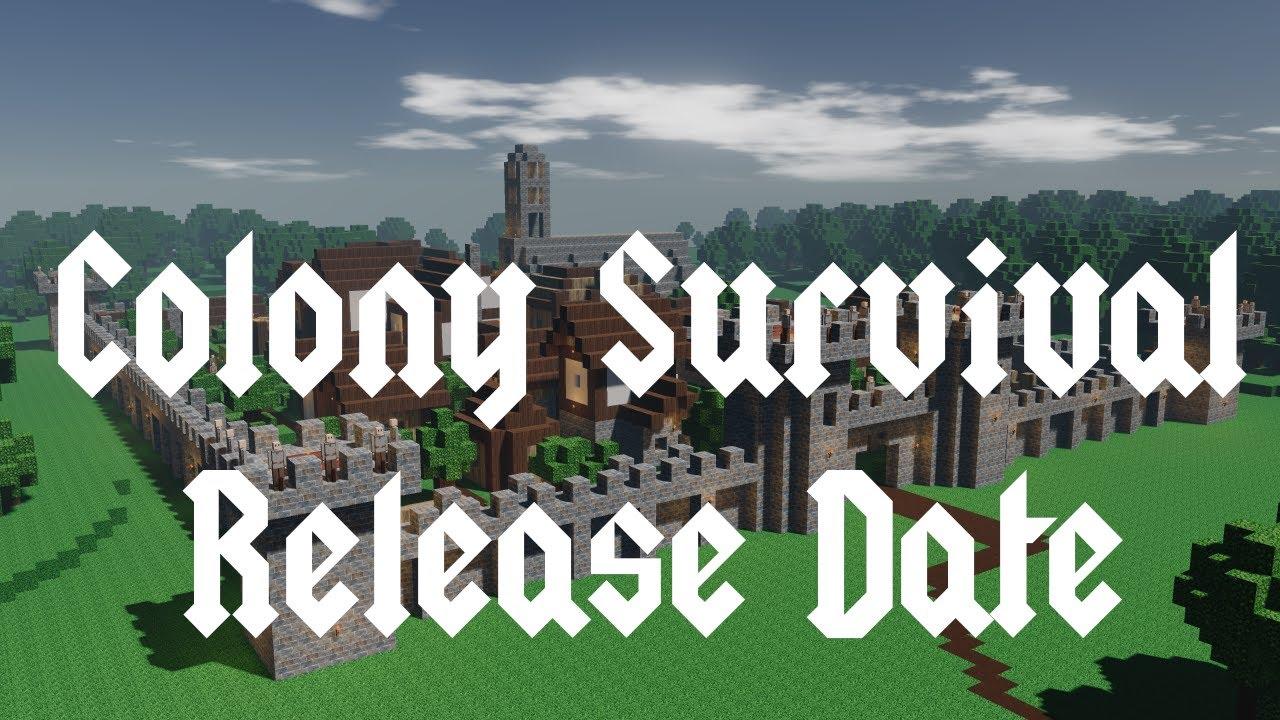 I travelled across the lands, with my banner in hand ready to settle down and begin a new life. Little did I know of the horrors that awaited, hiding in the shadows. I settled in the forest, thinking the trees might help shield my tiny colony, but I was wrong. They came during the night, the monsters with their horrifying glowing eyes and Burt was the first to be munched upon during his slumber.

In hindsight, placing a colony in the middle of a forest was a crap idea. You need plenty of flatland to mark out areas for crops and an uneven location made it a nuisance.

Going by the trailer, I honestly thought this was more of a strategy game with a free roaming camera, something like Rise to Ruins, but I was wrong. It's first-person and you do actually control a person within the colony. It feels a little odd, that you're an actual person in the colony, but you're not able to do most of the actions involved in running it. You can craft some items and place blocks down, but you can't make bread, you can't harvest the berries and so on. It makes it a little annoying, to be in a position of control, while being down on the ground as one of the people, but being able to actually do so little. 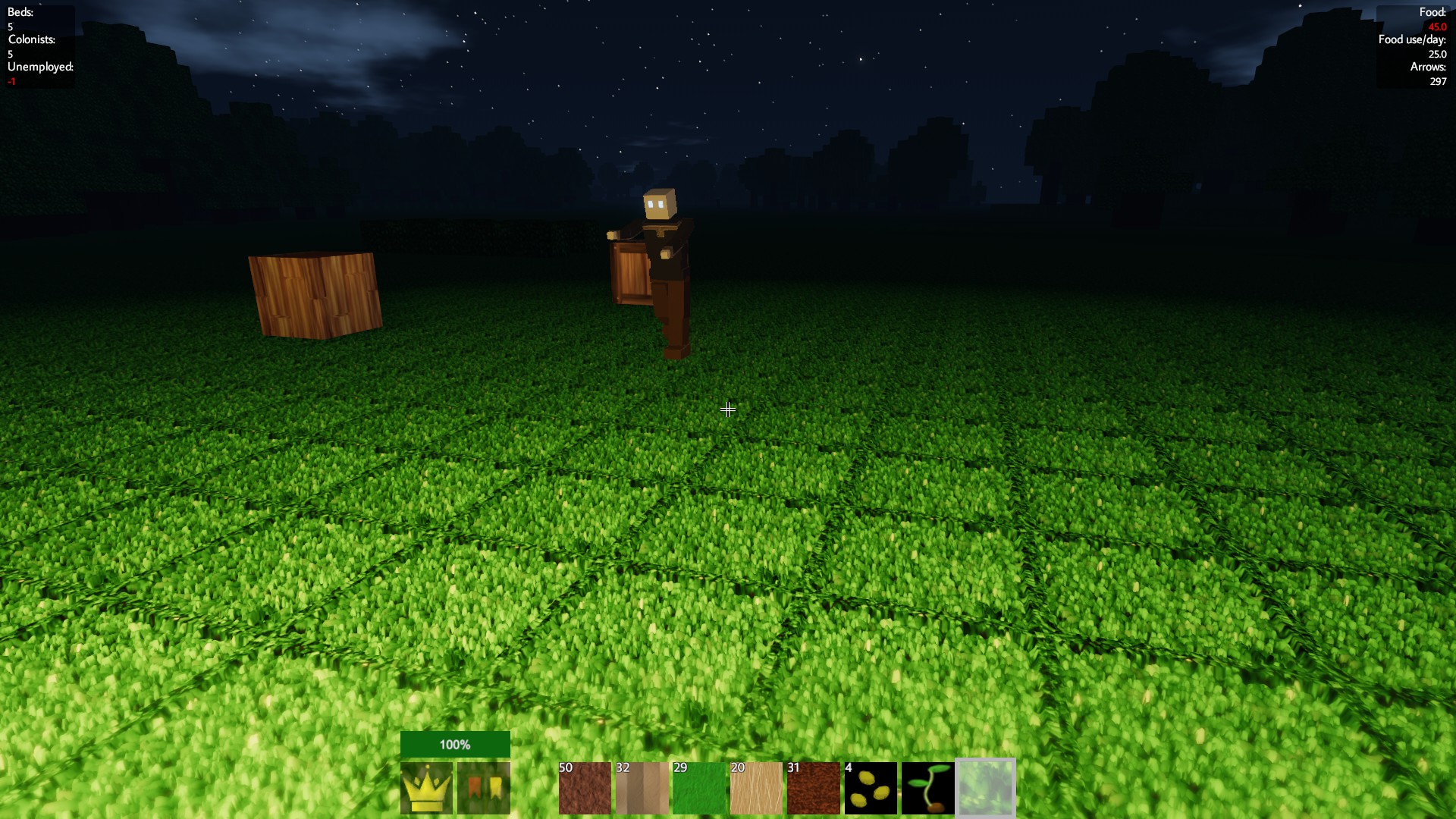 Ah yes, another survival game that looks like Minecraft you might say, do we really need yet another one? Well, Colony Survival is a little different at least. You control and build a colony, instead of just surviving by yourself. So in terms of gameplay, it is very different.

Essentially, it feels like Minecraft with some added Tower Defence and colony building. That's probably the easiest way to describe it right now. You can plop down an archer and these fearless heroes just stand in that spot, forever watching and defending.

Food is the main nuisance right now. You need a certain amount of food each day and you need 50 food to recruit a new colonist. So you need to sort that out early on and as quickly as possible, otherwise you're going to run into some annoying issues and a lot of waiting around. It seems right now that if you don't focus on food massively at the start, you're screwed. Considering the limited options for food it's a little boring.

There's no pause option, even in single player, which is a big nuisance. If you even want to pee, you seem to need to quit the game. This is especially a nuisance while learning to play the game, since time continues to pass even if you're reading in in-game quick help.

I tried flying around for a bit of fun after enabling the cheats, because I got bored of standing around watching my baker standing there attempting to bake all day, when we had no wheat. So far, it seems there's literally nothing interesting to find, at all. The annoying thing is that the game only renders a small square around you, so I completely lost my colony and gave up. That was colony attempt number five.

Graphically, the main visuals of the game are a lot like Minecraft, but less pixelated. The textures are better, the lighting is much better and so on. It's not all rosy though, as the icons for the crafting are something I would imagine I would have come up with in a simple paint program, they're a bit of a sore spot. 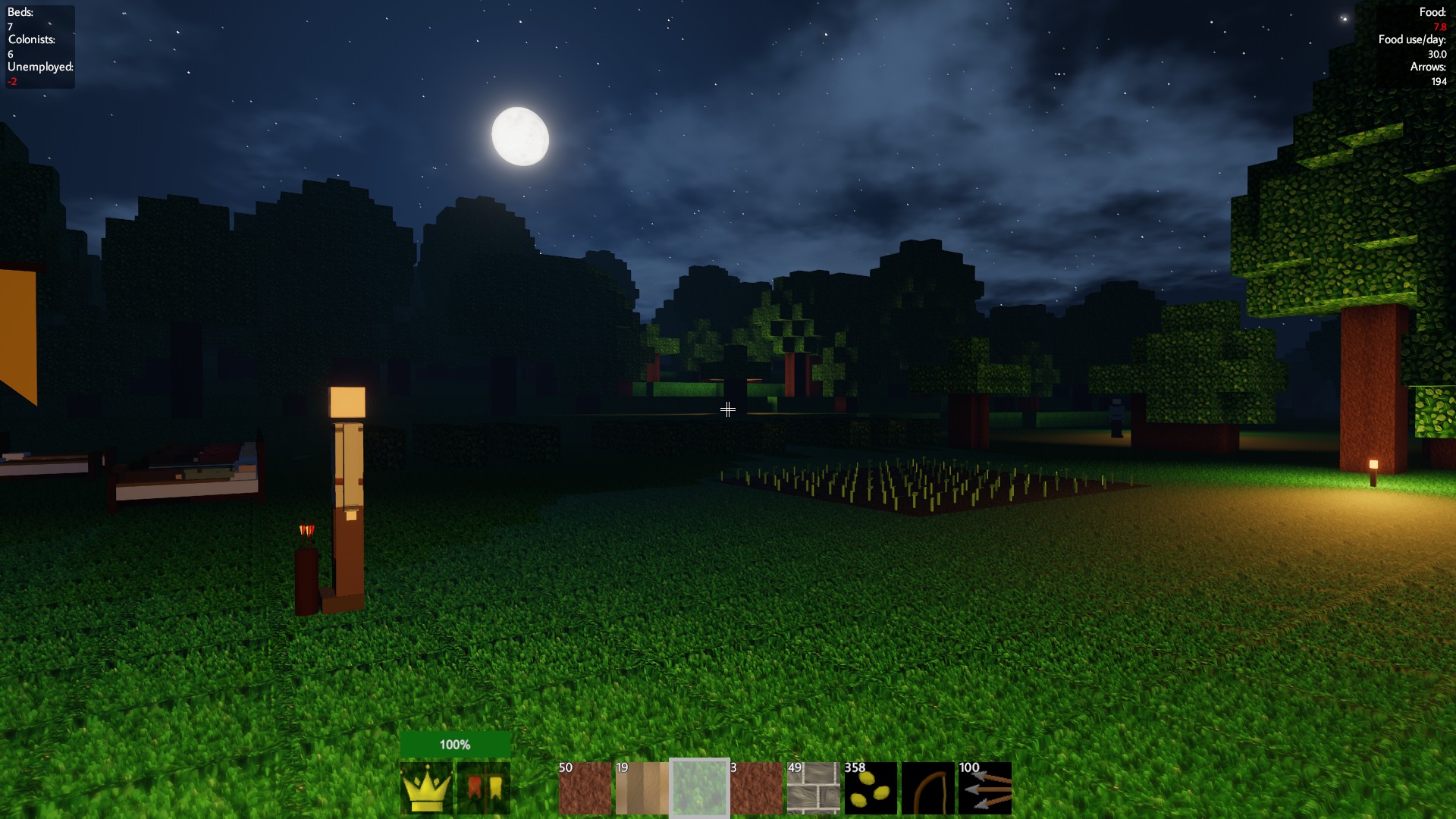 I tried covering this by playing with iAlwaysSin together, but the Linux server just doesn't work. I sent the developer a log of it so hopefully they can find a fix, they haven't replied to the email yet. They also need to update the in-game instructions for hosting a server, since it's Windows-centric right now.

Part of the problem with the Linux server not working, is that the dedicated server is your only choice if you want to play with friends. You can't just open a game to others from inside the game, you have to use the dedicated server build. I hope they adjust that in future, as it feels a bit pants. If there is a way to do it without the server, it's certainly not made clear.

Also opening the PDF manual doesn't work on Linux, the button just does nothing. I've no idea where to find it either, as it didn't appear to be in the games install folder. So I guess for now I'm stuffed if I want to learn more.

While the idea of the game is sound and it could be interesting when it's further developed, I'm not quite yet finding the fun factor in it as it stands now. There's limited choice when it comes to blocks and the types of colonists you can have. The combat is currently completely lifeless, limited and overall right now it's just too early to recommend. Once you get a colony going, there's nothing else to do since they're basically doing their own thing. There's too much waiting around doing nothing a lot of the time, it just needs more of everything right now.

I will take another look when it's had more time to cook. Article taken from GamingOnLinux.com.
Tags: Early Access, Initial Thoughts, Steam, Strategy, Survival, Colony Survival
3 Likes, Who?
We do often include affiliate links to earn us some pennies. We are currently affiliated with GOG, Humble Store and Paradox Interactive. See more information here.
About the author - Liam Dawe

View PC info
thanks for the review I've been on the fence about it for awhile. I'll leaning toward not getting it right now. but i'll wait and see how this develops later on. hopefully the devs put more work into it.
0 Likes

View PC info
I have already looked into this one, it's certain that we'll just have to give it time to see how it develops given its current state.
0 Likes

View PC info
I bought it a week ago or something and it needs a lot more work before it's anything to use more than 30 minutes on. The hour I played mostly went to figure out how things work, and then it became boring.
Got two archers and a worker, ran out of food, started to farm and mine myself, removed some workbenches to get the worker to switch jobs and after that it wasn't anything left to do

View PC info
FWIW, the PDF works for me. Seems to just run xdg-open. (process tree screenshot
But overall I have to agree, it gets boring rather quickly in its current state. At least the developers seem to be serious about Linux support, as all the issues I reported have been fixed rather quickly.
0 Likes

View PC info
I have the game and have to say right now it's not really that interesting. Basically think minecraft early alpha but with fewer blocks. You do have the benefit of having colonist, which is a nice idea, but right now it just feels too pre-alpha and more of a proof of concept game. I think I spent about an hour and feel I have taken the game as far as I can. It's one to keep an eye on for sure. Given it's only been in open alpha for a month, this level is expected.

So if you want something similar, try minecraft with the millénaire mod. Then try this game in a few months. Would love to see what they do with it and if they open it up to modding.

Actually this sounds like what happened in early alpha versions of minecraft. Brings back memories.