Ballistic Overkill, a cheap and quite decent online FPS game has released a new update named Bloodlust full of tweaks for their newer Rounds game mode. 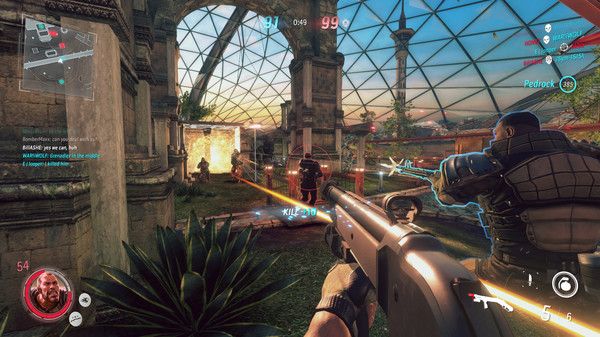 The Rounds game mode is where two teams fight for survival as each player only has a single life. It's pretty frantic and I actually quite enjoyed the new mode (despite a few early issues). These tweaks aim to make it a bit more "aggressive". Now, you will get more points the earlier you take someone down and less as the round goes on. So campers beware, you might end up low down on the scoreboard…

They also fixed some bugs, added the Rounds mode to the leaderboards, reduced the warm up time from 34 to 26 seconds which is nice as it did feel a bit too long and a few other balance and performance tweaks.

I'm glad to see them continue to support it, because it is a good game. It definitely needs some new maps though, which I've been saying for a while now. It's also on sale right now, could be a good time to pick it up. Check it out from Humble Store or Steam.

View PC info
What does "Now, you will get more points for your kills based on how far into the match you took down your enemy." mean?

Quoting: SuppenWhat does "Now, you will get more points for your kills based on how far into the match you took down your enemy." mean?

Adjusted it to be clearer, more points the quicker you are.
2 Likes, Who?

View PC info
The maps are such BS yeah, otherwise it's a fun game!
1 Likes, Who?

View PC info
No offline bots yet?
1 Likes, Who?

View PC info
So I started playing this game again, since I've returned to Steam. I am still very much in the middle of like/dislike with how I feel about this game. Perhaps, it is because I'm an older gamer and use to quick deathmatch games that I can LAN with family and friends. I picked this up as it was the first MP shooter that I purchased/supported that did not have those feature to see what that's all about. That aside.

I still have issue with teams not being evened out until players decide to switch. Why there is not auto-switch, I have no clue.

Lately, I've been in matches with players that are really high ranks and levels with really elite weapons and those usually do not go very well. I am still under 20 level with the Berserker which I am trying unlock all the stuff for.

I've had some great matches with people when then the servers are full but when they are low it's pretty bad. That can only be helped with more players, tho.

They're should be an offline mode to try out the classes at least. Having to join a match with a new class and having permanent stats of that match affect your always shown stats when loading the game blows.
1 Likes, Who?
While you're here, please consider supporting GamingOnLinux on: