We don't see many games like this on Linux at all, so it's great to see the helicopter combat game Heliborne [Steam] release in full. 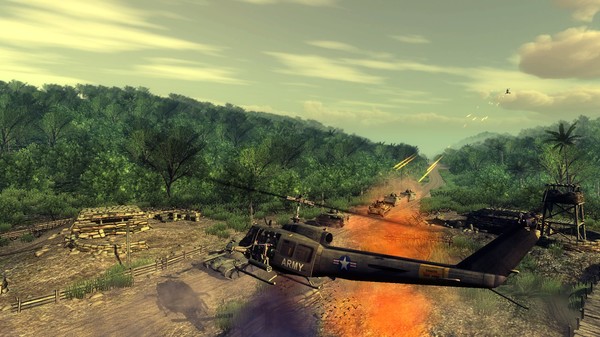 It's actually not a bad game once you get into it, the dogfights are pretty damn fun and can end up quite hectic. Graphically, it does look quite good, especially the rather nice helicopter models which are surprisingly great.

It includes 40 different helicopters spread across many different generations, with single-player, co-op and online modes along with big wide open maps to fly around. There's multiple control schemes, so you can pilot in an arcade way or a more realistic way to appeal to wider audiences which is sweet.

The main problem I have with Heliborne is the terrible UI before you're able to get into a game. The lobby UI is messy, confusing and needs a fair amount of work to make it inviting to new players. I get confused every time I load it up to be honest, it's just rubbish. There's no way to just jump right into an open battle, you have to pick a battle and see if it lets you join. You're only able to join specific battles, which they need to make a much better job at explaining in the UI directly.

If you can look past the crap UI, the actual gameplay is pretty good. Worth a look I think. You can find Heliborne on Steam for £15.49.

View PC info
I can't recommend this game enough. The developers are super responsive and the game is great, even if you don't have a flight stick. But with a flight stick it's the best.
3 Likes, Who?

View PC info
And now I have to buy it, not least because they made a Polish camouflage pack for some reason, not that I'm complaining.

It looks very cool. I need to dig up my Thrustmaster HOTAS set. I wonder if it'll work with Linux. I will certainly need to get a joystick port to usb adapter.
0 Likes

DMJC 15 Oct, 2017
View PC info
Thrustmaster HOTAS Cougar works on Linux, unfortunately all of the programming utilities don't work natively. You can use a VM to upload the profiles to the stick.
0 Likes
While you're here, please consider supporting GamingOnLinux on: