Hover : Revolt Of Gamers, a Parkour game styled a little like Jet Set Radio is on Linux 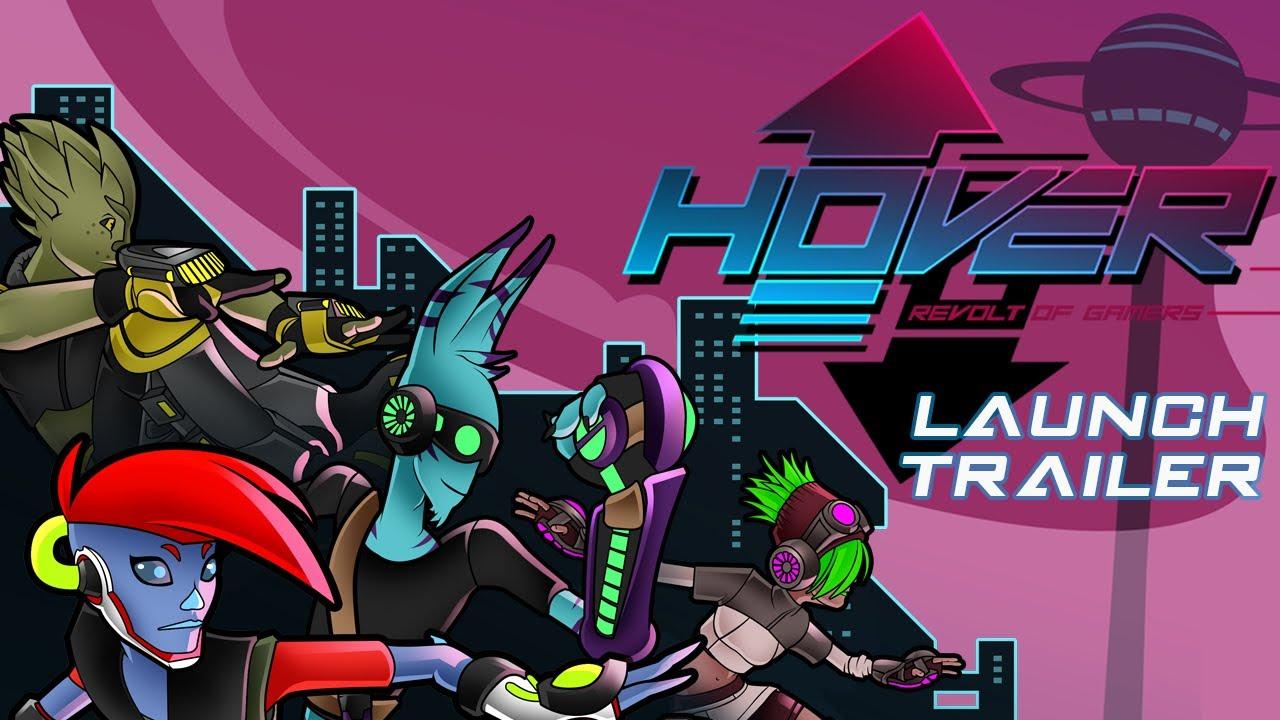 
QuoteHover: Revolt of Gamers is a fast-paced single and multiplayer Parkour game in a futuristic 3D Open World.

The game takes place in ECP17, a high-tech city also called Hover City by its inhabitants and located on a distant planet. The Great Admin cut the communication with the Galactic Union and established a strong dictatorship. Having fun has become illegal and entertainment is banished.

Hover: Revolt of Gamers is both a single and multiplayer experience. At any time you can instantly switch from offline to online mode and join your friends or players from around the world and progress through the adventure by cooperating or playing against them. No matter where you are and what you’re doing, you’ll be able to connect. Hover: Revolt of Gamers is also a community-driven game offering many tools to players to create missions or mini games.

It looks fun, crazy fun! I'm surprised no one emailed in about this one, I imagine a fair amount of Linux gamers missed it due to them adding in a Linux version at the end. I only found it while browsing through the game queue feature on Steam, so that was lucky.

If you give it a shot, let us know if it's any good! The user reviews on Steam certainly give a good picture overall. Article taken from GamingOnLinux.com.
Tags: Action, Adventure, Steam
9 Likes
Share

AskQuestionsLater 28 Jul, 2017
View PC info
I actually backed this one on Kickstarter, only to wait for ages for a Linux version to come to Steam.

I've played through the early stages, and I can feel the edges of what might be a good game here, but Rocket League is still stealing most of my play time :-)

Although, given how utterly messed up the Rocket League match-making system is right now (lots of games cancelling, games losing one player never waiting to find another human player after a game ends, games losing two players getting stuck in Finding Player Limbo after the match ends), I might play it some more.
0 Likes

chimpy 28 Jul, 2017
View PC info
I still have the OG Jet Grind Radio for the Dreamcast, man I loved that game, but does this one also have tagging like JGR had?
0 Likes

AskQuestionsLater 28 Jul, 2017
View PC info
You can slap graffiti in certain areas (indeed, you gain XP by defacing certain signs and smashing others). Not sure about general tagging - I'll have to play it more and see.
0 Likes

View PC info
I actually pre-ordered this game. I have put in over 12 hours into Hover. It's quiet good but suffers from the Unity fullscreen bug & the systems cursor never disappearing from patch to patch. It seems like every time they fix one thing, they brake another. It also had achievement bugs so they patched that and got the cursor problem again. As for a sort of review..

Once you first start you create your team & character which is the basic of all basic characters as you have to unlock the others. Teams can hold only a number of characters so you basically have no choice but leave slots for a slam/throw built character (For the ball missions) & a speed/jump character (for races/timed/gate courses). Which sort of leaves some of the unlockable characters to be useless in my opinion. Anyway, the character creation is fairly nice as you customize the colors of your character & your team mumbo jumbo. After creating all of the above it throws you into a tutorial, one you can't skip. Each character creation you go through it again, but luckly if you're fast enough in the third room there is a quick exit to the main world. Yet miss that window of opportunity and you have to either restart or go the full tutorial.

In the begining after finsihing the tutorial, it's quiet slow and kind of annoying to do missions. This is mainly due to the fact you're a low level with no perk/skill deck open with basic and/or zero perk/skill worth anything. Even more annoying on the very first character you have as it's quiet neutral on the skill tree unlike other characters you unlock that start with speed, jump, et cetera bonuses. What I always did before doing anything on a new character was go about the open world doing tricks to build up some levels. Also, hunting out the treasure chest thrown around the worlds is a great start. You get alot of junk from them, but you can go to trading stations that if lucky you get a decent perk/skill for all your extra junk ones. You at least can get a few higher grade drops. It really helps for races because some of them are just impossible to get the highest reward without higher grade stuff. Otherwise your lack speed/acceleration to even get the gold or the throw/slam to take the ball from an opponent or get the ball into the goal.

As for the whole ball games, races, and timed mumbo jumbo I keep typing about. I give you a sort of list of missions & side quests.
1) The ball throwing missions come in two types. A player vs AI or player + AI vs AI + AI or solo get ball to goal on some point on the map. (A goal is always a small little square on the wall so you have to have a good character setup & some skills in aiming). The Verus style matches can be rather fun if perked correctly, but some of the areas are either unbalanced or the AI is just stupidly mapped to follow a path. Sometimes the AI will run to a ball under a ramp/bridge with the ball on top of said ramp/bridge to just sort of circle around. Other crazy things like this happen too so some courses are just super easy when the AI doesn't know how to play. Others you have unbalanced maps, for example in the Sewer world there is a course where the AI's goal is basically ground level while the players goal is three crates up and parked on the left side going up the levels. Your AI misses constantly & can't always make the jump while balls fall all over the course leaving you all on your own.

2) Races consist of two types. Racing an opponent & timed course, You just follow the gates to get ahead and hope you either beat the AI or the clock to get gold rewards.

3) Trick missions are just simple get the multiplier and/or points to win.

4) Security Bot runs. Later in the game you get a mission in which you have to go to a camera to be spotted by security to spawn a Security Bot. You have to go mildly slow on these making sure the bot follows you but not slow enough it catches you. After doing that you drag the bot to a spot on the map to capture it. Once you finish the mission it sort of turns into a side quest from that point on. (At least from as far as I have gotten in the game).

5) Spray paint points. There are areas on the map that have graffiti on them. Find the point and spray over it. You get experience for each one. Each section of a world map has a counter of how many there are in that area.

6) Breaking signs side quests. Each area has a select ammount of signs in the world map. Break all the signs to complete a section. All you do is build up speed and just run into them.

7) Catch AI runs. These are both missions and side quests. All you do is build up speed and ram the AI X amount of times needed to catch them. (From what I played it is three times). The missions are pretty much catch X amount of AI that spawn at the start and the side quests are just a random AI spawns on the map to catch in select locations.

7) Bug Bot races which aren't missions, but timed courses at best. You go around the map finding the hidden bug bots and running into them. Once you hit them they fly away to another point that you must get to & hit them before they go back to their original spawn. After you hit them so many times listed on the screen you sort of collect them for experience.
---------

Online play in my experience seems pointless. When you set the game to online mode (as it seems to default on friends only) you are in one of the wold maps with random people. However, go to another area world map and load into a new room of random people. Plus random people from my experience don't tend to want to even do missions together if it's even possible. (I haven't got any buddies that bought this game so can't comment on if it's broken or not).

View PC info
This is a title I've had my eye on and will almost certainly be picking up in the near future, once I have the time and disposable cash to dedicate to it.
0 Likes

View PC info
stylish, I like it...
0 Likes
While you're here, please consider supporting GamingOnLinux on: