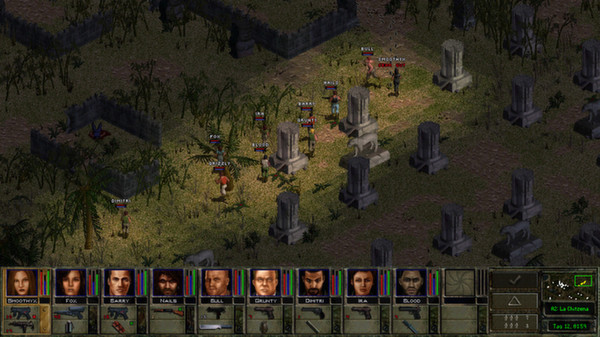 Topware Interactive are continuing to bring over their older games to Linux using Wine, and that's okay. The latest is Jagged Alliance 2 - Wildfire [Steam].

How to get access?
Go to the games properties, go into the beta menu and enter the password "ja2wflinuxtestbeta" and then select the "Linux Beta Test" branch.

I've seen a few reports that it doesn't download for some people, so you may want to hold off until the initial kinks are sorted.

About the game (Official)
An exciting mix of strategy and role-playing that puts you in charge of a nation's fight for freedom. Your objectives are - to hire a core group of skilled professionals through A.I.M., the Association of International Mercenaries; to win the local population over to your side by displaying courage and loyalty; to train your men around the clock and then send them into dangerous missions and lethal fire fights and to conquer the depths of underground mines, reap their riches and discover their secrets. Each success will bring you closer to total victory, while each failure must be overcome with iron determination. Sometimes a tactical withdrawal can bring you more benefits than a battle for battle's sake. Retreat from one sector only to surprise the enemy by attacking on another flank. At the beginning, some of your enemy's bases may seem to be impregnable - but don't despair - you will have to become stronger step by step and slowly gain ground. Article taken from GamingOnLinux.com.
Tags: Beta, RPG, Steam, Strategy, Wine
0 Likes
We do often include affiliate links to earn us some pennies. We are currently affiliated with GOG and Humble Store. See more here.
About the author - Liam Dawe

They did, in some countries. My physical Polish copy of JA2 still has Topware logo on it :)

But at the moment, several different entities own the rights to Jagged Alliance games.
0 Likes

sobkas 16 Oct, 2016
View PC info
So how does steam version compares with ja2-stracciatella?
1 Likes, Who?

gojul 16 Oct, 2016
View PC info
For me Enslaved "port" does not work at all, however their previous game works like a charm. A Wine port for very old games is still better than nothing.
1 Likes, Who?

View PC info
Worth add, we have also other WINE port from TopWare - is called Battle vs Chess https://t.co/6gMVX3HOtG
0 Likes

Quoting: GuestActually it's not okay. The JA source code is available. Heck, it's posted on GitHub! So what Topware is saying is, "We won't make a Linux game with the source code we have. But pay us money for our Windows game."

So the source code is available, so what? The point is, it's an older game so efficiency doesn't matter that much--it won't be putting stress on modern hardware even if Wine adds some overhead, so big whoop--let 'em "port" it that way if it's easier. As long as we can play it on Linux and buy it as a Linux sale, there's no downside. And if their cost of doing it is lower, that means the result doesn't have to sell as much to make a profit and they're more likely to do the same for more titles than if they had to spend the money doing a real port of an old game, probably not written well for cross-platform so a pain to port, the results of which won't sell much (because it's an old game).
The perfect is the enemy of the good, man.
0 Likes
While you're here, please consider supporting GamingOnLinux on: