Love your adventure games? It seems KING Art Games are developing a new one called Shakes & Fidget which is on Kickstarter.

King Art previously developed The Book of Unwritten Tales, The Dwarves, Battle Worlds: Kronos and more. They have a good history of Linux support and it seems this will be no different. 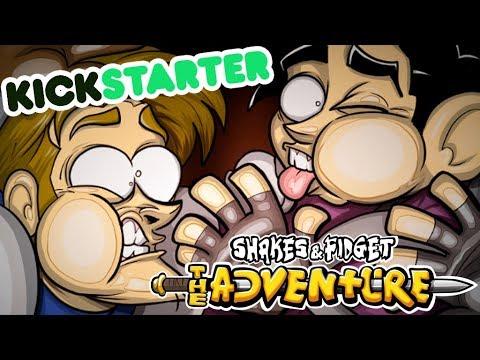 What's weird, is that King Art themselves have linked to it, they also have the trailer on their YouTube so it is official, yet the Kickstarter for it was created by Playa Games GmbH. So they seem to have teamed up for this one.

In the official FAQ, Linux is noted as a release platform:

Our first target plattforms will be PC, Mac and Linux. […]

Shakes & Fidget – The Adventure is all about silly fun. We are not "Citizen Kane", we are "The Naked Gun meets Spaceballs".

We love crazy point & click adventure games like "Day of the Tentacle" or "Sam & Max", with demented characters, hair-raising stories and whacky puzzles.

Great cartoon-style graphics by Shakes & Fidget creator Marvin Clifford and tons of 2D animations to feast your eyes upon. And for your audio enjoyment only the best voice actors and an orchestral score!

Will you be backing it, or will you be waiting until the release? I must admit, this one does look and sounds pretty good. Looks like my kind of humour too, so it will be awesome to see it on Linux.

Thanks for the tip Bumadar!

MarcoDePollo 13 Oct, 2017
View PC info
On the origin of Shakes & Fidget (the only link I could find for the old comic, original in german)

Bumadar 13 Oct, 2017
this was the mail I got from the Book Of Unwritten Tales 2 Kickstarter:

A few minutes ago we launched our new Kickstarter campaign. It’s for a classic point-and-click adventure game, set in a crazy fantasy world. No, it’s not The Book of Unwritten Tales 3.

It’s for an adventure game based on one of the inspirations for BoUT, Shakes & Fidget.

Go to the Shakes & Fidget – The Adventure Kickstarter campaign

Many people asked us when we’d be making The Book of Unwritten Tales 3.

Truth is we’d love to make BoUT3, but point-and-click adventure games are in a tough spot right now. Not many publishers are willing to invest in a classic adventure game and we wouldn’t want BoUT3 to be a cheap knock-off.

The "Shakes & Fidget – The Adventure" campaign is an important test for us. If it’s successful we’re not only going to make a great Shakes & Fidget game, we’ll also be able to use this success as a starting point to take up talks about BoUT3 with publishers again.

Please support the Shakes & Fidget campaign if you can and let others know about it.

View PC info
If I weren't broke I'd totally back this. :P As Liam said, they have a good Linux track record, and well worth supporting.
0 Likes

Quoting: Bumadarthis was the mail I got from the Book Of Unwritten Tales 2 Kickstarter:

(...)
Truth is we’d love to make BoUT3, but point-and-click adventure games are in a tough spot right now. Not many publishers are willing to invest in a classic adventure game and we wouldn’t want BoUT3 to be a cheap knock-off.

The "Shakes & Fidget – The Adventure" campaign is an important test for us. If it’s successful we’re not only going to make a great Shakes & Fidget game, we’ll also be able to use this success as a starting point to take up talks about BoUT3 with publishers again.
(...)

I hope it will succeed then, as I'd love to play BOUT3!
0 Likes

I’m not sure if it happened on every distro, but for me The Book of Unwritten Tales crashed when I tried to open the options, and they never fixed it. So I’m not going to buy anything else they make…
0 Likes
chepati 13 Oct, 2017
View PC info
I love King Art Games. Of course I backed them up.

Check this jewel from the FAQ:

Will it be a Free-To-Play game?
No.
It will be a normal game you can buy. You pay once and you can play it as often as you like, without paying again. You can sell your physical version, if you want to.
There will be no kind of in-game payments, loot boxes or DLCs in this game.

They get it. This is how a real game developer should treat their supporters/fans.

I once sent them an email, pledging my support for *all* of their games as long as they have a day 1 linux release. So, I just put my money where my mouth is.
0 Likes

View PC info
I couldn't resist and back them up, Hopefully they will reach their goal.
It has a medieval,WoW theme and one of the main character is a Warrior + Click and play adventure game with a lot of humour.( If you read their comics you will understand.)
0 Likes
1/2»
While you're here, please consider supporting GamingOnLinux on: