It's true that the marketing around SteamOS and Steam Machines wasn't all that great, but what they're showing as "Optimized for Steam Machines" is a bit of a joke. As noticed on reddit.

On the Steam Hardware page is a scrolling list of banner advertisements for games that are supposed to work well with a Steam Machine or a Steam Controller. The problem, it seems Valve haven't really done their homework for one of them. 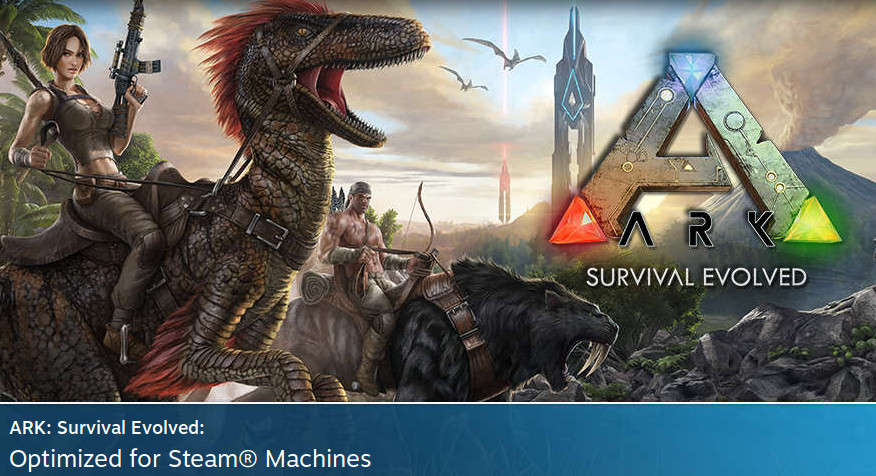 Optimized? Sure it is…

ARK: Survival Evolved shows up as "Optimized for Steam Machines", which to me is pretty insane.

The game has always been pretty terrible on Linux. The list of issues with the Linux version of ARK is pretty long and the developers don't really seem to care at all about the Linux version. They never seem to comment or even acknowledge any Linux bug reports. Want to see an example of a good list of issues? This review nails it. From personal experience, I've experienced nearly all the issues listed in that review, as I know many others have too.

It goes to show how out of touch Valve actually are with the marketing of their own ideas. Advertising a game that has a pretty poor Linux version will only do one thing — continue making SteamOS and Steam Machines look bad. Remember how a lot of tech sites reported on the lower performance of games on SteamOS compared with Windows? Stuff like this really doesn't help.

If Valve ever want SteamOS and Steam Machines to be taken seriously, now or in future, they really need to up their game on things like this. I understand why they did it, since it's big and popular and they needed those titles to sit along side Steam Machine advertisements, but it's still a damn poor choice.

I've grown more impatient to see what Valve will be doing with SteamOS over time. I've honestly defended it too many times. Unless Valve really start pushing the boat out for it, SteamOS and Steam Machines will fade away without anyone really caring. Thankfully Linux gaming as a whole is doing pretty damn well, just not what we all originally hoped for.

tuxintuxedo 11 Sep, 2017
View PC info
This really seems like a joke. Someone should open a bug report to Steam about this, so they at least notice it.
2 Likes, Who?
Przemko 11 Sep, 2017
If Valve wan't to make Steam OS serious operating system ans steam machines seriuous console replacement they should make or pay someone to make some good games only for linux.
2 Likes, Who?
Blaster-PR 11 Sep, 2017

Quoting: tuxintuxedoThis really seems like a joke. Someone should open a bug report to Steam about this, so they at least notice it.

const 11 Sep, 2017
View PC info
This page is there since the SteamMachine pre-release campaign.

Do we really need this kind of discussion every 2 weeks? Valve stopped the SteamMachine campaign as much as possible without actively killing it. This is obvious. It's still investing in linux gaming, maybe fearing MS converting Windows in a walled garden. They are doing maintainance work and push projects like vulkan that may still need a while to give fruits.
When everything is in place, they might try another time. Having learned from their mistakes. Or this situation stays, proving to be holding back MS. Or they might go all in with Steam on Linux in general, start a big campaign, pay for ports, drop collectables for Linux users, add an exclusive free game section, publish linux exclusives. That would mean war.
That's probably what most of us here hope for, but do you think the homework for this is done?

Also: You could maybe have added a reference to the reddit-article that inspired you. https://www.reddit.com/r/linux_gaming/comments/6z9hwu/its_interesting_to_see_what_valve_promotes_as/
8 Likes, Who?

Quoting: constThis page is there since the SteamMachine pre-release campaign.

I am aware of that, doesn't change a thing.


Quoting: constDo we really need this kind of discussion every 2 weeks?

That's a massive overstatement and you know it. The last article specifically about SteamOS was Early in July. And I think it's important to highlight issues, not bury our heads in the sand about what's happening.


QuoteAlso: You could maybe have added a reference to the reddit-article that inspired you. https://www.reddit.com/r/linux_gaming/comments/6z9hwu/its_interesting_to_see_what_valve_promotes_as/

That was supposed to be there, I've re-added it. Seems when moving it from gdocs to here I accidentally cut it out.
4 Likes, Who?

View PC info
Also remember, marketing campaigns more often than not include products of companies that co-sponsored the campaign. In other words, it may be that some cash changed hands for this to be promoted. And marketing people care more about cash then they care about technical merits.

Obviously, I do not know for sure, but that is my first thought when I see something like this happen.
0 Likes

View PC info
Has anyone on here actually tested it on a steam machine? Just wondering.
2 Likes, Who?

View PC info
Actually, we all knew it.
SteamOS/Linux just saw the light of day to put some pressure on MS.
It's still there, in a more or less passionless state, ready to be (kind of) revived when needed.

If you want it from someone who has worked for and with Valve and whom I consider a very clever mind:

View PC info
It's said that for at least two years. A steam discussion thread I replied to in 2015 about this exact claim came back life today as well.
0 Likes
Purple Pudding 11 Sep, 2017
I'm sad about it, Ark seemed to be a great game. I don't own it yet, I'll wait, for Ark or for another great game with dinosaurs (can you suggest me one beside the old but great Jurassic Park Operation Genesis, which is probably playable on Wine?).

QuoteIn the future, the community will create a playable version of "Ark: Survival Evolved" from its ruins, teaching children about those people who wanted to play the game so bad that they created real dinosaurs to avoid the issues of the game.

Quote from the Book of GOL Prophecies.

BTW, how about a "bugs/glitches hunt" livestream? If we have issues, gotta catch'em all!
2 Likes, Who?
1/4»
While you're here, please consider supporting GamingOnLinux on: