Disclosure: Key provided for me. 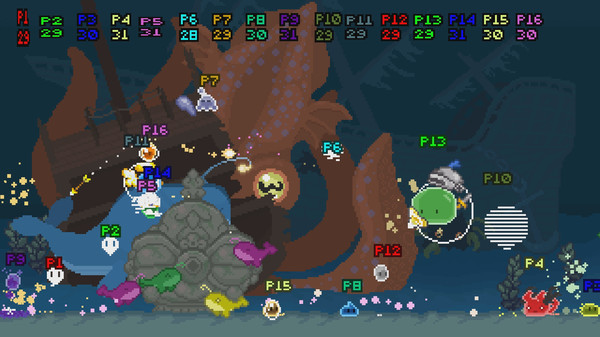 Firstly, the gamepad support isn't great. For me, it required a manual setup to set bindings unlike the majority of games where a gamepad is detected and they just work. On top of that, you're forced to use the DPAD, as the left stick registers as multiple inputs making it impossible to set up. It also didn't seem to save the bindings I set properly, requiring multiple attempts to get the inputs actually saved. Eventually it saved my bindings for the Steam Controller so I could try it properly.

The next point that was disappointing, is that there's absolutely no single-player. It has local multiplayer or online multiplayer, there's no AI so unless you have friends around or you manage to hook people into playing online, you're out of luck. This is especially sad as it's seemingly not been a hit, so there's practically no one playing online.

As for the actual gameplay, for something that should be manic and fun, it all feels sluggish and slow to the point where it's just not fun to play. The slimes don't have tight controls, they feel like they're floating around and for an action game that's supposed to be competitive—that's extremely poor design.

You can find Super Slime Arena on Steam. I wouldn't recommend it, you would be much better off getting Move or Die which is not only cheaper, but it also has AI as well as online play and local multiplayer and it's truly hilarious.