Disclosure: Key provided to me by GOG.

No, this really isn’t about the rather good TV series that shares the same name. Black Mirror, for those that don’t already know, is actually a reboot of a popular trilogy released a few years ago. Unlike a lot of people, I never played the original Black Mirror series, so nothing about this has been spoiled for me.

Here’s a gameplay video of the first ~30 minutes. Obviously spoilers, since it is a story-based game: 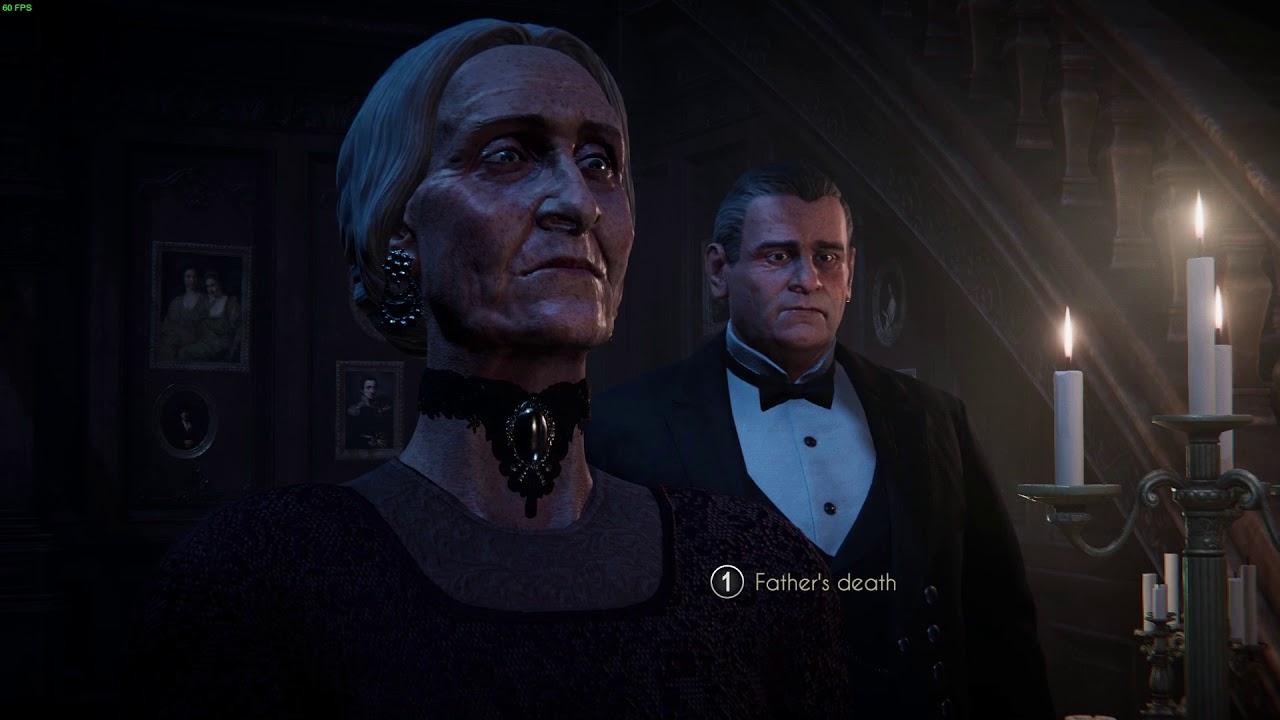 Note: I cut away a bunch of the pure black loading screens, to smoothen it out a bit.

As always, I aim to not spoil too much for you, so I will leave the majority of the story out and give some general thoughts on it.

Black Mirror revolves around the Gordon family, owners of an old and rather worn-out castle in Scotland and their rather dark history. You play as David Gordon, who has arrived from India after receiving word of his father’s death. You very quickly get a sense that things aren’t right at all and things are being hidden from you, what exactly is for you to find out and hopefully not lose your mind in the process.

As far as introductions go, Black Mirror is certainly exciting! A little short perhaps, but it was successful in really pulling me in. It left so many questions in my mind about just what the hell is going on. It was absolutely frantic and gave a real sense of panic, the great voice acting really hit the mark here too. The rest of the game is a lot slower though, with a fair amount of backtracking as you attempt to figure it all out.

Graphically, it’s highly detailed and when you get a decent look in the light, it’s really quite fantastic. They’ve nailed the style and the eeriness of it, resulting in an atmosphere which really helps keep you on your toes. However, there are a few graphical glitches here and there like lines around objects, certain items flickering and so on. It’s not too detracting, but it needs a little polishing. As for the characters, they are pretty damn good and some are brilliantly detailed in the face, apart from the dead-looking eyes you get now and then and some questionable lip syncing.

The controls are more than a little on the clunky side with mouse and keyboard, even for a point & click which aren’t always the smoothest. In the case of Black Mirror, lining up to actually interact with something ends up being quite a nuisance. There’s been many times of me doing a little dance to align with objects or people, which really was frustrating. 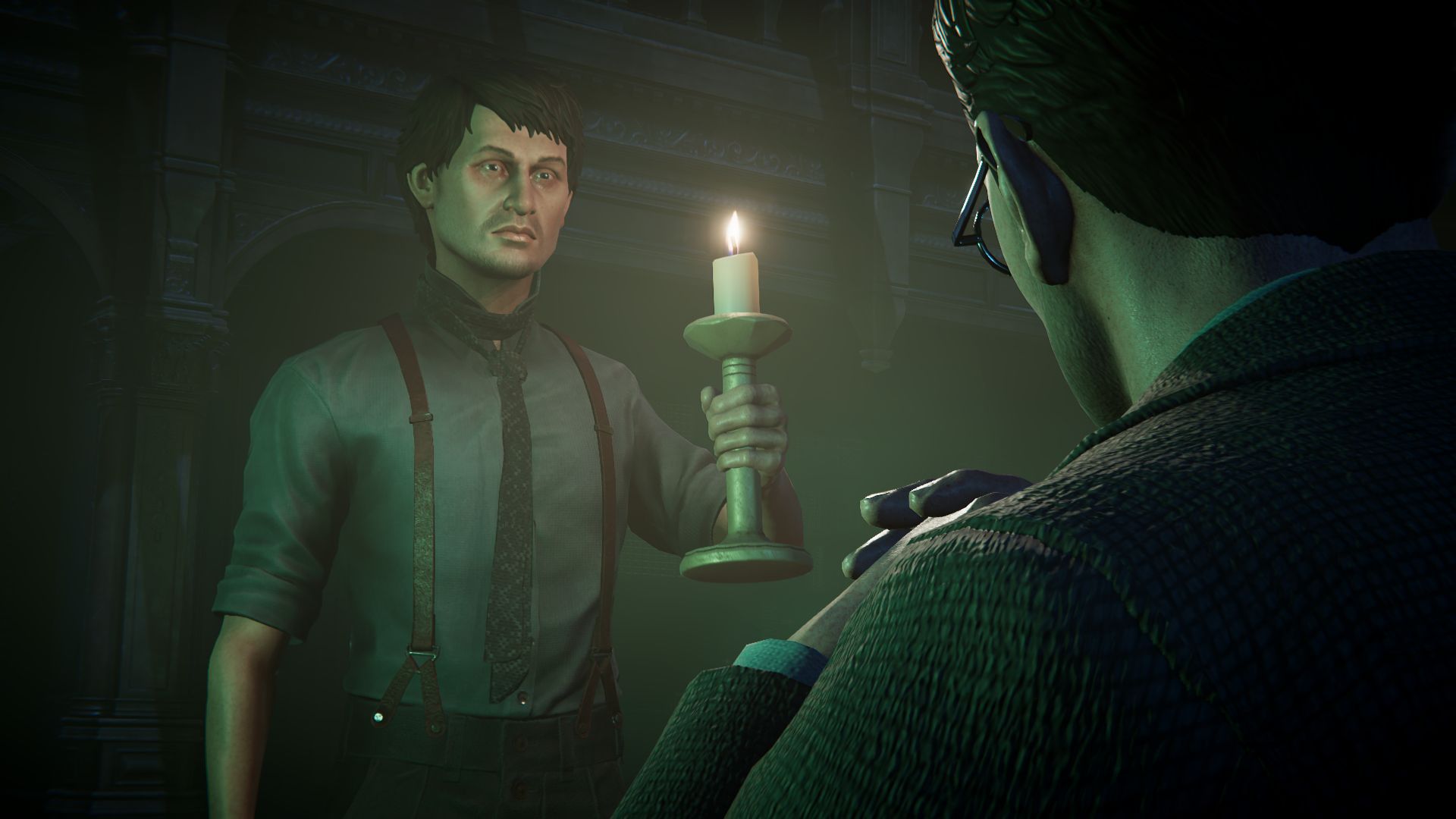 The camera is also a little crap to control, I often move the mouse away from the screen since the bright white system cursor looks completely out of place being shown all the time, especially during cutscenes, but then when you take back control the camera will instantly move to wherever you put the mouse.

It actually feels better to control with the Steam Controller, not amazing by any stretch, but not such a fight as it is with a mouse and keyboard. Strange that a “point and click” is better with a gamepad though, likely designed heavily towards consoles.

Performance wise, it’s mostly okay with a few drops here and there, but it has largely been quite smooth.

Overall, the story is rather interesting, the graphics are great, the voice acting is absolutely top notch, but it’s let down by the poor character and camera controls (unless you use a gamepad). If you do enjoy point & click games, with a sprinkle of puzzles and minor horror elements, then by all means give it a go.

You can find Black Mirror on GOG, Steam & Humble Store (Steam key only). Thanks again to GOG for the key.

We do often include affiliate links to earn us some pennies. We are currently affiliated with GOG and Humble Store. See more here.
About the author - Liam Dawe
I am the owner of GamingOnLinux. After discovering Linux back in the days of Mandrake in 2003, I constantly came back to check on the progress of Linux until Ubuntu appeared on the scene and it helped me to really love it. You can reach me easily by emailing GamingOnLinux directly.
See more from me
Some you may have missed, popular articles from the last month:
The comments on this article are closed.
12 comments
Page: 1/2»
Zlopez 30 Nov, 2017

I didn't know there will be a reboot of the trilogy. I played all the games from original trilogy and I'm glad there will be something new in this world.

BTW: I never heard about the TV serie.
3 Likes, Who?

Quoting: ZlopezI didn't know there will be a reboot of the trilogy. I played all the games from original trilogy and I'm glad there will be something new in this world.

BTW: I never heard about the TV serie.

Pretty much exactly what I was going to say. I loved this series back in the day and I look forward to a reboot with modern tech. A lot has changed since the early/mid 2000s.I will definitely be getting this soon.
0 Likes

Eike 30 Nov, 2017
View PC info
It seems quite some Steam reviews are negative due to the controls. :-(
I hope they improve them, I was looking forward to playing this!
0 Likes

Quoting: ZlopezBTW: I never heard about the TV serie.

Completely off topic now, but watch it. It's a fantastic series, with each episode being a completely different story.
2 Likes, Who?

View PC info
Italian reviews I read says the game needed a lot of polishing. A reviewer suspected the game had a rushed release to avoid missing the Christmas sales window. I watched some videos showing severe FPS drops here and there, under Windows. That seems in line with what Liam tells in his review. Not owning the game, I can't judge about the story, but the atmosphere seems great. Let's hope developers address all the problems in future patches, meanwhile the game goes straight into my wishlist...

That said, I'm actually playing "Agatha Christie: The ABC murders" and I find it very enjoyable. It's a little bit too linear and slow paced, but all in all has a certain retrò atmosphere that's catchy. Bought for less than 4€ in the last Gog sale and absolutely recommend it to all the point&click fans ;)
1 Likes, Who?
Zlopez 30 Nov, 2017

Quoting: ZlopezBTW: I never heard about the TV serie.

Completely off topic now, but watch it. It's a fantastic series, with each episode being a completely different story.

This looks like something I could like. The last TV serie I really liked was The Outer Limits, mainly because every episode was completely different.
0 Likes

I bought it at release but got a refund because the mouse pointer was sluggish (and the framerate in general too). Has it been fixed?

Quoting: stanI bought it at release but got a refund because the mouse pointer was sluggish (and the framerate in general too). Has it been fixed?

I had this with some adventure games due to my gaming mouse. Found a fix somewhere in the Steam forums. Maybe it's the same for you and this game?
0 Likes

I bought it at release but got a refund because the mouse pointer was sluggish (and the framerate in general too). Has it been fixed?

No, I still have sluggish mouse and low framerates, but that don't impact playability for me. The Gog version of the game is 1.0.2 released 6 august 2016

But I have to say that nearly all Unity 3D based games have poor performances on my system.

Quoting: EikeI had this with some adventure games due to my gaming mouse. Found a fix somewhere in the Steam forums. Maybe it's the same for you and this game?

I suppose it’s not impossible, but it’s the only game out of hundreds with that issue for me. I have a Roccat Savu, not sure at which Hz setting it’s running. If I ever set it, I probably set 125Hz (whatever the lowest is) because I don’t see the point of high polling rates :).

Quoting: ziabiceNo, I still have sluggish mouse and low framerates, but that don't impact playability for me.

Ok, thanks for confirming.
0 Likes
1/2»
While you're here, please consider supporting GamingOnLinux on: