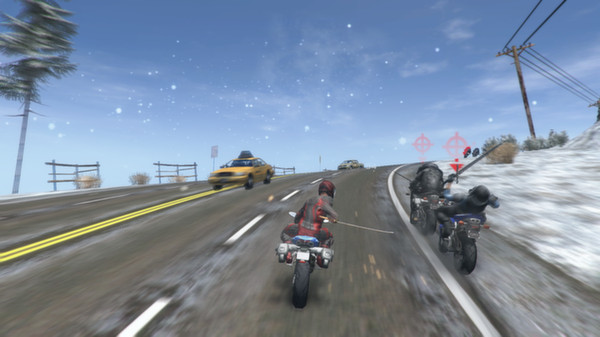 Road Redemption [Steam], the bike racing and combat game inspired by Road Rash has a massive update, but the Linux version is currently behind.

The developers said a few days ago they would like to put the new Linux build out that day, but it seems that didn't happen. Hopefully we won't be left waiting too long, since on Arch the game on the current version doesn't even load for me.

Here's some highlights of what's new:

You can find the full update notes spread across here and also here.

View PC info
Luckily, I've got enough other Linux games to keep me content until this gets sorted. Heck, truth be told, I haven't even installed my copy of Road Redemption yet. Linux Lateness is simply a Law of Nature (admittedly, a little known and suspiciously selective one) that determines the release dates of Linux games. I don't remember the details, but the formula involves the amount of entropy in the developer's trousers, or something.

Anyway, thanks for the heads-up, Liam. Please do let us know when they do release the update, yeah? Thanks!
0 Likes

View PC info
I'm waiting for it to come out DRM-free.
0 Likes

elmapul 3 Apr, 2017
View PC info
" Hopefully we won't be left waiting too long, since on Arch the game on the current version doesn't even load for me."
irony?
0 Likes

Quoting: ShmerlI'm waiting for it to come out DRM-free.

Shmerl in every GOL thread/article ever. It's now an axiom.
0 Likes

View PC info
@Luke_Nukem: Only if the game is still not out DRM-free, and I'm interested in it. Otherwise, why should I care? :D
0 Likes

mixedCase 4 Apr, 2017
View PC info
Update is now out for Linux. Some graphical artifacts.
0 Likes
While you're here, please consider supporting GamingOnLinux on: