Serious Sam 4 is going to come to Linux!

Serious Sam 4 has been confirmed to me by the developers that it will come to Linux and won't be a delayed release! 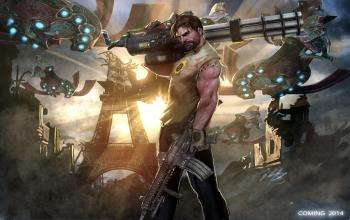 QuoteCroteam
Hello Liam! Thanks! Yes, our plan is to have SS4 Linux released simultaneously with Windows.

Update: When asking about Steam, they confirmed it will require Steam.

QuoteGame will use Steamworks and as far as I know, it should be distributed via Steam and other digital distributors that want to offer it.

Update #2! When asking about the other Serious Sam games:

QuoteCurrent situation is that our new Serious Engine 3.5 works on Linux, while HD games are on older 3.0 which lacks Linux support (Alen explained more here: http://steamcommunity.com/app/221410/discussions/0/882965737329387238/). SS2 works on even older tech. What is realistic is that once SS4 is out, HD also gets Linux on or after release, while SS2 gets Linux if we execute the idea on doing a SS2 remake (currently just in early design stage aka I am only one working on that project atm  ;), where remake would be on Linux.
There are existing Linux beta versions of Classics and SS2, but as far as I recall, there were issues with Gamespy, so that's out of our plans.
Roman

So not only are they using all the funds from their Humble Weekly Sale towards funding Serious Sam 4 but it will be on Linux and be a same day release for us! How do you like them apples?!

QuoteAll funds to Croteam will go towards making the upcomingSerious Sam 4 the craziest and greatest Serious Sam game EVER.

So it may be a good time to throw some extra bucks their way on the weekly sale to help fund it and be sure to spread the word!

PS: If you guys that made Bioshock don't want our money, there is no problem. Valve and Croteam can have it all.
0 Likes
Mike Frett 9 Jun, 2013

SS3 required quite a bit of power to run, reviews weren't that great either. I bought the game on Steam while it was on sale a few months ago and wasn't impressed by the game-play. And something about these 'new' FPS Games just give me, literally, a headache.

While I probably won't buy anymore new SS games, I rather enjoyed SS2 and I think it's too bad they missed a great opportunity to bring it to Linux, especially since there use to be a native port.
0 Likes

well SS games is simply about 1-liners and more mobs then you can count and just as you thought you had it you get even more mobs. Its just totally overdone which makes it simply fun.
0 Likes

View PC info
Bumadar has it right on, I think it's nice as we have a lot of faced paced shooters but the fact that SS has a single player with a story and co-op is just fantastic. Give me a decent single player over multiplayer anyday.
0 Likes
Anonymous 9 Jun, 2013

Quoting: Mike FrettSS3 required quite a bit of power to run, reviews weren't that great either. I bought the game on Steam while it was on sale a few months ago and wasn't impressed by the game-play. And something about these 'new' FPS Games just give me, literally, a headache.

While I probably won't buy anymore new SS games, I rather enjoyed SS2 and I think it's too bad they missed a great opportunity to bring it to Linux, especially since there use to be a native port.

Have you tried turing off the motionblur? That seems to be one of those "features" that are headache inducing and make the game look like they are run one one of those old flatscreens with a too low refresh rate.
It's usually the first thing I turn off... helps a bit with performance too by the way ;)
0 Likes
Mike Frett 9 Jun, 2013

heh, don't take me out of context. As I said, I absolutely loved SS2 The Second Encounter, especially Co-Op; and it didn't make my head sick. Incidentally, after a little research after posting, seems a lot of these new games are making people ill. Something to do with the sharp textures and bloom or whatever.

Yes Liam, I agree that Single Player is important, so important to me that I won't buy Multiplier only games, Single Player is something a lot of new AAA games choose not to add. I mean hey, I'm just as much a Games on Linux supporter as any of you, and I never implied that Croteam shouldn't release Games for Linux; the more the merrier I say.

Edit: Yes Anon, your right. And I'll try that ASAP.
0 Likes
Anonymous 9 Jun, 2013
I was able to install serious sam first and second encounter natively from the humble bundle using the old beta linux installers. I just made the files into an iso and then mounted it like a cd and ran the installer and it worked. So I have the first two serious sam games running natively. It looks like it should work for serious sam 2 from steam as well using a different method. I did get it installed outside the bundle because I happen to still have the disks and they installed just fine. So at the moment I have serious sam first and second encounter, serious sam 2 and serious sam 3 all native in linux. I even added them all to steam with the icons and everything so I can have all of the games in one spot.
0 Likes

I didn't realize that old SS games could be played on Linux. I'm adding them to the sales page while the Humble Weekly Sale is on!
0 Likes
1/3»
While you're here, please consider supporting GamingOnLinux on: