Shock Tactics looks like it mixes Civilization with XCOM, can't wait to play it on Linux

By Liam Dawe - 25 April 2016 at 7:52 pm UTC | Views: 7,601
Well now, Shock Tactics was emailed in by a reader and it has to be one of the most interesting games I've seen recently. It seems to blend aspects of Civilization with XCOM! 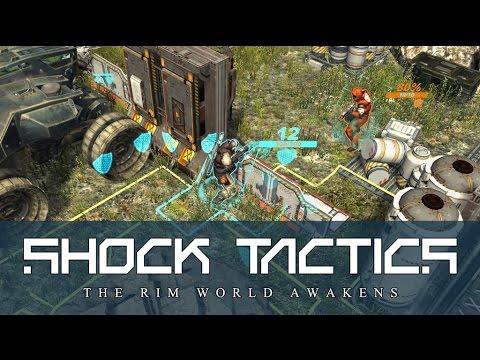 What do you think folks? Looks good doesn't it!

They don't have an exact release in mind yet, but they are stating it will be "Late 2016".

About the game
Shock Tactics is a single player turn-based sci-fi strategy game with tactical combat, exploration, squad management and base building. It is inspired by the space western style of Firefly and games like Jagged Alliance and X-COM.

You are a trailblazer for the first wave of the free Space Pioneers that are exploring an ancient alien homeworld. In their century old struggle with the dictatorship of the Imperial Consortium, this planet is the first real hope of finding a new home for their people. Article taken from GamingOnLinux.com.
Tags: Strategy, Upcoming
0 Likes
Share

We do often include affiliate links to earn us some pennies. We are currently affiliated with GOG and Humble Store. See more here.
About the author - Liam Dawe
I am the owner of GamingOnLinux. After discovering Linux back in the days of Mandrake in 2003, I constantly came back to check on the progress of Linux until Ubuntu appeared on the scene and it helped me to really love it. You can reach me easily by emailing GamingOnLinux directly.
See more from me
Some you may have missed, popular articles from the last month:
The comments on this article are closed.
7 comments
chris200x9 25 Apr, 2016
Looks amazing!

Edit: I hope also they have mod support even if it's only for character customization, that's probably one of the best parts of xcom 2. Also I hope they let you give characters bios so you can role play a little bit.

View PC info
This is surely something I will keep an eye on.
A civ game with xcom combat! :D
1 Likes, Who?

View PC info
What a great idea! I'm not a fan of the flavour text, which seems a puerile to me, but the blink, Frozen Cortex-like movement and the merger of Civ and XCom looks like something I will have to try! :D
1 Likes, Who?

Mountain Man 26 Apr, 2016
View PC info
Inspired by XCOM? Looks more like a direct ripoff if you ask me.

View PC info
seems like a great idea, I like both games a lot, so I'll definitely keep an eye on it.
0 Likes

View PC info
Looks like I should buy this game....
0 Likes
While you're here, please consider supporting GamingOnLinux on: