The developers of Strike Suit Zero tweeted to us to let everyone know that the game is now out of beta and anyone can now purchase it and play. 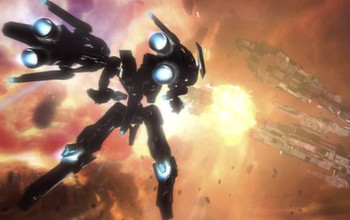 @gamingonlinux Linux version of Strike Suit Zero is now live on Steam. Just a heads up!

They stated the Linux icon should hopefully come today as well to show off the fact that it's now on Linux officially.

@gamingonlinux we're aware of this and it should be added later today, with any luck.

The developers also noted to us that yes, the DLC does work on the Linux version.

We do often include affiliate links to earn us some pennies. We are currently affiliated with GOG and Humble Store. See more here.
About the author - Liam Dawe
I am the owner of GamingOnLinux. After discovering Linux back in the days of Mandrake in 2003, I constantly came back to check on the progress of Linux until Ubuntu appeared on the scene and it helped me to really love it. You can reach me easily by emailing GamingOnLinux directly.
See more from me
Some you may have missed, popular articles from the last month:
The comments on this article are closed.
10 comments
abelthorne 9 Aug, 2013
Do you know if Strike Suite Infinity is planned on Linux too?

(I already asked in the article about the beta but I guess my question is better here.)

Liam Dawe 9 Aug, 2013
View PC info
Currently it's not happening no.
0 Likes
tweakedenigma 9 Aug, 2013
According to a dev in Steam Forum it looks like SSI might be coming to Linux:

Awesome! =) Me and my bro have this, he's going to be thrilled when I tell him. Now I'm waiting for Worms to show up in my Linux list ready for d/l. ;)
0 Likes
Ivancillo 9 Aug, 2013
Will this game be avaliable outside Steam?

If this game hits Humble Bundle, will require Steam to activate and play too?

Have the develoupers considered Desura?
0 Likes
Valczir 10 Aug, 2013
Dangit.  The game seems fun so far, but I have one major issue: I identify more with the colonials than the UNE.  I actually can't play the game, because I'm more interested in killing my teammates than my enemies, and am actually more satisfied when I fail a mission than when I succeed.

Ah, well.  I guess these are the dangers of being a cynical old man with no faith in humanity - story based games often pit me against my own ideals.
0 Likes
Linas 10 Aug, 2013
This is awesome! I was afraid that the game will not run on NVIDIA GeForce GT 330M with only 512 MB video memory. But it runs great even with high settings and 1920x1200 resolution, without antialiasing.

Quoting: IvancilloWill this game be avaliable outside Steam?

If this game hits Humble Bundle, will require Steam to activate and play too?

Have the develoupers considered Desura?

The game is also available on other stores (GOG, GamersGate − they don't sell the Linux version though) so the devs are not sticking to Steam per se. They don't sell it through the Humble Store or Desura, maybe they're unaware of these or the conditions don't suit them.
0 Likes

Sabun 11 Aug, 2013
View PC info
SSZ works brilliantly on Ubuntu 13.04! In the options menu, it actually has a setting for multi-monitor mode. I've never seen that option in any other game I've played before. Too bad I don't have an Occulus Rift, I'd like to try it with this game. I did a short video of SSZ running in Ubuntu with maxed out settings at 1080p, runs very well :)
Now, I hope Strike Suit Infinity might come to Linux too as I have that as well.