Sudden Strike 4 updated to add in AI for 'Classic Mode' battles and more, on sale at GOG

Sudden Strike 4 [Steam, GOG] is getting slowly better after each patch, it's good, but it could have been awesome. This new patch continues the improvements. 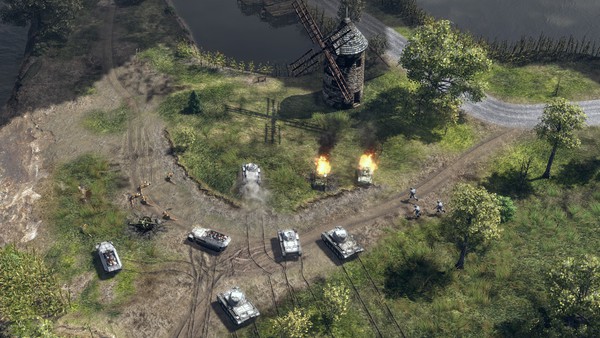 Note: It seems multiplayer is still locked to each platform, with no reply to me from the developer or publisher since release. Sad, but not uncommon.

In the patch released back in September, they added in a classic multiplayer mode like found in Sudden Strike 2. The problem with that, is that it didn't support AI. Today's patch sorts that out, so Linux gamers can now happily play this extra game mode.

On top of that, the patch has also improved multiplayer with connectivity feedback added to the multiplayer lobby, AI improvements, improved flow of the main menu and assorted bug fixes.

It's really good to see them continue to support the game, the single-player was always rather good and intense, but the multiplayer was the real issue. Hopefully they will keep at it, as it's nice to have more games like this available on Linux. Going by their updates, they did note last month that they were planning more campaigns and further updates.

Article taken from GamingOnLinux.com.
Tags: GOG, Steam, Strategy
4 Likes, Who?
We do often include affiliate links to earn us some pennies. We are currently affiliated with GOG, Humble Store and Paradox Interactive. See more here.
About the author - Liam Dawe

I am the owner of GamingOnLinux. After discovering Linux back in the days of Mandrake in 2003, I constantly came back to check on the progress of Linux until Ubuntu appeared on the scene and it helped me to really love it. You can reach me easily by emailing GamingOnLinux directly.
See more from me
Some you may have missed, popular articles from the last month:
The comments on this article are closed.
2 comments
EzyRhino 20 Dec, 2017

QuoteNote: It seems multiplayer is still locked to each platform, with no reply to me from the developer or publisher since release. Sad, but not uncommon.

That's a really big let-down from Kalypso. Another game dev half-assing the linux implementation. They've had plenty of time since launch to fix this (yes, I said fix).
0 Likes

View PC info
Nice to see Kalypso releasing their Linux games on GOG after all. Not properly working multiplayer is probably cased by missing Galaxy libs, but it's way better than no GOG release at all caused by the same reason.


Last edited by Shmerl on 20 December 2017 at 10:17 pm UTC
1 Likes, Who?
While you're here, please consider supporting GamingOnLinux on: