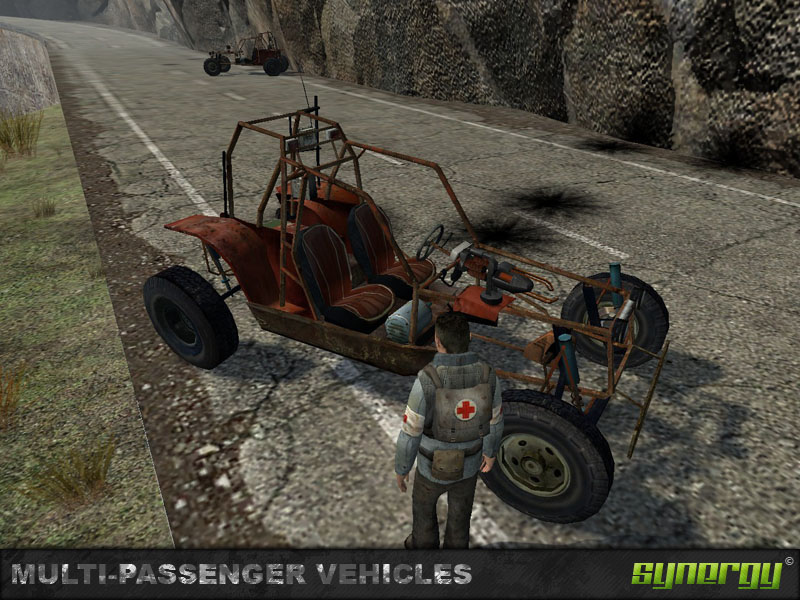 About
Synergy is the Half-Life 2 cooperative modification that enables you to play with others through Half-Life 2 and its episodes (Episode 1 and 2), as well as our own levels.

You may also install other third-party mods, such as MINERVA: Metastasis and ROCK 24, to also play them cooperatively with other players.

Synergy tries to maintain the true Half-Life 2 game-play, while still adding in our own unique ideas.
Synergy About Page

Note: You do need to own Half-Life 2 to play it.

I had low expectations for this mod. I thought this would be a buggy and hacky attempt to integrate co-operative game play into these games. Oh I was wrong.

The developers have done a brilliant job. To install the game simply use the one click install on the Steam store. The number of enemies has been increased to account for the number of human players, adding to the level of difficulty whilst providing a great change to the original game. No command line server configuration is required, setting up and joining a server can be done through the mods UI and steam overlay. We encountered few bugs, and they all occurred at the end of a level, so it just required the restarting of the server at the beginning of the next level. I was able to host, play and web rtc chat with no lag despite my average connection.

I cannot recommend this mod highly enough. Its a fresh new spin on some classic valve games. Hopefully we can convince more third party campaign modders to support Linux! Article taken from GamingOnLinux.com.
Tags: Action, Adventure, Free Game, Steam
0 Likes
We do often include affiliate links to earn us some pennies. We are currently affiliated with GOG, Humble Store and Paradox Interactive. See more here.
Some you may have missed, popular articles from the last month:
The comments on this article are closed.
2 comments

View PC info
Thanks for sharing this mod, Half-Life cooperative is like a dream coming true =D
2 Likes, Who?
Matt w 19 April 2014 at 3:55 am UTC
Oddly enough, I just checked about an hour ago to see if it was available on Linux and it was. I used to run a Synergy server as a hobby. Good fun.
0 Likes