For those who love your traditional roguelikes, you might want to check out Caves of Qud which is now available on GOG and itch.io.

Along with the release on new stores, they just did a big update to the game too which includes generated villages spread throughout the game, each with its own faction, history and so on. A dynamic quest system to go along with that, giving you unique quests for each! Also, you have the option of choosing your starting location now which includes some of the new villages.

It's quite highly rated and I've certainly never heard anyone say a bad word about it. It had been a while since I had played it (2015 in fact!), so I attempted another run at it today. 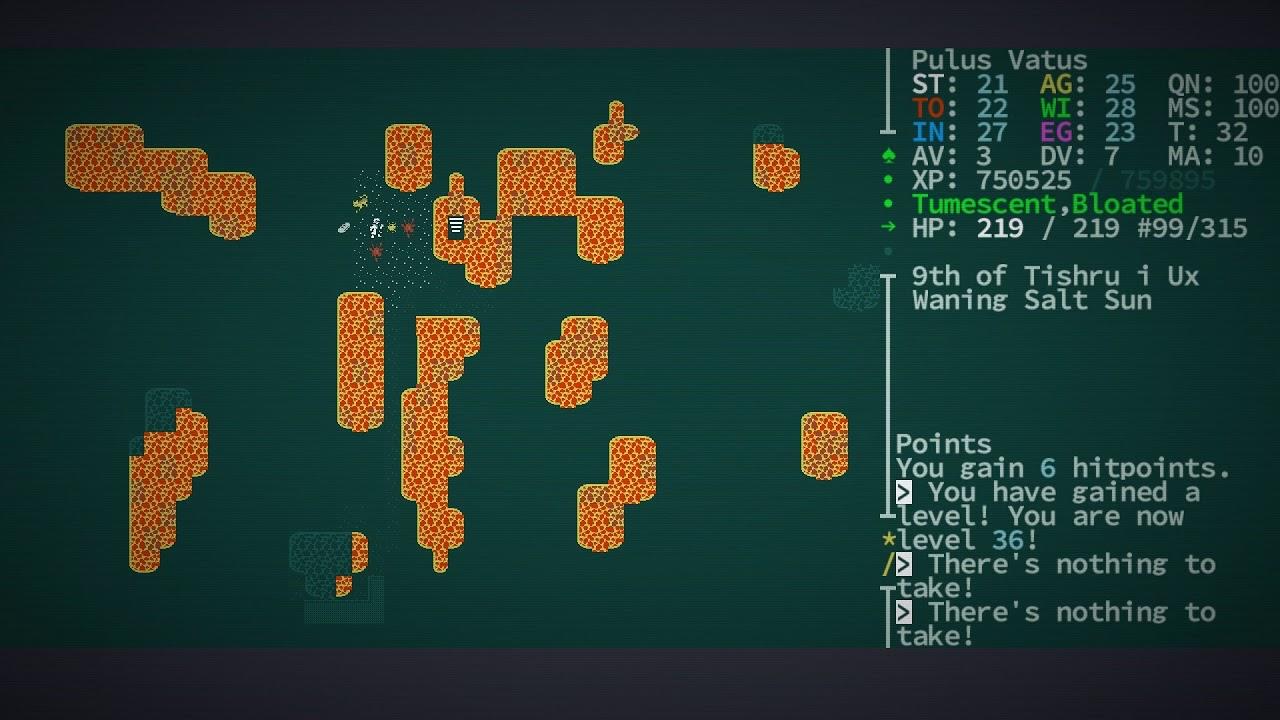 I decided to roll a random character rather than creating my own and it did not disappoint. I was given a Mutated Human Gunslinger, with photosynthetic skin, a stinger with paralysing venom…and narcolepsy (hah!). A fun little feature, is that you can get the game to create a tweet with your character build for others to try out, it's code is "BDMLKLKOBRBYDBDODZED" if this build interests you.

It does initially seem like it's quite hard to get into, but honestly the in-game guide actually does a great job at getting you going. Once you get a few of the keys sorted, it's surprisingly easy to have an amusing time with it.

Naturally, my first attempt didn't last long. I found a chest, opened it and decided all that tasty loot should be mine, especially this random artifact. Suddenly—I'm confused, the world is all warped and all the walls are out of place, someone's started attacking me (presumably the person who's house I'm robbing) and I'm dead.

Okay, let's try again. This time, I'm a friendly face willing to help out and get my name out in the world. What's that? You need help getting rid of some critters eating your crops? Okay…moments later—"You Died. You were killed by a worm of the earth". Well, that was unexpected. And so begins my new addiction to Caves of Qud. A game that will give you an endless amount of stories to tell with tons of content.

While it's been on Steam for a while, GOG as usual is a little later to the party, however it comes with a Linux build right away!

Find Caves of Qud on GOG or itch.io now as well as of today!

It arrived on itch just after we posted the article, it was updated to note this.

Article taken from GamingOnLinux.com.
Tags: DRM-Free, GOG, Itch.io, Roguelike
5 Likes, Who?
We do often include affiliate links to earn us some pennies. We are currently affiliated with GOG, Humble Store and Paradox Interactive. See more information here.
About the author - Liam Dawe

View PC info
Not sure if this genre is for me ;-) I will give it a shot. Just bought it DRM-free on itch.
0 Likes

Quotebrutally difficult and deaths are permanent

That doesn't sound like fun. Where's the joy in playing a massively huge randomly generated world full of fascinating stuff if you die within 5 minutes (by worm)?

View PC info
The game is awesome, but i hate the visuals and the GUI, i cannot play as i'd like to, for some reasons don't really understand. I play(ed) many rogue likes, intensive Dwarf Fortress included since long before z-axis even, but CoQ has something weird, for me, with its GUI mostly...

Luke_NukemThat doesn't sound like fun. Where's the joy in playing a massively huge randomly generated world full of fascinating stuff if you die within 5 minutes (by worm)?

well, if you like, there is option to turn off the permadeath, so you can save your progress, and then if you die, you can just load the last save and continue from there.

also, for those that hate the UI, the current default one will be replaced eventually, progress is going on, and can be already be tested in the options menu.. if will be more graphical, if you are into that, and have mouse controlled interface for inventory etc..

Quotebrutally difficult and deaths are permanent

That doesn't sound like fun. Where's the joy in playing a massively huge randomly generated world full of fascinating stuff if you die within 5 minutes (by worm)?

The fun is in those moments when you are desperately struggling to save yourself from a tricky situation. And although there is a lot of dying at the very start of the game, over time you do become more skilled and consistently start getting further and further. I've played the game for 23 hours and I don't recall a single death being that unfair and my deaths have largely been because I've misjudged an enemy or forgotten to use an item that could have saved me.
2 Likes, Who?