The rather good hack and slash Hammerwatch had a big update recently, great co-op game for Linux

The hack and slash dungeon crawler Hammerwatch gained a rather juice update earlier this month so I went back to take another look. 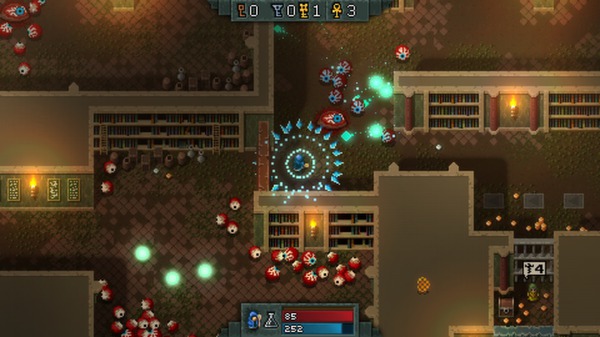 When I had previously tried it, honestly, I was a bit let down by the enemy AI. However, the more I played of it the more I came to appreciate it overall. That's especially true after playing a lot of it in local co-op (it also has online play!) and it's turned into a fantastic experience on Linux.

Hammerwatch 1.4 came out earlier this month, which added in a brand new Sorcerer class along with the option of twin-stick controls which actually feels really fantastic. They also tweaked abilities for other characters to improve them, updated characters visuals and so on.

I held off on writing about it due to a gamepad issue in the menus, which was fixed in another patch yesterday so I'm now more than happy to recommend it. It's good if you're alone and it will be a challenge enough to keep you interested, but if you bring a friend or two along for the ride it's even better.

Works great with a Steam Controller as well as a Logitech F310.

View PC info
Yeah... I don't know. Maybe it's because just as for Blaze Rush I don't do coop or online, but I found this game quite... Meh. :|

I played a bit of this a few years ago. Need to go back again and see what they have added. While it is pretty fun in general, it is definitely better as a co-op game than solo.
0 Likes

View PC info
I love it. It reminds me a bit of a mix of Diablo and Gauntlet (but good). I haven't played it much co-op, though.c
0 Likes

View PC info
My brother and I played this with local co-op, it's a blast! I actually hunt usually for local co-op games, they're sadly a dying breed.
0 Likes

View PC info
Wait... What? The twin stick controls were in-game two years ago, no? :/ I finished it with a friend on two Xbox controllers using left stick for character movement and the right one for targeting. Does twin stick mean something else?
0 Likes

View PC info
Ha, yeah the twin sticks is how we played it..
0 Likes
While you're here, please consider supporting GamingOnLinux on: