The ridiculously large Stardew Valley 1.4 update is out

Stardew Valley, that relaxing and colourful game about taking over a worn-down farm just had a big 1.4 update release with a ton of new content and bug fixes.

The full details of the update are…how do I put this? Humongous? Yeah, that sounds about right. Looking over the changelog, I honestly don't know where to begin to talk about it. 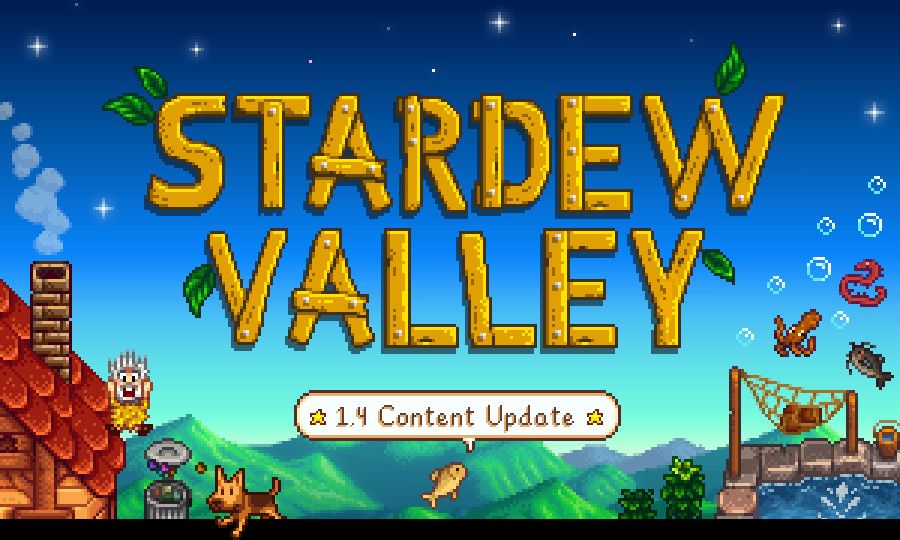 For new content, there's a lot. 24 new hair styles, 181 new shorts, 35 hats, 14 new bottoms (pants) like skirts and shorts, 38 decorative items, two new fish, a Dark Sword, Golden Scythe, Workbench, Woodchipper and…you get the idea right? A lot of new stuff to find. In a relationship you don't like? Give them the boot with a Wilted Bouquet.

Plenty of multiplayer enhancements too. You can have seperated money, private messages, a ping command, a kick command, ban/unban commands, each farmer now has their own separate mailbox and spouse porch area, you can each now build a cellar and more. Nice to see such improvements, gives them the opportunity to keep on expanding what's possible for Stardew online.

On top of that it features a whole bunch of gamepad improvements too! There's an on-screen keyboard, left/right bumper hotkey for inventory menus, improved gamepad navigation in multiple screens, an added ability to stow an item freeing up your hands, switching between keyboard/mouse and gamepad is less finicky, improved placement login for crops and a gamepad and so on.

Another nice addition is the new large screenshot feature, letting you take a shot of your whole farm. I think I have a lot of work to do (click to enlarge): 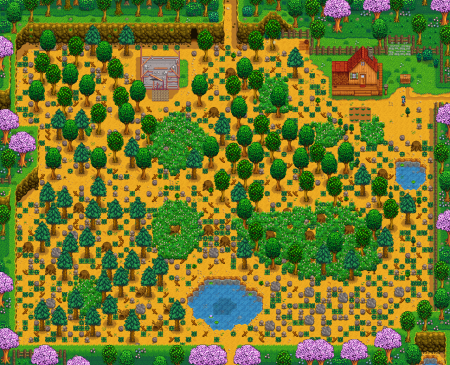 Screenshots are stored in ~/.local/share/StardewValley/Screenshots/

Hard not to laugh at some of it though, like NPCs now actually close their eyes and do a sleeping pose when they go to bed. Poor people, having to sleep with their eyes open until now.

If you head to this page, it contains the full changelog with spoilers, just be prepared to scroll for a while.

If you wish to pick up a copy, you can do so on Humble Store, GOG and Steam. Do I recommend it? Without a doubt in my mind, it's a beautiful game.

View PC info
The fact that the social tab now tracks which items people like or don't like is actually a big change, which saves constantly having to refer to the wiki for that info. And I like the rice farming mechanic.

But most importantly, the kitty sleeps on your bed! I cannot overstress this.
12 Likes, Who?

View PC info
So impressive to see that the dev still works hard on this game, without even charging for the updates, despite he could. Love it. :)
3 Likes, Who?

View PC info
It has been a full day since this was released everywhere, and still GOG hasn't bothered to make it available to us Linux users. I'm so fecking fed up of being treated like a rat by those guys. Like I just wrote over there, they should be very, very glad there are no real competitors for those of us who care about DRM Free games (since humble bundle is just a glorified steam key reseller now).

I've read the changelog, however, and there are a lot of great stuff in there. The gift thing will be very useful for me, that's for sure. Four times in a row I have managed to give gifts on birthdays that were either hated or disliked :D

Expanded shed will be a huge change for people who like to go large (excuse the pun) on jar + keg making. I'm also seeing loads of quality of life stuff, so that's great. Small things like being able to stack kegs, jars, tappers, fishing bobbers will make it easier to manage inventory space. Not sure if that will apply to weapons and rings too, but that could be a nice change for those day-long mining sessions (although it's rare to get more of one of the same type).

I look forward to actually playing it, but knowing GOG near non-existing Linux support, it may not be until the year 2020. It's so bottomlessly frustrating :(

View PC info
GOG has the Windows and Mac builds updated to 1.4 but not Linux yet. I (and my kids!) eagerly await! My eldest really wants separated money. Haha.
0 Likes

Quoting: PangaeaIt has been a full day since this was released everywhere, and still GOG hasn't bothered to make it available to us Linux users. I'm so fecking fed up of being treated like a rat by those guys. Like I just wrote over there, they should be very, very glad there are no real competitors for those of us who care about DRM Free games (since humble bundle is just a glorified steam key reseller now).

I'm happy for what GOG has done, but yeah, there should be a lot more. For that reason, I really wish more of the bigger games would get released to itch.io. Too much work for devs to release yet another build? Well, skip GOG then. itch.io has a decent client for Linux. It's much better than having to go to the GOG website and look at your library for updates and then download THE WHOLE GAME just to apply a patch. So yeah, I've become a fan of itch.io. It just needs more popular games.

EDIT: GOG's poor Linux support makes me appreciate the Steam distribution system. You know that you can release DRM-free games via Steam as well. It's just not the norm.

View PC info
I sent an email directly to the developer to ask about this. Partly to inform about the lack of a GOG Linux build in case he wasn't aware of it, and partly in a hope that he can do something to make this happen on GOG's end. It's very frustrating. Time and time again :( Perhaps Eric has 2000 emails and won't get through it until mid-January, but it was worth a shot.

If it was possible to buy and download the game directly from the developer I'd probably just do that instead to be honest. No more problems.
1 Likes, Who?

const 27 Nov, 2019
View PC info
I really like itch.io a lot and think technically, it's a lot better then gog. It's just missing the critical mass (and the dosbox stuff I don't really care about, to be true).
I sometimes wonder if they should take Android more seriously. Cross-platform purchases would certainly raise interest a lot, but an f-droid style store app with automatic updates is missing for that. With a little more popularity, they could take over the no-drm business from gog to everyones benefit. And why shouldn't they sell apps, too?

View PC info
I'd definitely welcome a DRM Free competitor that cares about Linux. I loved GOG back in the days, but they have changed a lot since then, so there is less reason to be faithful. Probably the only reason they began with Linux at all was that Steam did it, and they've been dragging their feet about it ever since. But all that aside, I find it staggering how they can be so much slower to release for Linux when they get handed the files on a platter from various developers. It's very frustrating. And I bet it's frustrating from the perspective of said developers too.
0 Likes

Quoting: PangaeaI'd definitely welcome a DRM Free competitor that cares about Linux. I loved GOG back in the days, but they have changed a lot since then, so there is less reason to be faithful. Probably the only reason they began with Linux at all was that Steam did it, and they've been dragging their feet about it ever since.

They dragged their feet from the start:
https://www.gamingonlinux.com/articles/gogcom-dont-plan-on-introducing-linux-support-in-the-foreseeable-future-updated.2369
1 Likes, Who?
1/2»
While you're here, please consider supporting GamingOnLinux on: