Liberapay or Buy us a Coffee. You can also buy games using our partner links for GOG and Humble Store.
Amazon's Luna sort of works on linux

I was looking at my email and saw that I was accepted for Luna early access so I spent most of my morning trying it out and this is what I found.

I Live in the US in Pennsylvania so I don’t know how other places will be like but the latency was like Geforce Now so fine not great but not bad and the picture quality was the same as Geforce Now.

First off you need to spoof your user agent so you can play or else you'll get this. 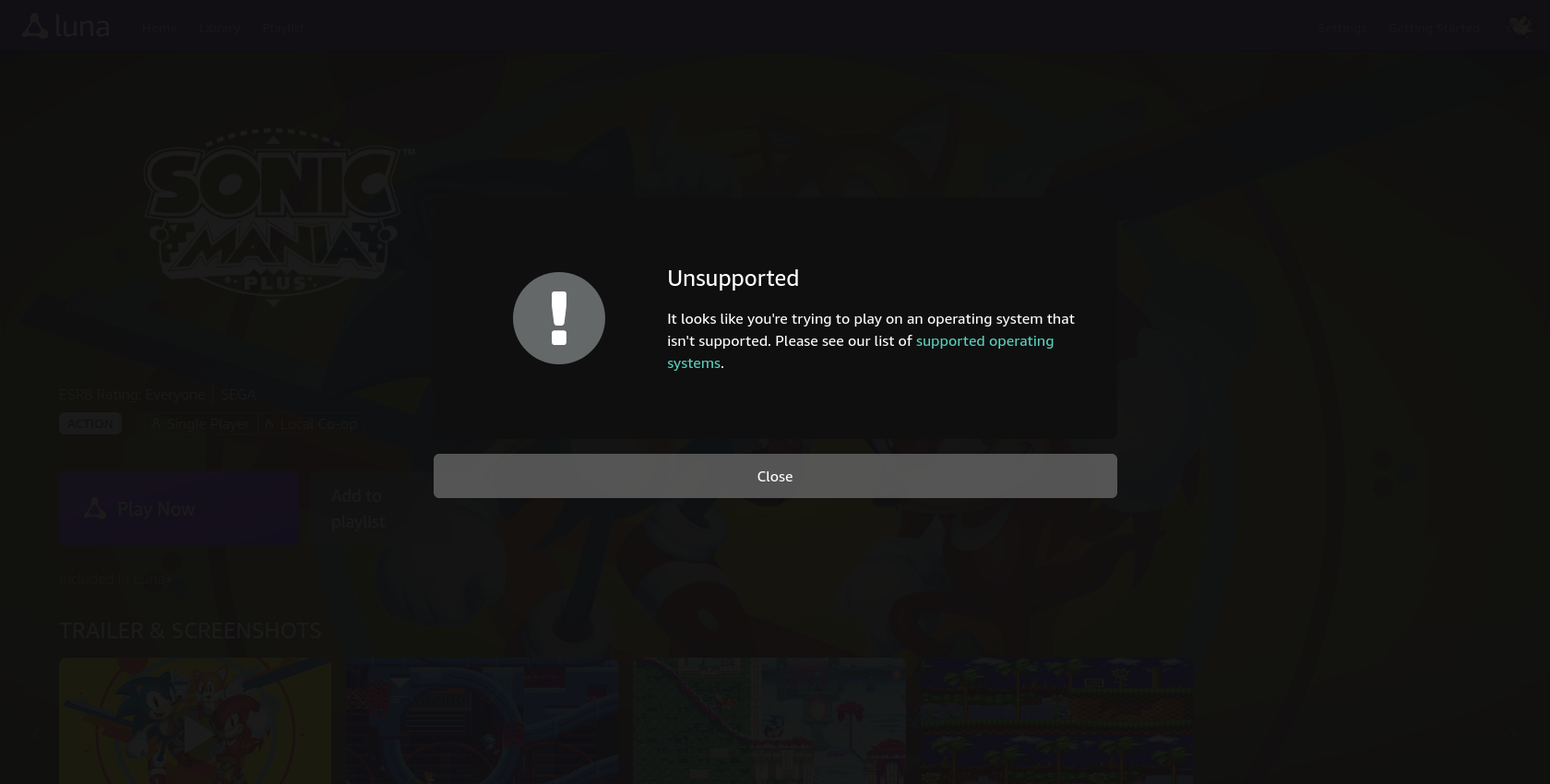 Second it doesn’t work in Firefox I expected this since it say they don't support it but for fun I spoofed it to look like chrome and got this.

Here is what I try it out on
Desktop Manjaro unstable: Degoogled Chromium, Brave, Chrome

I have a youtube video of me trying it out for the first time
https://youtu.be/sSI7CFC3rmE
Music I was listening to was from b e g o t t e n 自杀

I have to wonder what it is that Firefox is missing or not doing that won't let these streaming services work.

Nice to know that at least with a Chromium browser it will though.

That happens with Stadia too, KDE is quite annoying on how it likes to display on top of full-screen stuff :(

Sounds like Stadia is still going to be better on Linux.
0 Likes

Quoting: Liam DaweI have to wonder what it is that Firefox is missing or not doing that won't let these streaming services work.

I just tried Firefox beta 84.0b3 and Firefox ESR 78.5.0esr both on Manjaro because I though that maybe an extension I had was blocking something Luna needed.

Still had to do the spoof on both of course.

Firefox Beta worked but I couldn't get controllers to work and I didn't have any problems with KDE panels when using the keyboard.

I want to test normal Firefox on linux and windows but my friends called early to do stuff so I'll get back to this.

So I did more testing in Firefox the KDE panel thing doesn't happen so you can play the games with mouse and keyboard perfectly fine that about the only thing that's better then chromium based browsers.

TLDR: Controllers are a mess and I don’t understand it, sometime they work, other times they don’t or they prevent any input from working.

Controllers don't work but doesn't prevent inputs from being registered so that’s a plus.

I also tried Geforce Now on Firefox in Manjaro and same problem as Luna but now the mouse doesn't work. So I'm going to take a guess and say that the reason they don't use Firefox is that controllers don't really work and they don’t want to fix the problem since it works in chromium based browsers or Firefox needs to fix the problem.

i am not a fan of cloud gaming since it really depending on your network and you need to have a stable connection.
i have not Tried Amazon yet but I didn't like Geforce Now. if I really want something like that I would set up my own steam pc and use the steam link to play on instead work better and is fully controller supported.
0 Likes
While you're here, please consider supporting GamingOnLinux on: