Liberapay or Buy us a Coffee. You can also buy games using our partner links for GOG and Humble Store.
Bungie's Marathon Trilogy as a Flatpaks 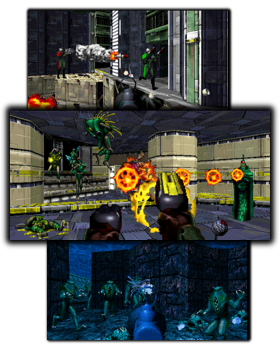 So I've been working on packaging up the Marathon games via the open source Aleph One engine
. These are FPS games Bungie made in the 90's that can be roughly summed up as 50% Doom and 50% Halo. The games' code has been open source for a couple decades, and the game data has been freely available for nearly as long, though under a bit of an un-license. Mac/Windows versions of the engine bundled with the game data have been available for a while now, and Bungie even promoted them on their blog a decade ago. It wasn't until a few months ago even that the Aleph One maintainer got formal permission from Bungie to distribute them this way. Similarly, there is an iOS port that seems to be distributed in this legal grey area too. Apparently it's the legal ambiguity that blocks distros from just including the games in their repositories, and so the official Linux download is still compile-it-yourself source code.

Anyway, I've been working on packaging the games as Flatpaks with the intention of getting them on Flathub. Building them was relatively straightforward. The Flatpak tools are easy enough, if a bit complicated and odd. The Aleph One maintainer isn't a fan of Flatpak, but considers it a reasonable solution to Linux builds if someone is willing do most of the footwork. :)

For now you can get the .flatpak files from here:
Marathon
Marathon: Durandal
Marathon: Infinity

Please test them and let me know what you think! If you get stuck on a level, don't hesitate to peek at the level guide on L'howon.org The game is from the 90's, and definitely won't feel like a modern FPS that never lets you get lost. :)
1 Likes, Who?
While you're here, please consider supporting GamingOnLinux on: