This website makes use of cookies to enhance your browsing experience and provide additional functionality -> More info Deny Cookies - Allow Cookies
⨯ We're live now on Twitch!
⨯ Confused on Steam Play and Proton? Be sure to check out our guide.
Weekend Play List 7/22/22
itscalledreality 22 Jul

A long endless highway road stretches ahead of you over a flat plane and disappears into the horizon. This road is taking you somewhere far away from your typical comforts. A vacation they call it, but it’s no vacation for you. You sigh as you think of your computers powered down in a quiet room, no one there to press it’s buttons. In fact this whole trip is starting to press your buttons!

Your sibling, imaginary or real sits one seat behind you prodding you with questions and fingers.

I fiddled a bit with Prince of Persia: Warrior Within, mostly to make sure it ran okay on my system. Then I decided I’m finally ready to return to roguelike world of From Software and finally clicked play on Elden Ring.

I began to wonder what else has From Software made? It turns out they made a game for Windows/Xbox a while back called Ninja Blade. It has been delisted from Steam BUT you can still get a Steam code on Green Man Gaming. For the short hour I messed around with it, that game is nothing like Dark Souls. Maybe it’s closer to Sekiro (but I’ve never played).

I am visiting family this week so I will probably not post next Friday, but I return Saturday so maybe we’ll get a Sat/Sun post out of it.

Have a great week!

Thankfully, the dangerously-hot UK temperatures from last weekend and early this week have finally cooled down, and the associated health-warning has been rescinded as far as I know, so I won't be melting whilst trying to play stuff this weekend. 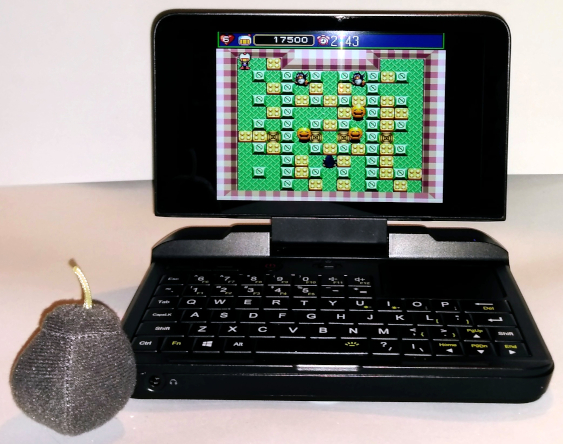 It's an outing for the palmtop this time around, with 1997's Super Bomberman 5 for the SNES - the last of the two Japan-only Super Bomberman titles (1 and 2 were released worldwide, 3 skipped North America but was released everywhere else, and 4 and 5 were Japan-only but have fan-made translation patches available nowadays), and the last of that series on the SNES overall as well. Due to how the SNES installments handle cornering, these titles play really well on the tiny clicky thumb-keyboard of this particular device (other installments for other systems can be an exercise in unplayability on this hardware, unfortunately).

I've actually been putting this one off because it's my least favourite of the SNES titles - the animation style is a bit overcooked for my liking, the music lacks the punch of the other four, and I don't find the bosses as fun as in the other entries. It still has the same solid gameplay underneath, though, so I guess I'll have to see if it grows on me. I've played through the other four Super Bomberman games, though, so I'm not leaving this one unfinished. 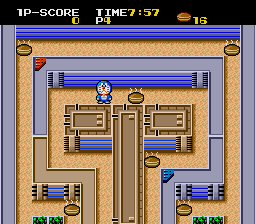 Image from MobyGames.
Elsewhere, I'll also be finishing up 1989's Doraemon Meikyuu Daisakusen for the PC Engine/TurboGrafx-16, which is a Doraemon-branded spiritual-successor to 1979's Heiankyo Alien, with a bit of a convoluted history. I started it during the week and I'm a little bit over halfway through it right now.

It was released in English in 1990 as "Cratermaze", but I've liked Doraemon since I was a youngster (I discovered him via the video games import scene, funnily enough, but he otherwise wasn't and isn't known in the UK), so I prefer the Doraemon version and its incredibly catchy soundtrack. It's a fine game either way, though; It has the same inverse difficulty-curve and "digital bubble-wrap" vibe as the single-player Bomberman outings, and I really like that about it.

The bite-sized caravan-style Star Fox Super Weekend Competition and Donkey Kong Country Competition Cartridge mini-games, which were used at official Nintendo events in the 1990s, will also be putting in appearances when I'm hanging around waiting for things.
2 Likes, Who?

Glad the heat wave is over for you guys.

With the forecast of heat index to be 38 today, I'm doing morning activities outside and afternoon will be indoor time. These temps aren't rare here, but it's still hot, especially with 70%+ humidity. Might do so Monster Sanctuary or figure out how to do Wake on Lan on my PC.

Well it looks like a thunderstorm is running in as I type this from our local park..., so I guess indoor time is getting moved up. Hopefully it'll break the heat for a bit. I love the rain, especially when gaming! 😁

I finished up Super Bomberman 5 yesterday. It did not change my opinion, and my favourite of the SNES installments remains 3.

I intend to finish up the remaining 30-ish stages of Doraemon Meikyuu Daisakusen today; I've gone through it on the Easy mode for this revisit, because I can see myself revisiting it again to go through Difficult (which adds more enemy types that don't even appear otherwise) some other time.

EDIT: I finished up Doraemon, which was a great time, and since I'd already ploughed through both of my weekend picks, I also completed the 1985 Famicom version of Bomberman. It's not the first game in the series (that honour goes to 1983's Bakudan Otoko/Eric and the Floaters), but it is considered to be its true start (no multi-player here, though). I put this one off for a really long time because I wasn't sure if it would be too archaic today, but it's actually held up very well, and I had a great time with it. 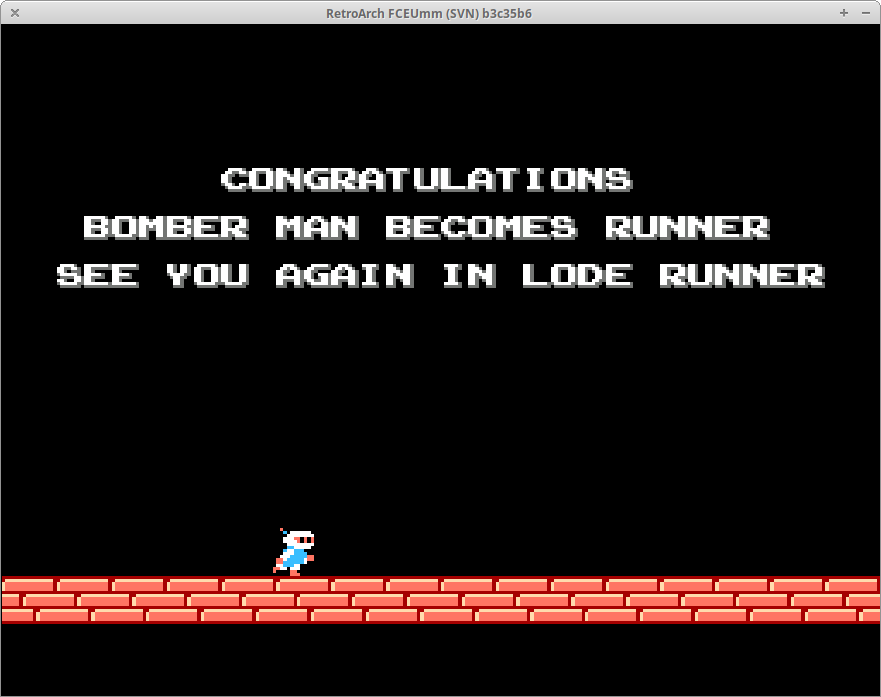 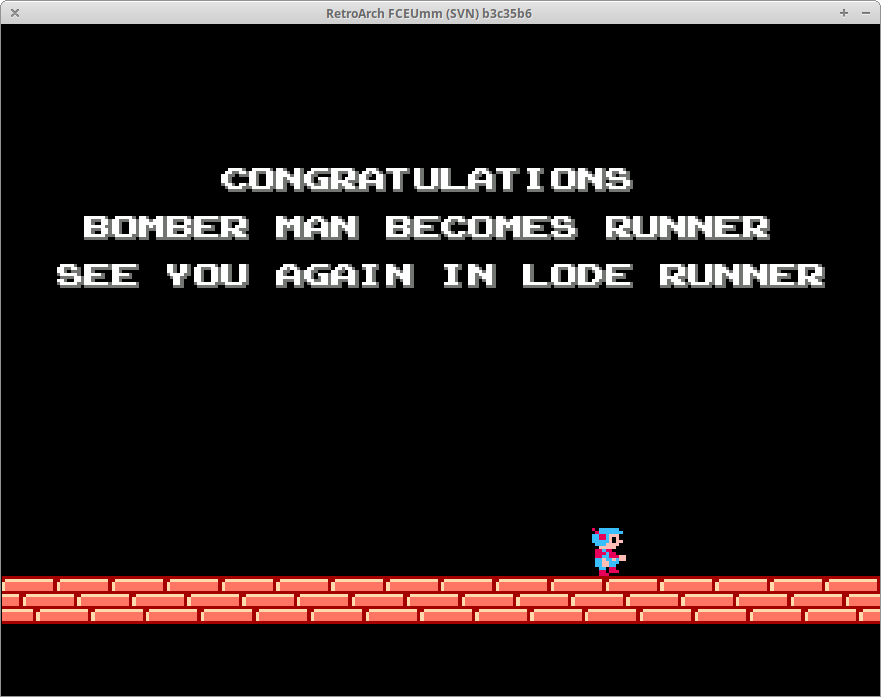 I quite like how, as the series was separated from Hudson Soft's licensed Lode Runner titles, this "Bomberman became human" ending (which existed entirely as a cross-promotion) went from the robot literally becoming a human, to the more figurative idea that he earned his rights and freedoms when he escaped the underground compound that he came from.

Three games finished in one weekend - not bad.

Quoting: denyasisGlad the heat wave is over for you guys.

Thanks - it was hellish!

Unfortunately it's looking to become the norm going forward, which isn't great in a country where most buildings are designed to keep the heat inside.

Health-warnings aside, it wasn't great for gaming, either (which is a nuisance when it's not wise to be outside) - it was the first time that I ever heard the fan on my GPD Win Max 2021 going at full-tilt, at which point it sounded like a whiny jet-engine. I kept it cool and watched movies and YouTube instead, after that!

Quoting: denyasisWell it looks like a thunderstorm is running in as I type this from our local park..., so I guess indoor time is getting moved up. Hopefully it'll break the heat for a bit. I love the rain, especially when gaming! 😁

I hope that a storm heads my way soon, since the ones that were forecast post-heatwave didn't pan out everywhere in the country, unfortunately.

I also like rain that appears in games, for some reason.

When I was a kid I used to compare which rainy stages/sequences/scenes in games I liked the best, haha.

Between the heat I did only a few bits of gaming. Played through most of Budget Cuts in VR. Hope temperatures will allow me to finish it this week. And spend quite a few hours going through Last Call BBS.
2 Likes, Who?

Been playing a lot of card games like Firefly Fluxx, Ravensburger Alien Fate of The Nostromo and DC Deck-Building Game all of this past weekend with friends and family while taking turn running the grill and hitting the pool.

Video game wise been playing rail shooters on ReDream and GoNNER but less then 4 games of that one.
2 Likes, Who?
While you're here, please consider supporting GamingOnLinux on: