Hi, we are a young indie game studio from Nantes, in France, and we have recently finished our first complete game: Andy's Super Great Park. It is available for Windows and Ubuntu. A demo can be downloaded from the website and we are planning to release it for other distributions. Let me talk about the game. 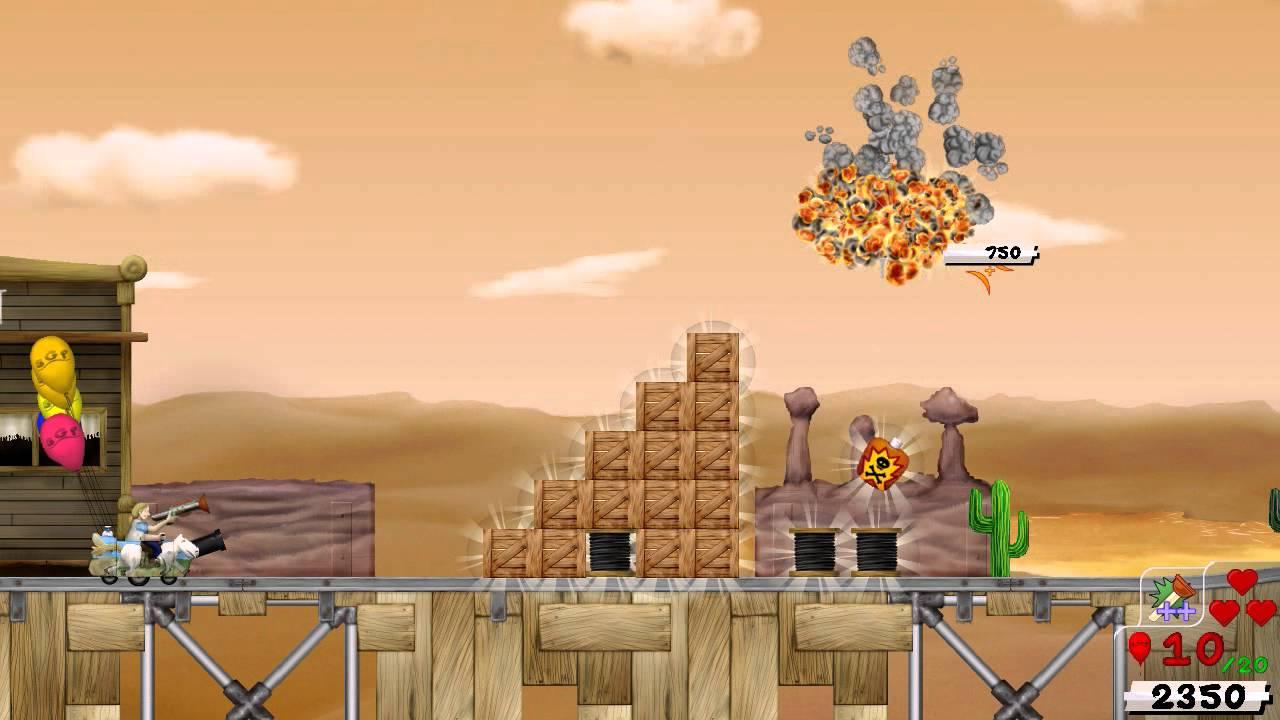 Andy and Brian are two inventive kids who know how to build marvelous things. Their last toy? A theme park! It's been days they enjoy riding the roller coasters at full speed while frightening with their plunger guns the birds that invaded the park. For the most tenacious, the kids have even installed a cannon on their carts!

It is in this friendly ambiance that comes the question of the park's name. Surprisingly the boys are incapable of coming to an agreement! Each one stands his ground until Brian, frustrated, shoots a cannonball toward Andy's cart! When these kids quarrel, there is no half-measure....

Under the impact, the balloons that were in Andy's cart are scattered through the park. War is declared! While Andy goes on the tracks to retrieve his balloons, Brian takes off in an helicopter and drops obstacles on his friend's path.

Through 25 main levels, the player has to retrieve a minimum number of balloons using his plunger gun while avoiding collisions with the obstacles dropped on the path (explosive zeppelins, crates, TNT...). The player can try to get the best scores and unlock up to 18 extra levels. Finally, the adventure is punctuated by fierce fights against a tough rival, where the abilities learned in the main levels are exploited.

The gameplay is an inventive and easy to learn combination of both the platform and shoot 'em up genres, where every action can be simply done with a mouse.

Grabbing balloons with a plunger gun, shooting birds with a cannon and exploding everything else, all while riding a roller coaster: this is Andy's Super Great Park!


Roller coaster ride in a vehicle without brakes to exercise the reflexes,

5 level themes combined with 5 sets of obstacles for a great variety of situations.

What do you think about our game? On which distribution would you want it to be released? Article taken from GamingOnLinux.com.
Tags: Misc
0 Likes
We do often include affiliate links to earn us some pennies. We are currently affiliated with GOG, Humble Store and Paradox Interactive. See more here.
Some you may have missed, popular articles from the last month:
The comments on this article are closed.
4 comments

Bumadar 24 Dec, 2012
the game looks quiet nice from the video, colorfull and clear. I guess a store like Desura or Steam or even Ubuntu store will make it easier for you guys to sell stuff. I don't even know if other distro's have stores ? I would personally not buy something from a distro only store simply because I got no idea I would still be using that distro next year :) But if you mean the packaging itself, I would suggest try http://openbuildservice.org/ , it can build any package you can think off but I would be okay with just a tar.gz myself or a generic installer.

anyways enough bla bla bla from me, I like the look of the game.
0 Likes

View PC info
I would get it available for other distros as soon as possible this got downvoted on reddit because of "Windows and Ubuntu".
0 Likes
Stuffomatic 26 Dec, 2012
Thanks for the comments. Unfortunately a static Linux build is not possible yet but we are working on the packaging for Debian and we try to build for other distribs in response to the users demands.
0 Likes
Stuffomatic 4 Jan, 2013
Guess what, we now have generic binaries for the Linux version! Check the demo and share: http://www.stuff-o-matic.com/asgp/
0 Likes
While you're here, please consider supporting GamingOnLinux on: