- Heavy Customization: 4 unique species, 12 parts slot with hundreds of options to choose from

- Occulus Rift: Enter the cockpit and be in the action

- Cross platform servers: LINUX games use the same servers as PC and MAC players, providing a larger teammates/opponent base.

The game has received excellent reception:

"The first game in 15 years that's going to make me buy a joystick for my PC"
- James Portnow, Extra Credits

GoD Factory: Wingmen is currently on Steam Greenlight and Kickstarter. A PC alpha preview is available to try for free for the month of July. LINUX alpha preview is being considered, but no promises there. 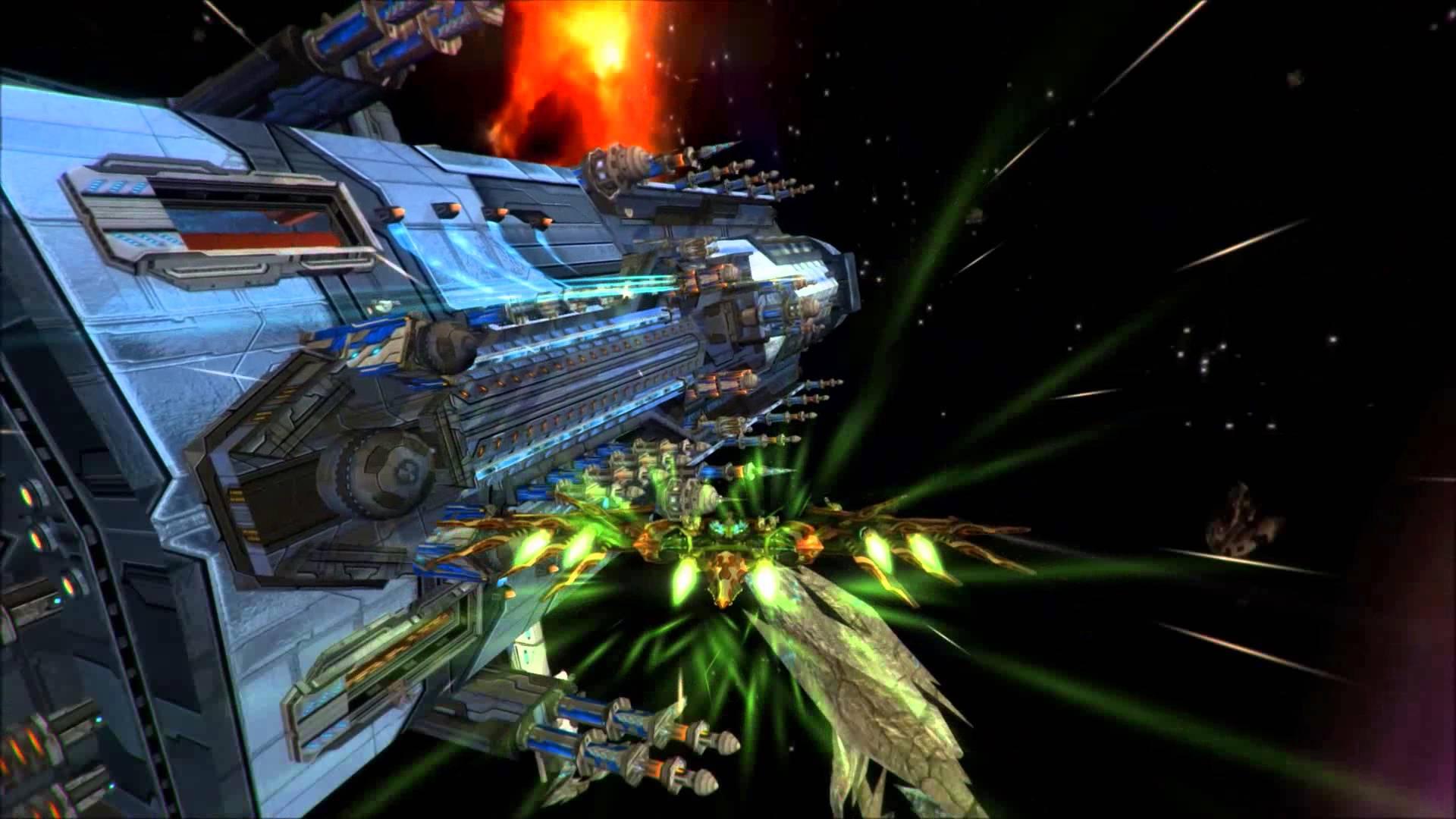 KickStarter: http://www.kickstarter.com/projects/ninedots/god-factory-wingmen?ref=home_location Article taken from GamingOnLinux.com.
Tags: Crowdfunding, Indie Game, Steam, Unity, Upcoming
0 Likes
We do often include affiliate links to earn us some pennies. We are currently affiliated with GOG and Humble Store. See more here.
Some you may have missed, popular articles from the last month:
The comments on this article are closed.
7 comments
s_d 4 Jul, 2013

The alpha gameplay looks fantastic, very colorful... but I have to wonder.  Why announce this in the final two days of their Kickstarter?  Why not pick up hundreds of Linux gamers in the first week instead?

I saw this title on Kickstarter several weeks ago, watched the pitch video, only to be sorely disappointed to see "Linux is also a possibility, but no promise as of yet."  So, not only did I refuse to pledge, but also why bother spreading the word about the game to anyone else?  My energies are finite, and we see many wonderful looking games on Kickstarter which promise us Linux support, or at the bare minimum are able to divulge a stretchgoal price, so why waste this energy on projects that choose not to commit to us?  It's frustrating.

That said, I can't really blame the devs for coming to our way of thinking eventually, but I do think it's a damn shame that they were unable to avail themselves of our enthusiasm early in the campaign, when the momentum is so crucial.
0 Likes
François Chéné 4 Jul, 2013
Hi there s_d,

Thanks for commenting! To answer your questions, when we started the Kickstarter 6 weeks ago, the Platform support was still uncertain. GoD Factory is not just an upcoming title; it's a full franchise we wish to build upon. If we are to commit our Wingmen to a platform, we wish to bring the full franchise on it. And just like you, our energies are finite. So we had to make sure we had the resources to pull it off and if it would reward.

Six weeks ago, we didn’t know about that. God Factory: Wingmen being our first major project, we could not tell how much energies it would require to bring our games LINUX, and since the LINUX community is relatively recent, we didn’t knew how much it would reward to spend it there. We didn’t want to lie and say we would support a LINUX while we weren’t sure we could pull it off, so we just said we were considering it to see if LINUX users were interested in buying our game.

We quickly got requests from the LINUX community, so we tried to pull a LINUX build and thanks to Unity3D it appeared that 95% of the work was already done, thus there was no reason to hesitate further and so we announced the LINUX release two weeks ago. Unluckily, the remaining 5% is vital to the alpha preview and that’s why it is PC only at the moment.

We published this article now because, as you say we must ride the momentum and there is no higher momentum than the last three days of a Kickstarter.

Once again, thanks for your interest and I really hope this will respond to your concerns. Should you have any further question don’t hesitate and we’ll gladly respond!

Alex V.Sharp 5 Jul, 2013
View PC info
I do find it may be just a bit too late to raise the necessary fund now. Not impossible, but highly unlikely imho.
Could you perhaps tell us of your plans after the Kickstarter ends?

Ah, OK... I understand.  Still a pity you were not aware at the beginning, but Kickstarters are always such volatile beasts, and it is reasonable.  Yes, we are small still, but growing quickly!  I hope you can be successful, against the odds, and welcome to our community!  :D

It is true that not every project has a great success on our platform.  On one hand, your countrymen with Tribute Games ported a game to Linux and hadn't enough success to justify continued Linux development (their game Wizorb), but in contrast, another studio in Canada, Gaslamp Games (their game, Dungeons of Dredmor), has had great success!  It's a complex mix of the type of game itself coupled with your ability to cleverly market it.

It is my feeling that very small studios are best positioned to take a chance on us when they feel very good about the community and begin to connect with us, and when the threshold for portability is low.  It seems that all the right signs line up for Wingmen!  For the first (feeling & community), you've started off really well by selecting a beloved and under-served genre (space sim), and added-in something lacking widely on our platform, i.e., the competitive multi-player capabilities.  We haven't many of that combination!  In fact, I'm not even aware of one (someone will come correct me if I'm wrong, of course)

For the second, portability should be more possible due to your wise choice of a highly portable game engine.

Of course, at this point, you need to be funded first.  We will do what we can :)
0 Likes
François Chéné 5 Jul, 2013
I won't lie and say that it will be easy, especially after yesterday's catastrophe. But as long as we don't lose hope, there is still a chance that we can make it on Kickstarter. Should we fail there, we will be in a very precarious position as most of the team have been working for around two years with no salaries.BIlls have piled upand ressources have grown thin, but we won't give up the fight. There are no set plans ATM, since we prefer to concentrate our efforts on making the ickstarter happen, but should that fail the most likely scenario will look like an alpha funding.

As for portabilty, Unity3D is indeed very portable. When we made our tests, the longest part was to set Ubuntu with the pilots on my machine. Once that was done, Unity3d and Photon (a service pack with pluggins for Unity3D and cloud hosting servers) performed really well. We were instantly able to play cross-Platform games.

Man, that just sounds so promising!

I really wish there was some good way to recapture a large portion of your 800 backers and $30k of funding, like a relaunched Kickstarter campaign for a somewhat smaller game?  I'm not really sure.  I know that alpha-funding can work for some, but it's pretty much like a Kickstarter, but continuously promoting without a break.  Nobody can do that forever!

I do see that none of the reward tiers include gift keys to your past game (Brand), which is always a lovely enticement, and also reminds your new visitors that you already are a professional game development studio with a cool title already.  If you choose to launch a Kickstarter to follow up this one, I suggest adding keys to your past games, if you can do so in a cost-effective way.  Indies always forget to to do this!  Also, it will give at least your Windows gaming fans something to play while waiting between releases of Wingmen :)

On another note... I wonder if any luck has been had trying to build Brand for Linux & Mac via Flibitijibibo's branch of MonoGame specially for porting XNA games...  supposedly he's ported entire games in a matter of days with his MonoGame branch.
0 Likes
François Chéné 7 Jul, 2013
Brand was not included as a reward tier because it is currently being remade in Unity3D for a re-release on its own.
0 Likes
While you're here, please consider supporting GamingOnLinux on: