Scraps is a vehicle combat game where you have the freedom to design your vehicle from the chassis up. Start by choosing a chassis and method of propulsion (wheels, tracks, hover), then attach a cockpit, weapons, engines, power and so on to the base or to other parts. 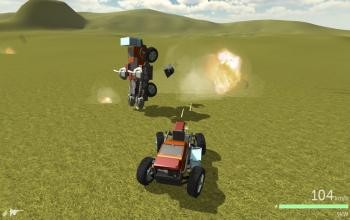 We have covered it before because it just looks awesome, the great news is that it has hit the Kickstarter goal and has also been greenlit so in a not too distant future it will be on Steam! It only has three days left on Kickstarter too so your chance to get in early is running out folks.

You can download an early demo to get a feel of it before you pledge too!

We don't really have any game like this yet on Linux, to be fair I can't even think of an up-to-date vehicle combat game out right now either, so it's a good win to see this.

Article taken from GamingOnLinux.com.
Tags: Action, Crowdfunding, Indie Game, Racing, Steam, Upcoming
0 Likes
We do often include affiliate links to earn us some pennies. We are currently affiliated with GOG, Humble Store and Paradox Interactive. See more here.
About the author - Liam Dawe

I am the owner of GamingOnLinux. After discovering Linux back in the days of Mandrake in 2003, I constantly came back to check on the progress of Linux until Ubuntu appeared on the scene and it helped me to really love it. You can reach me easily by emailing GamingOnLinux directly.
See more from me
Some you may have missed, popular articles from the last month:
The comments on this article are closed.
2 comments
Anonymous 14 Dec, 2013
It does look good, I hope the MP works.
0 Likes
Anonimous 17 Dec, 2013
We have Zero Ballistics...
0 Likes